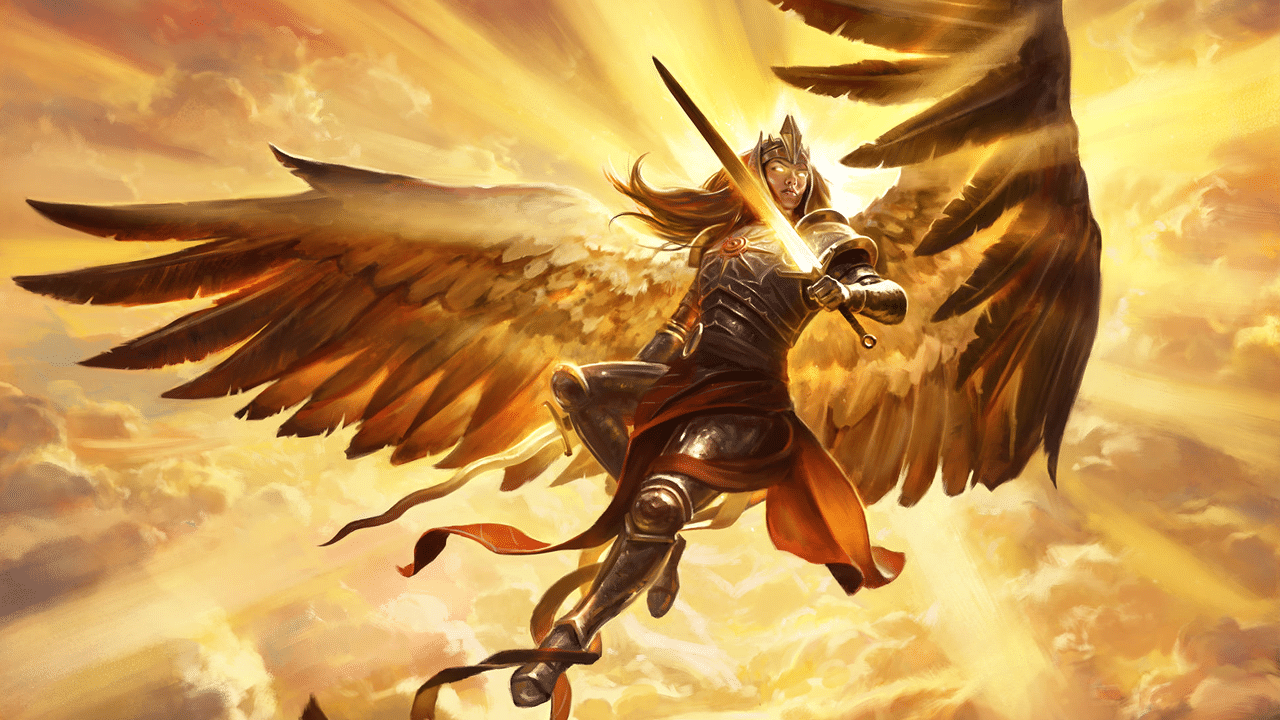 The 10 Best Angels In MTG

Do you ever feel a need to smite your opponents?

It’s not always enough to simply defeat them; sometimes you want to bring your wrath down upon them like a heavenly being.

While there are lots of Gods in MTG now, we all know that it’s the Angels that do all of the work.

So, here are the 10 best Angels in Magic: The Gathering.

The 10 best Angels in MTG

Good lord, there are some great Angels to choose from in MTG. There are all-stars in different formats we’ve missed here, but it’s a good list that covers a little bit of everything, albeit with a larger focus on Commander.

We would have put Iona, Sheild of Emeria in here, but they’re banned in Commander and a little too pricey for other formats. As a result, these are the best Angels in MTG, in our opinions.

First up is Linvala, Keeper of Silence. This version of Linvala is a four mana White 3/4 with flying that makes it so that your opponents can’t use activated abilities of Creatures they control. While this isn’t something that’s going to be relevant in every game, it comes in very handy against specific decks.

It’s because of this that you can often find Linvala, Keeper of Secrets, in the vicinity of any deck looking to disrupt its opponent’s game plan. Stuff like Death and Taxes, for example.

Sometimes you just need a really silly life-based combo, and when you’ve got that feeling, Archangel of Thune should be very high up on your list of people to call. Archangel of Thune is a five mana White 3/4 with flying and lifelink, which is aggressively fine.

The real power is that whenever you gain life, you get to put a +1/+1 counter on each Creature you control. If you’ve got a way to gain life with ease (Spike Feeder) and then also use those counters to fuel something else (Walking Ballista), then you’ve very quickly got the kind of synergy that will absolutely end a person’s career. Not yours though, you’re probably immortal now.

Platinum Angel has text on it that says, “You can’t lose the game and your opponents can’t win the game”. Despite that, it’s not the best Angel around, because it costs a fair bit and is kind of squishy.

You see, Platinum Angel is a seven mana 4/4 Artifact Creature with flying that also has that wonderful sentence on it. It’s a great sentence, one of the best around for sure, but it’s not hard to kill Artifacts or a 4/4, not really. While you should 100% have this in your Angel-based Commander deck, you are also going to need ways to protect it or recur it.

If you’re looking for a bit of recursion and you happen to be playing Plains in your deck, then you need to have Emeria Shepherd around. For seven mana, you get a 4/4 White Creature with flying. They also have a landfall trigger, and that’s where things get fun.

Every time a Land enters under your control, you can return a nonland permanent to your hand from your graveyard. However, if the Land happens to be a Plains, you get to return that nonland permanent to the battlefield instead. It’s an incredibly potent ability, and an essential card in any deck that has a decent number of Plains in it.

While Archangel Avacyn is a good card, Avacyn, Angel of Hope is just a little bit better. For starters, this version of Avacyn is an eight mana White 8/8 with flying, vigilance, and indestructible. Those are some very good keywords on their own, and if you can someone reduce the cost of Avacyn here, then you’ll be laughing.

Also, she gives all of your other permanents indestructible too. Not really sure what else to say about that; it’s just very hard to argue with that as an ability, you know?

Read More: Have a look at these amazing X-Men custom MTG cards

We are finally at the point where we’re seeing a bit more color in our picks. Gisela, Blade of Goldnight is a seven mana Red/White 5/5 with flying and first strike. As ever, the stats are fine, but it’s all about the abilities here, because in reality, she is more of a 10/5.

You see, not only does she halve any damage dealt to your or your permanents, but she also doubles the damage you deal to your opponents and their permanents. It’s not very hard to imagine how rapidly this can become game-ending in a deck filled with flying Creatures.

Our second Boros Angel is Aurelia, the Warleader. Aurelia is once again seven mana, Red and White, but this time around is a 3/4 with flying, vigilance, and haste. Also, whenever she attacks for the first time each turn, you get to untap all of your Creatures and then have another combat phase.

We talked about Helm of the Host in our list of the best Equipment in MTG. Well, if you want an example of just how absurd it can be, put it on Aurelia and then spend the rest of the game taking combat phases until you’ve won.

Back to solo White again for Lyra Dawnbringer. The placement here may seem off to some people because you could very easily argue that Aurelia or Gisela is a better card. However, if what you’re looking for in life is Angels, then Lyra is a far more important choice.

As a five mana 5/5 with flying, first strike, and lifelink, Lyra stands on her own without any other text. This is MTG, though, and keyword soup is rarely enough to warrant putting a card on any best-of list. Thankfully, Lyra also gives all of your other Angels +1/+1 and lifelink, and that’s more than enough to make her an obnoxiously powerful card when surrounded by her winged friends, and definitely one of the best Angels in MTG.

There are two versions of Kaalia, and to be frank, one is good, and one is bad. Needless to say, this is the good one. Kaalia of the Vast is a four mana Red, White, Black Creature that is a 2/2 with flying. She’s one of the more popular commanders around for people looking to do very silly things.

Her ability allows you to put an Angel, Demon, or Dragon Creature into play from your hand whenever you attack. That’s not all though, that Creature will also come in tapped and attacking. It’s like expecting to be hit by a 2/2 in the air only to be instantly killed because of Master of Cruelties.

Finally, we have Atraxa, Praetors’ Voice. Atraxa costs one Green, one White, one Blue, and one Black mana. For this, you get a 4/4 with flying, vigilance, deathtouch, and lifelink. That would probably be enough to deserve a spot on this list anyway, but her real power comes when you build around her.

Her ability lets you proliferate in your end step. All you need is to make sure that you’re putting counters on things, whether that’s Creatures or Planeswalker, or even Poison counters on opponents, and you can make the most of this incredibly powerful ability. Also, she’s an Angel Horror, which is incredibly metal.