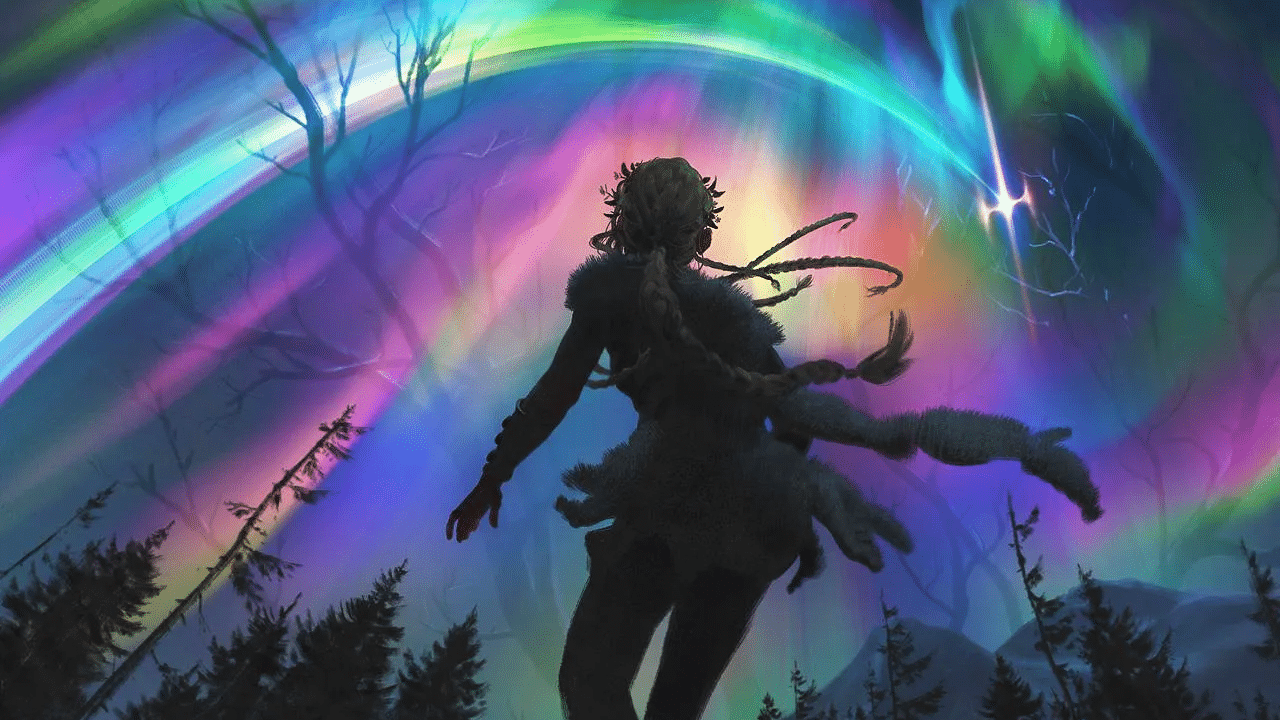 The Best Five-Color Commanders In MTG

We wrote about the need for more Colorless commanders earlier on this week, and we’re still kind of sad about it.

However, to boost both our spirits and yours, we’ve decided to take a look at the other side of things.

That’s right; we’re going to take a look at the best five-color commanders in, well, Commander. Get ready to taste the rainbow?

A brief dishonorable mention for all of the Sliver commanders. We see you, we do not respect you, and you will not be on this list.

You might be a Sliver player, and if you’re happy being a villain, then that’s cool and all, but we aren’t about that.

We can now move into the list of the best five-color commanders, so let’s cover ourselves in paint and roll around for a bit.

First up, we have Child of Alara, which is one of the creepier commanders around due to it being a gigantic all-destroying baby. This isn’t all that out there for anyone with a toddler, but it remains a little odd to see it leading the charge in a deck.

While Child of Alara is still a powerful commander, this 6/6 for WUBRG (One White, Blue, Black, Red, and Green mana) and its ability to destroy all nonland permanents upon death, isn’t all that exciting. It used to see a fair amount of play due to being one of the very limited number of five-color commanders, but we’ve had a huge influx of new ones in recent years, so it’s simply not as good any more.

Kenrith, the Returned King, is a five mana White 5/5 with one ability in each color. Red lets you give all Creatures trample and haste until end of turn, Green lets you put a +1/+1 counter on a Creature, White allows you to give a play five life, Blue makes a player draw a card, and Black resurrects a Creature from its owner’s graveyard.

You’ll notice that none of those abilities specifically say that they have to be used on yourself. This makes Kenrith a fair and wise king who gives to all. As a result, he’s a very good choice for a group hug deck, and who doesn’t love a good hug?

Read More: Should Paradox Engine Be Unbanned in Commander?

Good old Niv-Mizzet got an upgrade back in War of the Spark and gained three whole colors as a result. Niv-Mizzet Reborn costs WUBRG for a 6/6 flying Dragon Avatar. That’s an incredibly cool title, and while the ability takes a little work, it’s worth it.

When Niv-Mizzet Reborn enters the battlefield, you reveal the top ten cards of your library and then for each color pair, you choose a card that’s exactly those colors from among them. You then get to put those in your hand. As long as you build your deck with this in mind, you should be drawing around five cards a time, and that’s incredibly powerful, especially if you pair it with a way to get mana like our next card…

Ramos, Dragon Engine is a fun card for Dragon decks, but really shines in any deck with a lot of five-color cards in it. Ramos is a six mana 4/4 with Flying that gets a +1/+1 counter for each color in a spell every time you cast one.

You can then remove five +1/+1 counter from them to gain two of each color. This allows you to cast an incredible amount of spells, and if you’re specifically filling your deck with five-color cards, then you’re going to be able to gain ten mana for every single spell you cast. It’s a little silly for sure, but in the best possible way.

Esika, God of the Tree // The Prismatic Bridge

When it’s in play, you reveal cards from the top of your library until you reveal a Creature or Planeswalker, then you put that card into play. Free cards are so much better than cards you have to pay for, and being able to land this on turn five (or earlier) is sure to make you a target, but could also make you unstoppable.

While casting stuff for free is good, Jodah can make everything cheaper, and he’s a little more reliable than The Prismatic Bridge because you get to choose what you’re casting. Jodah costs one generic mana, one blue, one red, and one white, and has flying and is a 4/3.

However, Jodah lets you cast all of your spells for WUBRG. Having a Chromatic Lantern out solves any issues that this may cause, and while the ability might not seem absurd at first, it does let you cast things like Omniscience for half the mana. So, uh, Jodah good!

Sisay, Weatherlight Captain runs one hell of a ship. Sisay is a three-mana White 2/2 who gets +1/+1 for each color among other Legendary permanents you control. That means you can make her as big as a 7/7 without even having to use counters or anything.

Her ability costs WUBRG, and it lets you put a Legendary permanent from your Library into play as long as it’s mana cost is less than her power. This not only means you can help keep her nice and strong, but also means you can have an answer to nearly anything and bring it out at instant speed.

We’re out of mana and free stuff for a little bit to focus on raw attack power, and none of the other best five-color commanders does aggression quite as well as Najeela, the Blade-Blossom. For three mana, you get a Red 3/2 that gives you an attacking 1/1 Warrior token whenever a Warrior attacks.

Then, for WURBG, you can untap all attacking Creatures; they all gain trample, lifelink, and haste until the end of turn, and then you get another combat phase this turn. You can only activate the ability in combat, but there’s no limit to how many times you can do it. You will absolutely upset whoever you attack like this, but who cares? They’ll be out of the game soon.

Dragons are the best Creature type in MTG; thank you for coming to our TED talk. Scion of the Ur-Dragon is also the best Dragon commander, because it can be any Dragon in your deck, and you can very easily kill off your opponents in a single attack from this shapeshifting beast of a Creature.

You cast Scion for WURBG, and it’s a flying 4/4 as standard, but you can pay two mana to find a Dragon from your Library, put it in the graveyard, and then have Scion turn into it until the end of the turn. It allows for a lot of fun strategies, all of which have wings, scales, and the ability to breathe fire.