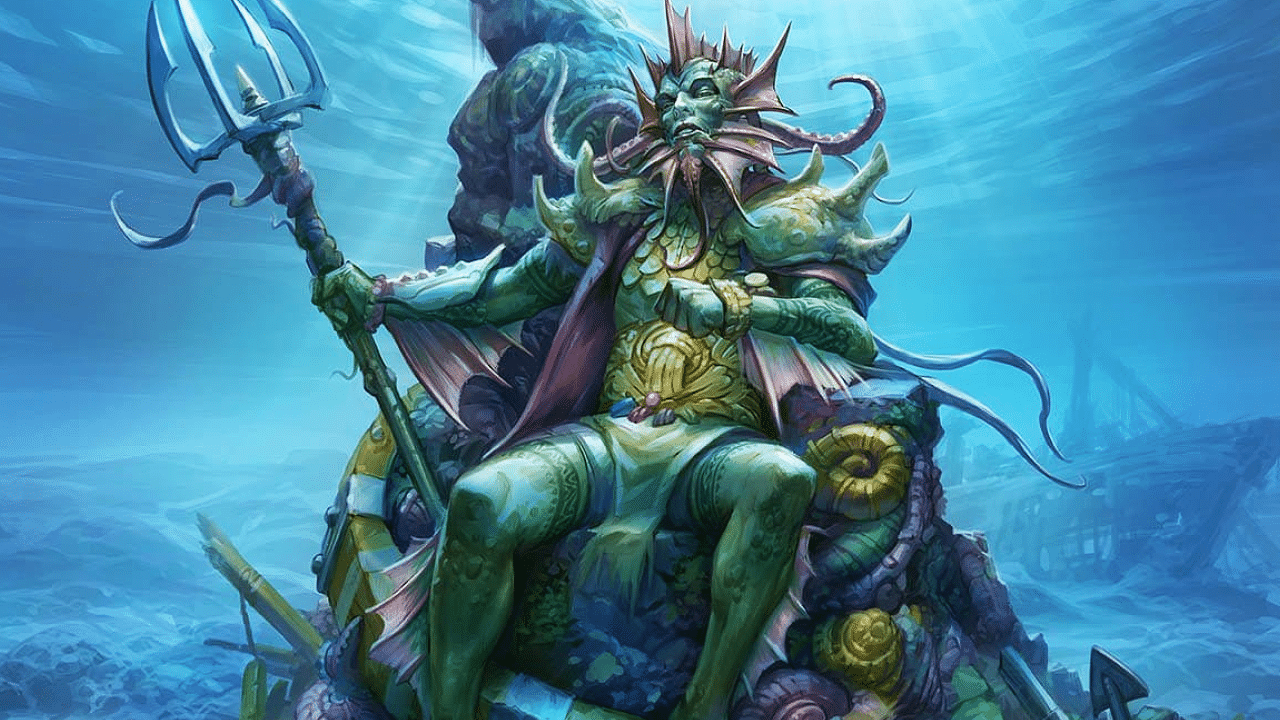 The 10 Best Merfolk In Commander

If you’re the kind of player that likes making water-based puns and jokes about things being a little fishy, then you’ll likely be interested in knowing about the best Merfolk in Commander.

Sure, there are other moist tribes out there, but Merfolk are pretty consistently hard to deal with and incredibly powerful, and what more can you really ask for from a bunch of Creatures that like chilling out on river beds and stuff.

The 10 best Merfolk in Commander

Our honorable mention this time goes to Svyelun of Sea and Sky, who is a new card from Modern Horizons 2. They’re a Merfolk God, which is pretty cool, and they’re also only three mana for a Blue 3/4 that lets you draw a card whenever they attack.

They’re also indestructible as long as you control at least two other Merfolk, and they give all of your other Merfolk ward 1, which means spells that target them automatically get countered unless the person casting it pays an extra mana. It’s pretty cool, and we like it a lot, but all of the best Merfolk in Commander do a lot of good work.

We’re kicking off with Merrow Reejery, which is a fun card to say, and also a three mana Blue 2/2 that gives all of your other Merfolk +1/+1.

On top of that, whenever you cast a Merfolk spell, you can tap or untap a target permanent. Because this can hit Lands as well, you can very easily have turns where you basically cast your entire hand by untapping the correct Land. It also means you can get rid of potential blockers, and just generally exert a lot of control over the battlefield.

There are two versions of Sygg in MTG, but this one is Sygg, River Guide, and they’re the lawful version of the card. For two mana, Sygg is a White and Blue 2/2 with islandwalk.

You can also pay two mana to give a Merfolk you control protection from a color of your choice until the end of turn. That’s great for getting in a sneaky attack, keeping something alive, or just flexing because you have more mana than you need.

View at TCG Player
Surgespanner is a four mana Blue 2/2. It doesn’t have any special combat abilities, but it’s still an incredibly useful card.

Whenever Surgespanner becomes tapped, you can pay two mana, and if you do, you get to return a target permanent to its owner’s hand. That means you mana starve people, bounce their expensive permanents, or get a second-round of your best ETB effects.

Even with the 1/1 stat line, Stonybrook Banneret is two mana which discounts any Merfolk or Wizard spells you want to play. Plus, the Merfolk Wizard comes with Islandwalk that makes her unblockable against opponents who control an Island, and Blue is common in Commander.

Often you see Stonybrook Banneret in dedicated Merfolk Commander decks as it allows you to unload your hand of Merfolk to take over the game. Even if she’s removed from play, getting a couple of creatures out with the discount is enough.

View at TCG Player
Kopala, Warden of Waves is a three mana Blue 2/2 that grants all your Merfolk a lot of protection. It’s not the kind of thing that wins a game, but it can help you avoid losing it.

Basically, they make it so that both spells and abilities that your opponents control cost an extra two mana to cast or activate if they target a Merfolk you control. It’s not going to save everything you have every time, but it’ll make people more reluctant to mess with you.

View at TCG Player
Lullmage Mentor is a three mana 2/2 that gives you a 1/1 Merfolk token whenever a spell or ability you control counters a spell, which is cool, because you’re playing Blue, which probably means you have counterspells.

They also allow you to tap seven untapped Merfolk you control to Counter a target spell. It’s pretty easy to have seven Merfolk in a dedicated deck, so this fish-friend is going to do a lot of great work for you.

4 – Master of the Pearl Trident

View at TCG Player
Master of the Pearl Trident is a two-mana Blue 2/2 that gives all of your Merfolk Creatures +1/+1 and islandwalk.

Both of those abilities would be great on a Creature that costs four mana, maybe even more, but on a two mana Creature, it’s the kind of combination that dreams are made of.

You could probably argue that Thrasios, Triton Hero should be at the top of the best Merfolk in Commander list, and you wouldn’t be wrong really. They tend to play a supporting role though, so they’re number three here as a result. For two mana, Thrasios is a Green and Blue 1/3 with partner.

Their ability allows you to pay four mana to, “Scry 1, then reveal the top card of your library. If it’s a land card, put it onto the battlefield tapped. Otherwise, draw a card.” It’s useful, for sure, but is often great because of the other cards in the deck, and not just Thrasios themself.

View at TCG Player
Thassa’s Oracle is a card so good it’s been banned in Historic. For two mana, you get a 1/3 Merfolk with a very potent ETB trigger.

“When Thassa’s Oracle enters the battlefield, look at the top X cards of your library, where X is your devotion to blue. Put up to one of them on top of your library and the rest on the bottom of your library in a random order. If X is greater than or equal to the number of cards in your library, you win the game.” Basically, you either get a great draw the next turn, or if you’re committed, you just straight-up win the game on the spot.

There are a lot of good choices for a commander if you’re playing Merfolk, but our favorite is Kumena, Tyrant of Orazca. Kumena is a three-mana Green and Blue 2/4 with three abilities.