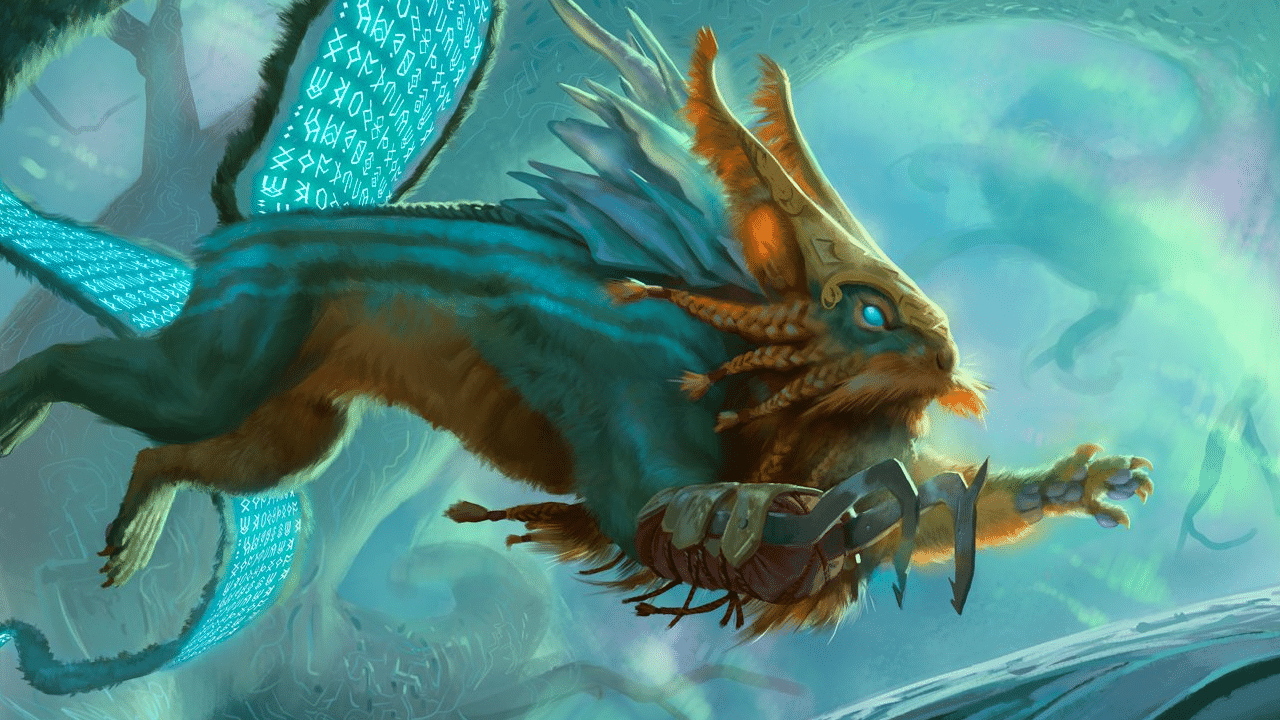 Although it came out earlier in the year, Kaldheim is shaping up to be a set full of powerful cards for Standard, Commander, and Modern. Kaldheim is inspired by Norse mythology and Vikings, so expect to see Gods, Squirrels, and mythical monsters fight it out for survival.

Released in February, Kaldheim is seeing a huge impact in Standard since rotation occurred with Innistrad: Midnight Hunt‘s release. Thanks to cards from Throne of Eldraine and Theros Beyond Death, Kaldheim cards were kept to the sidelines until recently, where Standard is dominated with cards that are now creeping up in value. Before rotation, Kaldheim was a low-value set but this is now changing with the Standard metagame settling into a new groove.

When Kaldheim first dropped, there was plenty of excitement around Birgi, God of Storytelling as it offers plenty of Combo potential. It’s seen some play in Standard, but it’s Modern and Commander that has created a demand for the powerful God. Not only does it have potential, it becomes more viable the more powerful Red spells come into print, so it’s one to keep an eye out for when future sets drop.

Not to mention, the Legendary God makes for an excellent Mono-Red Commander. Often you see Birgi at the helm of a Mono-Red Storm or ‘spells matter’ Commander since you generate mana each time you cast a spell. Given that some of the best Storm pay-offs are in Red, it’s easy to chain off a wealth of cheap spells to Grapeshot for the win. Or, you can swarm the board with Goblins thanks to Empty the Warrens, or you can go classic and Lightning Bolt everyone instead. Also, Harnfel, Horn of Bounty has its uses in Commander. Sometimes you have too many lands in hand and want interaction from your library instead.

Read More: Mono-Red Is Back on the Menu in Innistrad: Midnight Hunt Standard

Kaldheim continued a cycle that began back in Zendikar Rising. The Pathway cycle is some of the best lands to come into MTG for some time since it offers choice while still coming in untapped. Out of this cycle, Darkbore Pathway is the most valuable due to its application in Standard. Often you see the land featured in Sultai Midrange or Control strategies, and in Black/Green lists in Commander.

As such, the Pathway Cycle is an excellent option to use in Modern and Pioneer if you can’t afford Shock Lands. While you only get to use one side of the card when they’re in play, they offer mana fixing and support around the cards in your hand. Either way, these lands are always a great pick up and will see play outside of Standard once Zendikar Rising rotates.

Read More: How Many Lands Should A Commander Deck Have?

Since it’s printing, Toski, Bearer of Secrets is seeing play in dedicated Mono-Green Aggro builds in Standard as it’s a threat that ignores any countermagic. You do have to attack with the Legendary Squirrel every turn, but the Indestructible clause offsets this issue. As it’s only 1/1, it becomes better the more +1/+1 Counters, Equipment or Enchantment Auras you attach which is something Green isn’t short of offering.

Toski is going far as Modern, where the Legendary Squirrel sees play in Stoneforge Mystic builds as Toski can equipment such as Sword of Fire and Ice well. Thanks to its uncounterable and indestructible ability, Toski is a hard card to remove if you have a board of creatures to protect from any sacrifice effects. Going further, Toski is a Squirrel so it fits right at in with Chatterfang, Squirrel General as you can draw a card for each Squirrel that deals combat damage to a player. All in all, Toski is a powerful threat if you are able to support it with other cards, or you can use it to enable some card draw.

Esika, God of the Tree / The Prismatic Bridge

In most recent Standard sets, we often see a five-color Legendary creature for Brawl or Commander usage and Esika, God of the Tree is the offering from Kaldheim.

You don’t see Esika in Standard as it cares about running a bunch of Legendaries which is better served in broader formats such as Commander. If you come across an Esika player in a Commander pod, expected it to be brimmed with Gods from Kaldheim, Theros Beyond Death and the original Theros block. As such, you can treat your Legendaries as ramp to cast bigger threats later in the game but thanks to Esika’s vigilance ability, these can also get into combat if required. Unique and fun build around Commanders such as Esika often command a decent value and expect that to rise the more Legendaries enter MTG in future sets.

Halvar, God of Battle / Sword of the Realms

You often see Halvar, God of Battle featured in Standard Mono-White Aggro lists mostly for the flip side. Sword of the Realms provides protection for your threats, which you can recast once they die and are equipped with the sword.

Also, the Mono-White God makes for a strong Commander especially if you want an Aura or Equipment subtheme. It can be a little slow due to needing Equipment and Auras already in play for Halvar’s triggered ability to work, but it’s worth it since it triggers on every combat. As such, you can move Equipment or Auras on your combat for attacking, then when it comes to your opponent’s combat, you can shift these around again for blocking. Like with the other Kaldheim Gods, what makes these so powerful is the ability of choice that is always available to you.

Another powerful Mythic from Kaldheim is Koma, Cosmos Serpent. Sometimes you see the Legendary Serpent feature in Standard Simic-style ramp decks as an uncounterable win condition. Not only can it come into play free of countermagic, but you also create a Serpent token on each upkeep which offers a few options if you choose to sacrifice one of these tokens. Koma offers something different compared to other Simic Legendaries as it cares about interacting in combat, rather than unloading your hand with lands to draw more cards.

As such, Koma is an interesting Commander for Simic as it offers a token and tribal strategy all rolled into one. As you are in Green, you have a myriad of ways to ramp into the Legendary Serpent, with plenty of token doublers to go wide thanks to Parallel Lives and Doubling Season. Not only is Koma increasing in value as it’s a different take on Simic, but the Koma’s Coil tokens are also becoming quite hard to find since they’re only created by this Mythic card. With that, the tokens are becoming expensive since you want more than one token available given the strategy you want to take with the card.

Read More: You Should Be Playing This Powerful Planeswalker In Standard

Once a nuisance in Modern thanks to the Cascade mechanic, Valki, God of Lies remains a valuable card thanks to Standard and Commander usage. For two mana, you get to take a creature from each opponent’s hand and choose to cast that card for as long as Valki remains on the battlefield. And if you don’t fancy playing Valki, you can play a seven mana Planeswalker Tibalt, to take more permanents from your opponents.

Given that it’s a card that can flip into a Planeswalker, these kinds of cards often maintain their value as they are so versatile. You also see Valki in Standard, often creeping in Jund and Orzhov Midrange strategies since you get value on Valki’s enter the battlefield ability. Expect to see the Mythic God appear in Standard for as long as it remains legal, with some attention in Pioneer.

It may not be a surprise to see Alrund’s Epiphany on the list given its notable impact in Standard, but the Sorcery offers application in Commander too. Thanks to Foretell, you can spread the mana costs of the Sorcery across two turns if you have no other spells to cast. Extra turn effects are welcome in Commander, especially if you are running Narset, Enlightened Master at the helm since you can cast it for free.

What makes Alrund’s Ephiphany such a powerhouse in Standard is due to Galvanic Iteration from Innistrad Midnight Hunt. The Instant allows you to copy your next Instant or Sorcery which in this case is the Ephiphany, then on your next turn, you cast Galvanic Iteration with Flashback targeting the Epiphany to take another turn. As such, it’s easy to monopolise a game of MTG as you’d want to run a playset of each in Standard to gain the most from this powerful combination. Izzet Control is currently dominating Standard which is influencing the price of this card further.

Making waves in Standard and Commander, Vorinclex, Monstrous Raider is a powerful threat that bolsters your +1/+1 counters strategy and removes any synergy from your opponents. You usually see Vorinclex in Standard in Mono-Green Aggro lists as a top-end threat.

Not only do see your permanents grow if they have counters, but you also have a 6/6 Trample and Hasty threat so you are able to get into combat comfortably. If you’re looking to run Vorinclex in Commander, it pairs amazingly well with Doubling Season to grow those counters further. The Legendary Praetor works well with Planeswalkers, Sagas, and Creatures which are widely used in Commander, allowing you to get ahead on the board while your opponents struggle. As it’s a Legendary Praetor, it will remain at a high price given its unique effect and the history of Praetors in Commander.

Coming in at the most valuable Kaldheim card at present is Goldspan Dragon. Not only does the Dragon pair well with Dockside Extortionist in Commander, it’s also playing a huge role in Standard. Izzet Dragons are becoming a force to be reckoned with, using cards such as Galazeth Prismari and Alrund’s Epiphany to take all the turns and deal all the damage.

As it’s one of the chase Mythics from the set, the price of Goldspan Dragon won’t be dropping anytime soon. Also, it’s expected to remain a strong option for as long as it’s legal in Standard given the number emphasis on Treasure tokens, and offers decent stats to get into combat. Either way, you can’t go wrong with a playset of the Mythic Dragon for Standard with overlap for Pioneer and Commander.