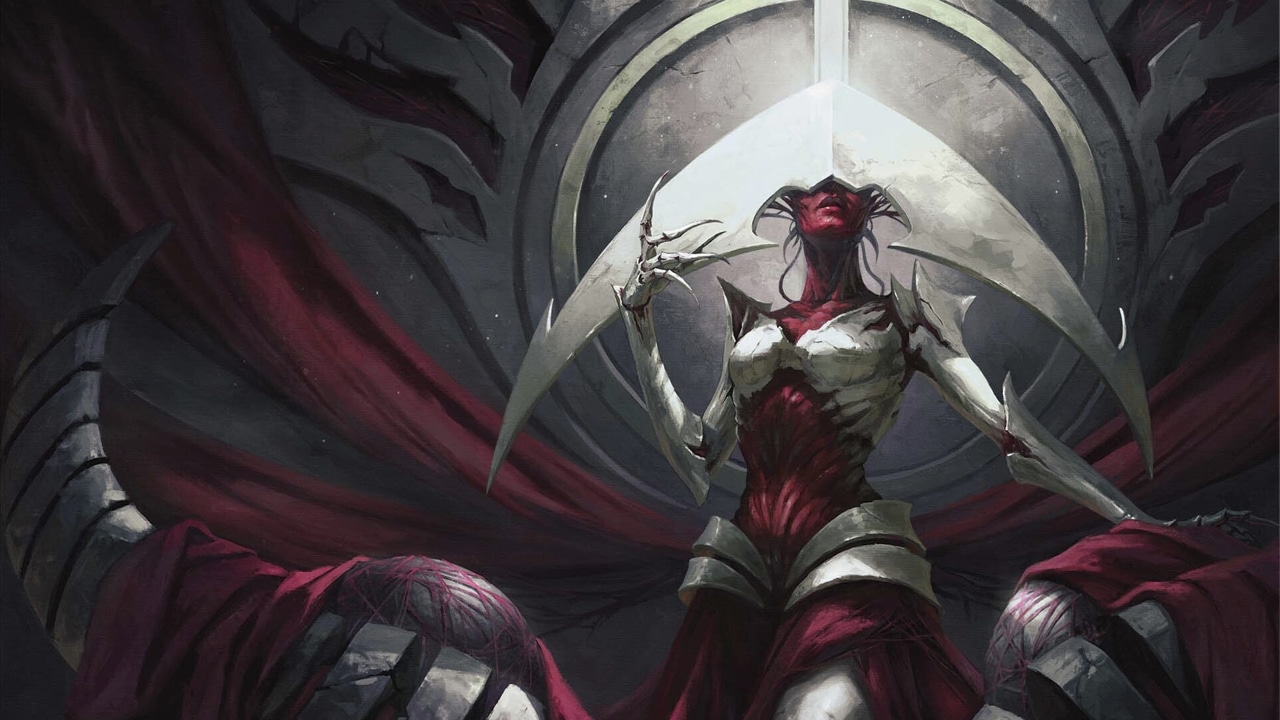 Phyrexians Dominate the MTG Multiverse in 2023!

Wizards of the Coast has been building up to their Wizards Presents event for quite a long time, and it didn’t disappoint! From a new incredible MTG crossover to the literal invasion of the entire MTG universe, there is a lot to break down! Sit back and grab a snack; as 2023 for MTG will be a doozy.

Elish Norn, the leader of New Phyrexia, has finally made her reappearance during August’s Wizards Presents! However, her ambitions are a bit bigger than any of us could have expected. Elish Norn has her gaze set on the entire MTG Multiverse! While we do not know how she will begin to attain her goals, we know that her goals are realistic. MTG’s 2023 sets will feature the story of the Phyrexians having the multiverse in their grasp while the other residents fight back to save it! The artwork featured in Phyrexia All Will Be One’s Set Boosters is pictured above.

This also means that we now know some set details for what’s coming in 2023, and it will not disappoint. A majority of 2023’s sets will be telling the story of the Phyrexian’s invasion, but we will also be returning to some fan-favorite planes near the end of the year.

This summary of the 2022-2023 season is showcased above! Phyrexia’s story will be told for the first four upcoming sets in Dominaria United. Once we explore some of the aftermaths of a war that spans everything, we will visit specific portions of Eldraine and Ixalan. These couldn’t be farther away from the other set’s themes. Don’t worry; we got a bit more detail for everything here.

While we already have some confirmed details about the Brother’s War, this should serve as an excellent reminder of anything you already know while filling you in on any new information. This set will showcase the legendary MTG event that has happened in the past. That means that The Brother’s War’s events have already occurred in the past and are not chronological to the sets before and after it (Dominaria United and Phyrexia, All Will be One). Dominaria United aims to take a “closer look at what caused the rift between Dominaria and the Phyrexians,” according to Wizards of the Coast’s Senior Communications Manager Liz Stewart.

Urza and Mishra were famous for their artificial prowess. The Brother’s War, as a result, will “include plenty of artifacts.” According to Liz Stewart, MTG players should expect some “giant mechs and colossal war machines” to grace their draft tables, and eventually, their Commander decks. Additionally, the events of The Brother’s War will “kind of explain where the Planeswalkers came from.”

We’ll get a taste of the origin for some of the most primal yet significant parts of the MTG lore as it will explain “this whole backstory for why we have the five colors.” This refers to the color pie that encompasses a significant identity comprising MTG. This is unprecedented and may serve to answer some of the community’s most profound questions while possibly creating even more. All this and more is coming on November 18, so look forward to it!

MTG Phyrexia All Will Be One

In Phyrexia All Will Be One, “we will be visiting the terrifying plane of New Phyrexia,” according to Liz Stewart. This is also where we learn that Elish Norn is trying to “conquer the Multiverse.” Stewart goes on to say that “this set will be pretty dark. Horror fans will not be disappointed with this one.”

MTG March of the Machines

Currently, we do not know very much about March of the Machines or the aftermath set coming afterward. Still, we know it will be the “dramatic conclusion of the whole arch between the Dominarians and the Phyrexians.” This picture helps to highlight the stakes of what will be “the entire multiverse rallying together to have this one final epic battle.”

March of Machines Aftermath will be an “epilogue that ties up some loose ends.” Most importantly, the Aftermath will show us “how the multiverse of Magic has fundamentally changed.” These sets will be coming out in Spring 2023.

After resolving this epic battle between the Phyrexians and the entire multiverse, we’ll be taking some time to revisit some old planes! Eldraine is a fairy-tale-inspired set that was introduced to the world of MTG in late 2019. This set was famous in the MTG community, introducing multiple powerful cards banned in various formats. No one will forget the reign of terror that Oko, Thief of Crowns caused. Once Upon a Time was also incredible for keeping decks consistent at absolutely zero cost.

According to Liz, as the title suggests, the Wilds of Eldraine will “be going into the wilds of Eldraine.” As a quick refresher, a significant theme in the Throne of Eldraine explored the duality of the Five Knightly Courts and the mysterious creatures of The Wilds. Since we spent most of Throne of Eldraine’s lore following Planeswalker twins Rowan and Kenrith around, it makes sense that we are now exploring The Wilds, which was given much less detail than the courts were. Eldraine has a unique flavor amongst MTG sets and is, as a result, very memorable for many MTG players.

MTG The Lost Caverns of Ixalan

In a theme that is “farther away from the Phyrexians as can possibly be,” according to Stewart, 2023’s final core MTG installment will have its players “spelunking for buried treasure.” In addition to this quirky twist, an allusion to Dinosaurs, one of Ixalan’s past calling cards, may also be featured in this set. We really do not know much about this set otherwise, but Dinosaur fans in my playgroup will be praising this one to the heavens regardless.

Think this is everything August’s Wizards Presents had to offer? You would be surprised! In addition to 2023’s MTG core set breakdown, Wizards Presents also featured some incredible Universes Beyond spoilers! Not only do we have more information on Warhammer’s crossover coming out in October, but Lord of the Rings has some new information too! If that weren’t enough, a new incredible crossover is coming to MTG that will blow your mind! 2023 looks like a fantastic year for Wizards of the Coast!