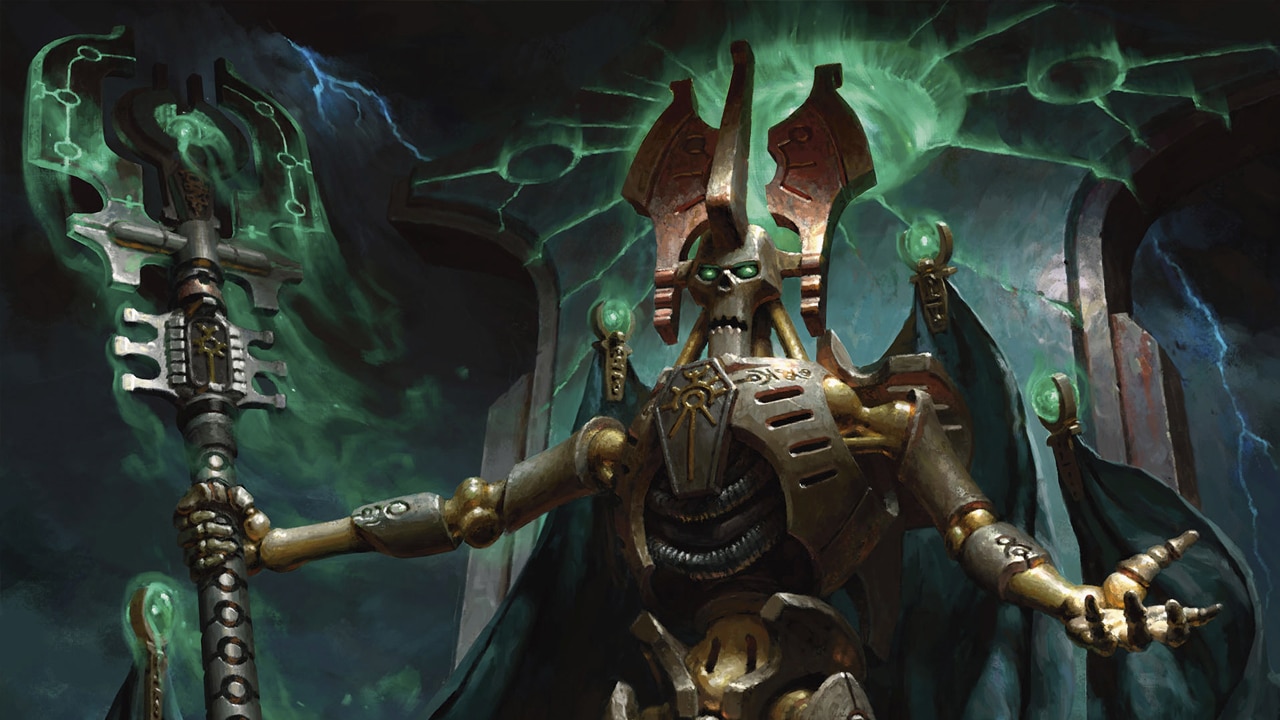 Whether you love or hate it, Warhammer 40,000’s Universes Beyond crossover is Magic’s most significant to date. Launching in October, players can look forward to four Commander decks, each with its unique flavor. Whether you’re a Commander fan or a Warhammer veteran, there’s plenty to be excited about. This is especially true since these Commander decks are full of flavor!

For better or worse, Wizards of the Coast didn’t reveal all too many details during Wizards Presents 2022. This is despite the release of the Warhammer 40,000 Commander decks being under two months away. Rather than revealing every last detail, Wizards continues teasing us with more tantalizing lore and artwork. Thankfully, despite Wizards Presents having just ended, we shouldn’t have to wait long to learn more about these decks.

As an entirely black Commander deck, Necron Dynasties celebrates Warhammer 40,000’s Necron faction. If you haven’t heard of them before, Necrons are a race of robotic humanoids whose technologies are unmated in the Warhammer universe. After being awoken from stasis tombs after a 60-million-year nap, the Necrons are now here to wreak havoc. In a press briefing, we were told that Necrons “overrun their opponents with an unending horde of soulless living metal.” Aside from sounding totally metal themselves, this likely means the Necron Dynasties deck will have a big focus on artifacts. Who knows, if we’re lucky, we could even see a fitting Phyrexian mechanic or two.

Forces of the Imperium

As the biggest of Warhammer 40k’s factions, The Forces of the Imperium are certainly a force to be reckoned with. With a color identity of white, blue, and black, it should be no surprise that their doctrine has them “trying to control the tide of the battle and overwhelm their enemies with their emperors will.” Unfortunately, not much else is currently known about the Forces of the Imperium. However, they nevertheless look amazing. With a gothic steampunk style, it’s also a look that hasn’t been featured in MTG much before.

The Tyranids are the ultimate predators in the Warhammer 40,000 universe. Feeding upon everything they touch, the Tyranids are a spectacularly powerful force that only gets bigger and badder. With blue, red, and green color identity, the Tyranid Swarm should ramp up toward progressively more game-ending threats. Aside from being serious bad news, not much is known about the insectoid Tyranid Swarm, so we’ll have to wait to see more in the future.

Last but by no means least, we have the forces of Chaos and The Ruinous Powers deck. As their name suggests, the Chaos faction is “champions of unpredictable energies” and the greatest foe of the Imperium. As one of two decks with red in its color identity, we imagine that The Ruinous Powers deck may be slightly more aggressive than the other Warhammer 40,000 Commander decks. The Ruinous Powers is the only deck to have its Commander, Abaddon the Despoiler, spoiled. Featuring the ability to give spells Cascade, so long as your opponents have lost enough life, Abaddon the Despoiler seems incredibly powerful.

A Quartet of Commander Staples

As if interesting art and factions weren’t enough to get you interested in the Warhammer 40,000 Commander decks, there will also be plenty of Commander staples. While exciting, we’re not talking about the promotional card Fabricate here; oh no, we have another prize; Sol Ring. Sol Ring may not be the most expensive of Magic’s powerful Commander cards, but it is one of the most iconic. With the ability to produce two colorless mana while only costing one to play, Sol Ring is undoubtedly a Commander favorite.

Thankfully for Commander and Sol Ring enjoyers, the Warhammer 40,000 Commander Decks don’t just feature one boring ol’ Sol Ring. Instead, each deck has its colorful version of the iconic card. Unfortunately for those looking for some mechanical variety, each of these cards is still a Sol Ring, but they do at least feature some lovely artwork.

So far, Wizards of the Coast has yet to announce the full decklists for each of the Warhammer 40,000 Commander decks. As a result, there’s no telling what other Commander staples might be lurking behind the occluded packaging. For now, unfortunately, we’ll just have to wait until nearer to October 7th to find out more.