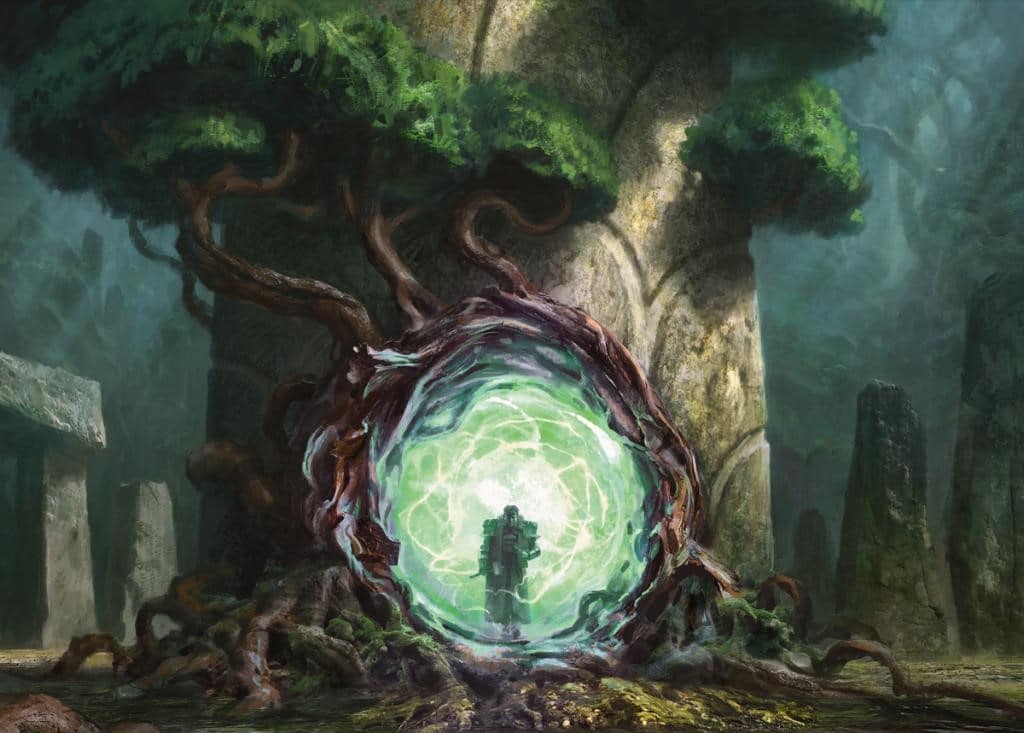 A relatively ubiquitous response from the MTG community has been heard regarding the latest Warhammer Commander deck spoilers: these are way better than anyone anticipated. The original set of featured Commanders looked weak to most consumers but has since been saved by a stellar line-up of secondary Commanders. While Hardened Scales was an obvious enchantment that slots in perfectly with this deck’s theme, there are some other obvious home runs that every MTG player will consider powerful upgrades for the deck. Here, we’ll brush over what’s going on with the Tyranid Swarm and cover those upgrades in detail.

Judging from yesterday’s spoilers, the overall strategy for the Tyranid Swarm seems pretty straightforward: ramp into giant creatures with +1/+1 counters mattering. The reprints featured in this deck are a pretty easy way to tell, with Hardened Scales and multiple classic Commander ramp spells like Farseek, Cultivate, and Rampant Growth being featured. Due to the new mechanic named Ravenous being introduced, it also becomes evident that X spells will also matter a lot in this deck. This means that many cards that are pretty powerful in Hydra builds will also be fantastic here. That being said, before we get into the upgrades themselves, some MTG players are concerned about breaking up the theme of the deck.

The Ozolith and Breaking Thematic Consistency

The period of time associated with the “will this card be reprinted in this deck” subgame is now over, and players have a firm grasp of powerful upgrade cards that can help to improve the Tyranid Swarm’s basic decklist. A Reddit post emerged very quickly, exclaiming that The Ozolith, one of the best-known +1/+1 counter support cards that is not being reprinted, will surge in price. This post received a lot of ‘water is wet’ responses like many would expect, but it also brought up an interesting point that MTG players haven’t had to consider too profoundly before this product: the theming of the deck.

Much of the art featured in the Warhammer decks is much darker than traditional MTG art. This creates a much deeper feeling of a theme because of how distanced this artwork is from classic MTG art. This feeling of theme is further deepened in Collector’s editions of the deck, where all of your cards will be foiled with a special Surge Foil treatment. This can, understandably, make any card that does not share this treatment stick out like a sore thumb on your board. Finally, the security stamp on these Warhammer cards are unique and not replicated by core set MTG cards. This raises an interesting question for those considering buying the Collector’s Edition of the Warhammer Commander decks: are you considering an upgrade? If you are, you may be better off purchasing the standard version of the deck simply for visual consistency.

Back to The Ozolith itself, anyone who takes a read will quickly see why many players anticipate a vast price spike to this card. The Ozolith ensures that your resources invested into each creature will not go to waste upon their destruction. The Ozolith will retain any counters on that creature and redistribute them to different creatures.

In terms of price spikes, The Ozolith has seen a slight one since the spoiling of this deck. With the exception of cards in non-English text, this card has been consistently selling for between $16 and $25, but the lower end of that spectrum is slowly increasing. That said, the other cards on this list suggest very heavy price spikes are coming.

This particular upgrade was one that we recommended quickly after seeing some of the initial spoilers to the Tyranid Swarm. This Modern Horizons Mythic was a pretty obvious upgrade to a lot of the community, quickly appearing on many players’ radars. This card makes consistently getting Ravenous triggers a lot easier. Instead of always making X equal five, you can use this card to pay only three mana into X while getting the Ravenous triggers off Unbound Flourishing’s doubling ability. There aren’t a lot of X-cost Instant and Sorceries available in this deck, but the first ability is much better than some of the weaker cards in the original list for this deck.

Unlike The Ozolith, this card is already seeing aggressive price spikes less than 24 hours after the spoiling of the Tyranid deck. Today alone, this card has jumped from an average sale of $5.80 to $8!

Vorel of the Hull Clade

One of the classic +1/+1 counter Commanders, Vorel brings with it the threat of scaling any board of creatures to something a bit inhumane. Unlike the other upgrades on this list, Vorel is very cost-efficient, priced at less than a dollar. Notably, Vorel will also double counters on The Ozolith, which can accumulate counters at crazy speeds.

Perhaps the most theme-conflicting card on this list, Minsc & Boo has recently seen no end of price spikes. While this is due to its reign in Legacy, it is also quite impressive in a counters-themed deck. The ability to scale Boo while translating those counters onto The Ozolith and other cards like it will heavily impact the board.

If you’re thinking of picking up Minsc & Boo, you may want to consider doing it as quickly as possible. This card’s performance in Legacy is only becoming more dominant as the day goes by. Look no further than the MTGO price for this card, which has risen to a ridiculous $63! Unfortunately, Tyranid Swarm spoilers also seem to be affecting the paper version of this card, with prices beginning to push towards $40. This heavily eclipses sale prices from yesterday, only going for about $25 at the absolute highest.

Herald of Secret Streams looks like one of the cards that best interact with the current gameplan of the Tyranid Swarm EDH deck. Recent price spikes agree with this, with the Herald seeing a 100% increase at the beginning of September. These spikes are only continuing, with the current price of the Herald hovering around the $3 to $5 range.

Perhaps one of the best Green Commander cards in the entire game, The Great Henge’s game plan is exactly what this deck is looking for! The Great Henge rewards its owner for casting a bunch of giant stompy creatures, reducing its casting cost in the process. The Great Henge will additionally grant life gain for sustainability, additional mana to cast bigger creatures, extra +1/+1 counters on entry, and card draw! If not for the insane price tag, every Tyranid hopeful may be clamoring for a copy of this. Unlike other cards on this list, The Great Henge has not seen a considerable price increase in response to Tyranid spoilers, but its price tag already exceeds $50 on average.

The Tyranid deck also has a bit of a tribal theme going on. Kindred Discovery is one of the best tribal cards out there and was recently reprinted in Baldur’s Gate, allowing you to purchase this card for an absolute steal! Be careful, though. This card is already beginning to see some slight price increases but remains around $5 for the time being.

Our last upgrade recommendation is a very affordable card that is also seeing a bit of a price increase today. This card is still only worth about a dollar, and its function will go much further than that. This Arena Cube favorite will also help to turn your creatures into card draw while fixing your draw in dire situations.

What Should I take Out?

A few cards in the deck don’t totally mesh with the rest of the deck’s game plan but are incredible additions to Commander’s growing card base. Ghyrson Starn is the biggest example of this, instead pandering to support the famous ‘pinger’ archetype. This does not help the ramp or counter theme in any way and can therefore be removed from the deck.

Goliath Truck does support the overall synergies in the preconstructed deck but does so in a not-so-powerful way. All of the recommended cards will be a stronger fit in this deck.

Genestealer Locus is a more vanilla Commander card that, while helpful, does not really support the themes of this deck. These upgrades are a better alternative.

Venomthrope is a really cool card that a lot of players would like to see reprinted into Standard. That said, this card is a bit vanilla compared to the deck’s game plan and can be upgraded as a result.

Gargoyle Flock is a lot more potent than the other cards on this list and allows the deck to attack from a bit of a different angle. This will synergize exceptionally well with Kindred Discovery. That said, depending on what angle you want your final version of this deck to be, this could be one of the last cuts you make.

What Will You Create?

This Tyranid deck looks pretty powerful right out of the box. Between some powerful synergies and some effects that MTG players have wanted for decades, it’s safe to say that this spoiler has restored the community’s faith in these Warhammer products. Regardless of what you do with this deck, should you consider buying the upgrades recommended, it may not be a good idea to wait too long.