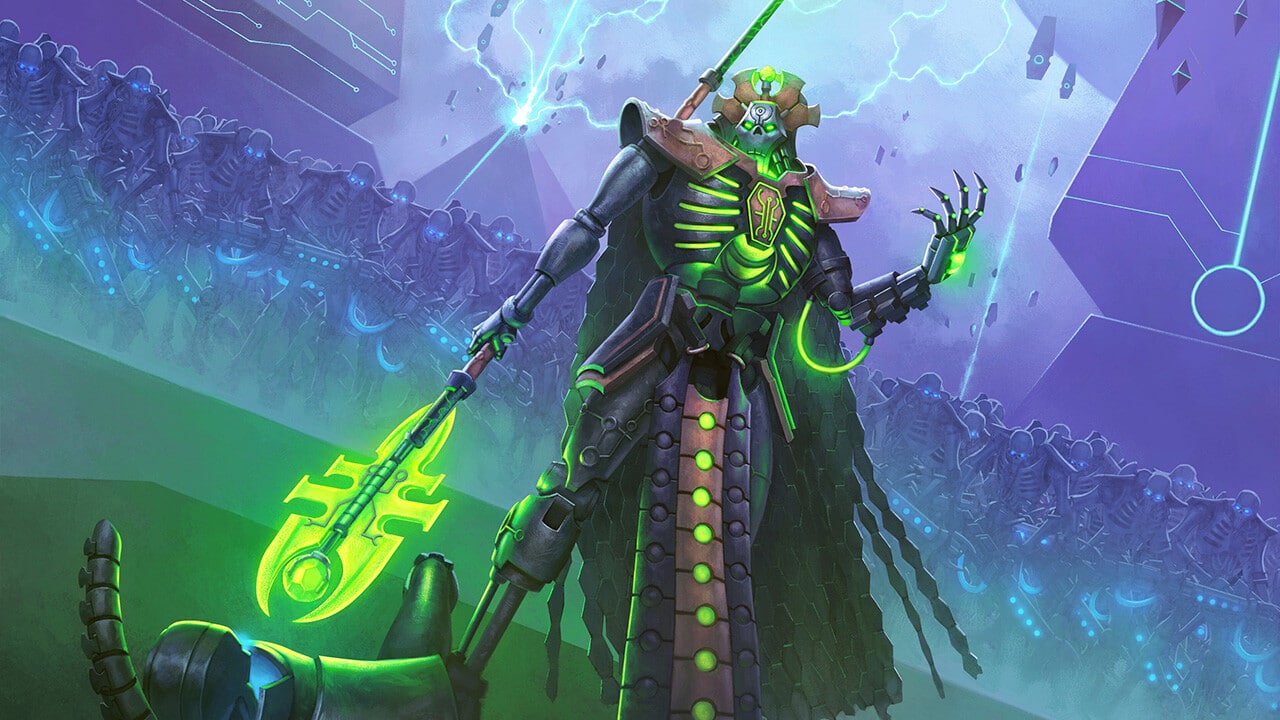 As Magic: the Gathering’s first central Universes Beyond product, there’s plenty of anticipation for the Warhammer 40,000 Commander decks. Following the decks’ spoiler season, even once skeptical diehard MTG players were won over by the compelling cards on offer. With powerful new potential commanders, infinite combos galore, and some of the best theming in an MTG product, the Warhammer 40,000 Commander decks offer much to be excited about.

The Worst Kind of Pringle

The official release date for the Warhammer 40,000 Commander decks is still a few weeks away. Once again, however, players have gotten their hands on MTG’s latest prized products early. To show off their early haul, unboxings of these products have already been posted to YouTube. This has given MTG players an early look at the gorgeous Surge Foils and their worryingly pringled shape.

In early videos by both Geek Culture Gaming and Askrias, this issue is, unfortunately, exceptionally easy to notice. With the entire deck noticeably curving when viewed in a side profile, there’s no denying the severity of this issue. The problematic pringling is even evident before the cards are fully unboxed and removed from their protective plastic packaging. As the bane of many Magic players, the pringling is undoubtedly disappointing to see from right out of the gate. All the more so since the Warhammer 40,000 Collector’s Edition Commander decks are so expensive, retailing at $200+ each.

To make matters worse, this issue appears to be somewhat widespread. Across all the currently posted videos we’ve seen, every MTG Warhammer 40,000 Collector’s Edition Commander deck has been unboxed pringled. As YouTuber OzMTG jests after opening every Collector’s Edition deck, “we can confirm you get 100 premium Pringles.” Thankfully, while things may look bad out of the box, these first impressions may be somewhat premature. In a somewhat unfortunately buried comment, Geek Culture Gaming stated that after “a few days in the deck boxes and the cards have flattened out actually. So it’s all good!” Similarly, YouTube user Umezete suggests that “just double sleeving usually straightens them out for me.”

Despite how curable the pringling problem may be, players on social media are still infuriated by these pre-pringled cards. After issues were brought to light on the MagicTCG Subreddit, many players claimed this pringling was the nail in the coffin for their prospective purchases. “You definitely saved me a bunch of money and heartbreak,” u/IAmOffMeta claimed after being warned by the Reddit post. Similarly, u/son-of-saturn stated, “Thank you for posting. Was seriously considering dropping the money..”

Alongside those thankful for this issue being brought to light, there were also players claiming that this is nothing new. “Quick, everyone act surprised,” u/FormerlyKay jested. Meanwhile, u/Revanaver91 claimed that “This curling issue has been a recurring problem in some products since the first ‘From the Vault’ product in 2009. If the issue has been going on for half of the game’s life, it’s pretty ubiquitous.” Thankfully, as u/Revanaver91 notes, “not every product has had bad foiling.” Despite this, it is nevertheless a frequently complained about topic.

Thankfully for MTG’s foil-loving players, it appears that this issue isn’t entirely a result of Wizards’ rampant experimentation with foils. Instead, much of the blame is put on a familiar foe, humidity. As u/Justinintendo notes, while Wizards “likely stores their cards in climate-controlled facilities” to mitigate this issue, however, they can’t guarantee every distributor or LGS does the same. Additionally, Wizards’ recent struggles with supply chain issues may also be to blame. With COVID-19 having caused delays to numerous products, it’s reasonable to expect that Wizards are being “forced to source different papers, inks, etc. just to continue printing cards.”

As we mentioned previously, thankfully, this pringling situation may not be as bad as it first appears. Firstly, while there are many videos showcasing the fault, it’s currently unclear exactly how widespread the pringling issue is. For better or worse, we won’t know the true extent of the problem until the product officially launches on October 7th. Until then, MTG players can take solace in the speculation that this pringling may not completely ruin the Warhammer 40,000 Commander decks. U/HeyApples states that they’ve “had great success flattening the few foils I’ve seen with this style of curling.” Subsequently, they expect that Surge Foils “will probably end up fine after they are out of the box and stored in the proper humidity conditions for a while.”

Read More: This MTG Product May Be Getting Axed, Unless You Save It