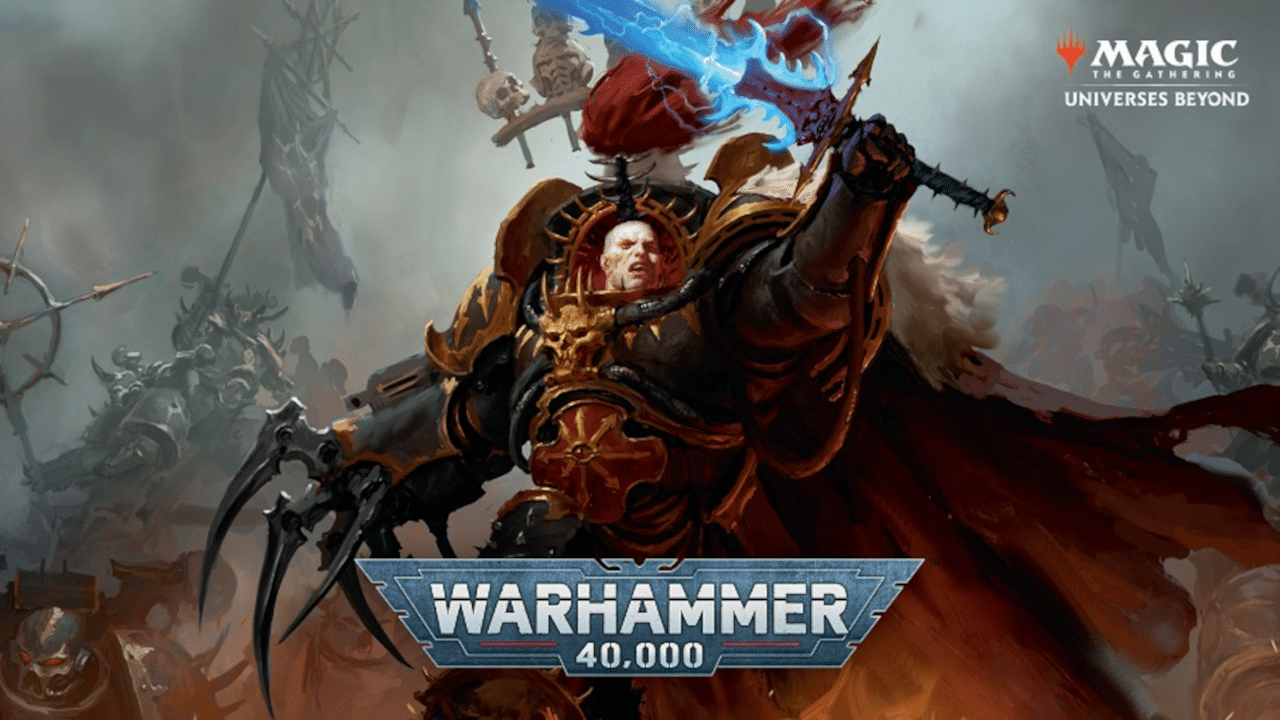 Following past collaborations with Street Fighter and Arcane, Wizards of the Coast is partnering with Games Workshop for a new batch of Universes Beyond products. Based on the Warhammer 40k Universe, this Commander-focused release will introduce several new cards only playable in Eternal formats. As the name suggests, these cards draw inspiration from the Warhammer 40,000 miniature wargame produced by Games Workshop.

First showcased during Magic Showcase 2021, Magic: the Gathering’s Warhammer 40k crossover has been a long time coming. To ensure you’re up to speed for its release this year, here’s everything you need to know!

What is MTG Warhammer 40k Universes Beyond?

MTG’s Warhammer 40k Commander Decks are a new crossover product released as part of the Magic: The Gathering Universes Beyond series. This series allows Wizards of the Coast to create unique cards using the worlds, characters, and stories of non-Magic IPs. As a non-cannon set, the MTG Warhammer 40k Universes Beyond cards feature a triangular holofoil stamp.

What are the MTG Warhammer 40k Commander Decks?

Four preconstructed Commander decks are being released in the Warhammer 40k Universes Beyond set. These decks will each feature 42 new cards themed around the Warhammer 40k universe. The preconstructed decks do not fit evenly into Magic: the Gathering’s color pie. However, each deck still has its own unique identity. Here are the names and colors of the Commander decks:

Alongside the quartet of preconstructed Commander sets, Wizards of the Coast is also releasing three Warhammer 40k-themed Secret Lair drops. Few details are known about these Secret Lair drops currently; however, their names are as follows:

The Warhammer 40k Universes Beyond set introduces a new creature type and mechanic to Magic: the Gathering. The creature type, Astartes, represents the Space Marines from Warhammer 40k. In Warhammer 40,000 lore, this race of genetically modified humans is known as the Adeptus Astartes, or “Those who conquer the stars.”

As well as the new creature type, the Warhammer 40k Universes Beyond set also introduces a new mechanic, Squad. As seen on Vanguard Suppresor, this mechanic allows a player to pay an extra casting cost any number of times to create that many token copies of the spell. Similar to Myriad and Double Team, this mechanic may require players to possess vast numbers of tokens and substitute cards.

Previously, the MTG Warhammer 40,000 Commander Decks were scheduled to launch on August 12th. Unfortunately, due to “ongoing supply chain challenges and delays in production,” this release was postponed by almost two months. The global release date for this product is now scheduled for the 7th of October 2022. This is also the release date for Magic: the Gathering’s wacky draft set Unfinity.

Wizards of the Coast has also confirmed that the release date for the trio of Secret Lair drops will also be impacted. No revised release date has been announced yet. However, more details are expected to be announced in the coming weeks. We’ll update this article when more information is known, so be sure to check back regularly.

While we are a long way away from spoiler season starting, Wizards of the Coast has still given us a taste of what to expect, thanks to some preliminary previews. In these previews, Wizards showcased Abaddon the Despoiler, the Commander of “The Ruinous Powers” deck. With the ability to give cards in your hand cascade during your turn, so long as your opponents have lost enough life, we expect Abaddon the Despoiler to be a serious force to be reckoned with. Other Commanders have also been spoiled for these Warhammer Commander decks, but some players are disappointed with them.