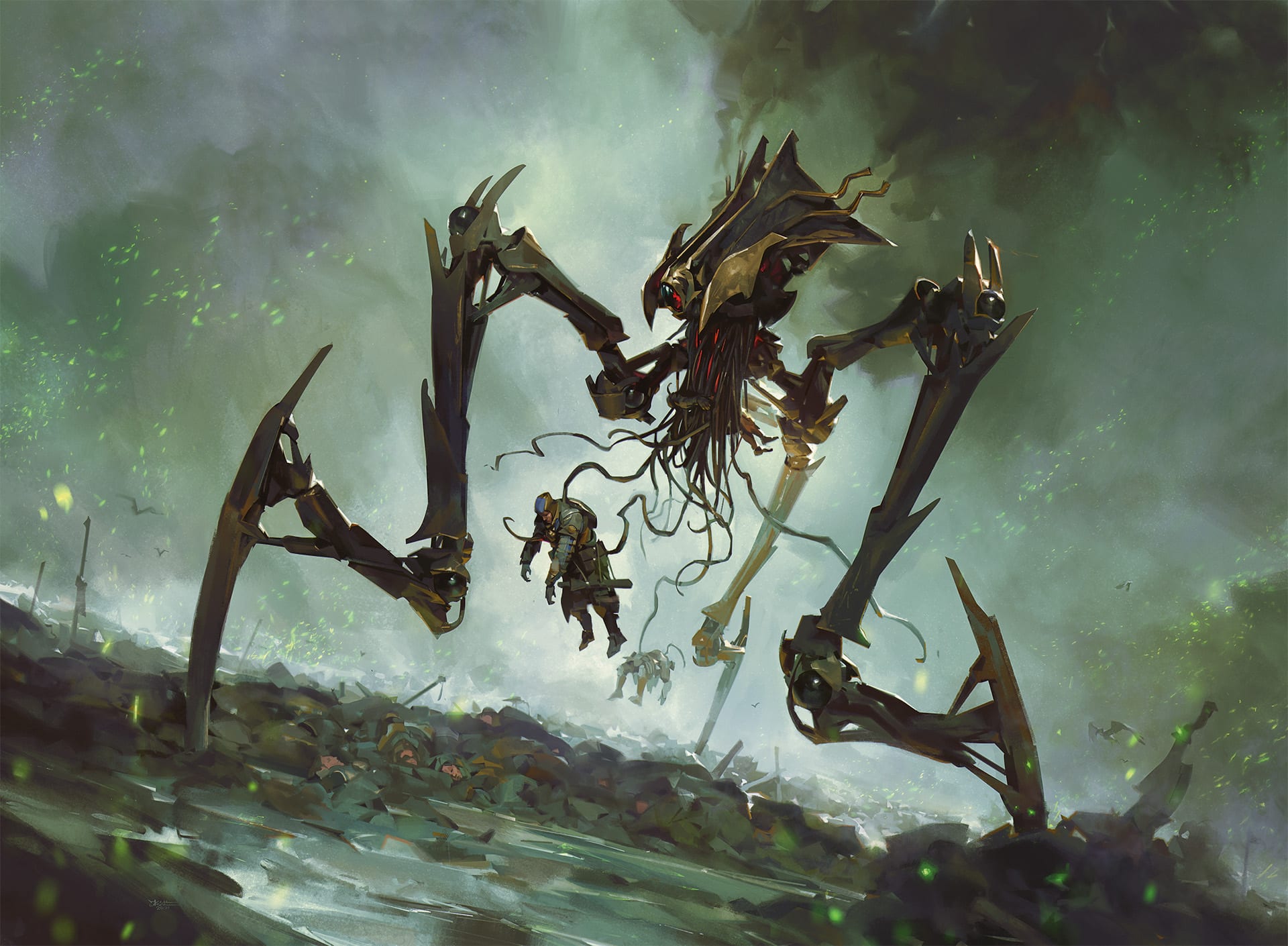 Players are slowly getting their hands on the first batch of Brothers’ War MTG serialized cards, and a disturbing pattern appears with early examples of these cards. A discussion already took over the community with their thoughts on how the cards look. This is a separate issue that looks towards the card quality of serialized MTG cards. It seems like misprints are going to be abundant with these cards. The real question here is how the community will react over time since these could arguably make the serialized cards even more valuable.

Numbered With a Printing Error

A few Reddit posts have been popping up over the past few days, highlighting first looks at serialized MTG cards appearing in the wild. The first among these was this Bone Saw pictured above. Spider-Man memes and complaints about the look of the serialization aside, this Bone Saw also has a minor misprint. If you look at the card’s flavor text, you’ll notice that it looks like another printing of faded flavor text on this card. This quickly prompted a variety of different opinions from Redditors following this card:

“If I pulled a card that is 1/1 and probably worth ten times more than the normal version (if not more than that), I would be elated.

He can probably sell this and buy a serialized playset of this card and another card.” – mikmars09

“Lol. Leave it to WOTC to be completely unable of even printing 500 copies of a super premium card without quality control, only for Magic players to be excited for it.

This comment from Daotar highlights the duality of responses seen when looking at similarly misprinted cards like this. This, as will be demonstrated, is a bit of an oversimplification of the misprint market, but most players fall somewhere on the range of reactions mentioned by this comment.

Example two is of a retro artifact that may be a bit more sought-after than others. Unlike Bone Saw, Mystic Forge has quite a powerful ability. This card lets you cast artifacts and colorless spells from the top of your library. As demonstrated by its effectiveness in colorless Historic Ramp and its applications in Vintage, it can be incredibly powerful.

Like the Bone Saw, this serialized Mystic Forge has a few misprints. These are a lot more minor than the Bone Saw misprints, so it’s normal not to see them upon first look. Beside the Artifact subtype, this Mystic Forge has a bit of a white spot. That is, according to the Redditor who posted this image, a misprint. There also seems to be some fading on the Trademark text at the bottom of the card that other Redditors have identified as a potential misprint.

Unlike the Bone Saw misprint, some Redditors are questioning the validity of this one:

“I’m sure it was there when you pulled it but, it looks more like damage to me. The printing of Wotc looks off in your picture but, it may be the angle.” – pbaddict

In response to these claims, xwishfulx, the owner of this card, stated that they have two other serialized cards with similar defects. No pictures have been added to back this claim.

When asked further about the condition of Brothers’ War serialized cards, xwishfulx had some rather shocking details to add, stating that “every single one ive seen has a small indent on the top right that you cant really see in this picture, ive seen 6 of them irl now and none are near mint.” Its hard to validify these claims, but it does open up the possibility that finding a Near Mint serialized card is going to be very difficult.

Will These MTG Serialized Cards Sell for Extra?

The most significant divide amongst reactions from the MTG community resides in whether these misprints make the cards more exciting or not financially. The potential for financial windfall gives these misprinted cards a second chance to show their value as a collectible. Some MTG players find this idea ridiculous, claiming that misprinted products are essentially damaged ones:

The biggest issue when discussing whether these misprints will be valuable is the misinterpretation from some of the MTG community that every misprint is valuable. One Redditor identifying himself as a misprint aficionado does an excellent job highlighting the differences between valuable and invaluable misprints:

“Misprint collector here. This is cool, but most of us didn’t care about the viscera seer. Errors like this became a lot more affordable when jumpstart happened (I have a few different triple printed playsets of cards that were $10 that look way more messed up than this). Biggest issue I see is that it’s a bone saw. Us collectors are trying to build all misprint decks and that card sucks and isn’t playable lol. Remember everyone: JUST BECAUSE ITS MISPRINTED DOESNT CHANGE BULK FROM STAYIN BULK.” Opposite-Occasion881

Truthfully, this opinion probably doesn’t speak for the entirety of the misprint community, but it should speak for a more significant portion of them than most MTG players may expect. According to our Redditor, the most common reason why players collect misprints is to “assemble fully misprinted EDH decks.” Playability may be a huge factor, therefore, when selling your misprints. Don’t get me wrong; there is a buyer out there for how unique this Bone Saw is. It may sell for less than MTG players would commonly expect.

Another aspect of misprint value is how common they are. As pointed out by Opposite-Occasion881 indirectly, a misprint with a lot of availability will go for less because it is less collectible. This is demonstrated by how common the double text printing misprint is in the original Jumpstart products specifically. If these misprints are truly as common as initial comments make them look, they may not be valuable at all and may be seen simply as cards damaged out of the pack. That said, the serialized status of these cards already makes them collectible, which should allow them to sell for more than their non-serialized counterparts.

Will Brothers’ War Have a Lot of Misprints?

The initial answer is yes. In our Collector’s Booster pack review released yesterday for The Brothers’ War, multiple misprinted cards were found in the nine Collector Booster Boxes we covered. If this ratio is truly representative of misprints in the set, they will be more common than serialized cards themselves. The sample size is much too small to come to a solid conclusion, but the potential is there. At least a majority of these misprints seem to add a jaw-dropping quality to the theme of The Brothers’ War.