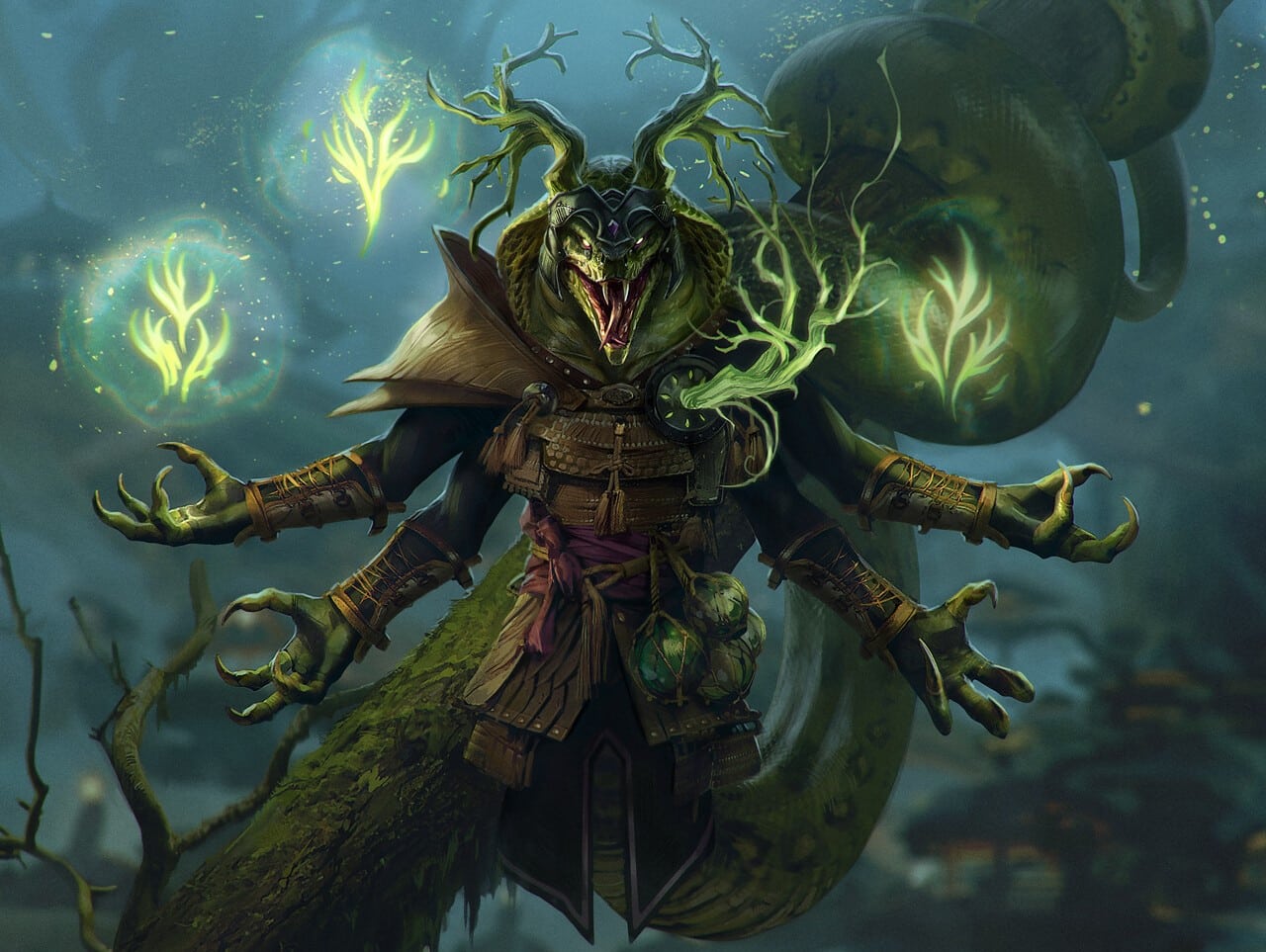 After players have some time to brew with a new set, they can create some ridiculous stuff. One particular MTG streamer decided to try something ‘cute’ that, for whatever reason, just kept working. After posting some absolutely ridiculous clips of the combo going off, it’s safe to say that some people are going to try this. Here, we’ll go over what the combo is, how to pull it off, and what you should be doing to disrupt it.

MTG Rivals League competitor and content creator Chris Botelho has an extensive resume of impressive feats in competitive MTG. Nowadays, you can find him constantly trying to push the metagame further with his MTG Arena exploits. His most recent one is more promising than even he intended.

Ironically named ‘extremely bad idea,’ his deck focuses on a few key interactions. Cradle Clearcutter is the card this deck cares most about and, much like Goldspan Dragon in the Jeskai Storm deck legal in Standard recently, is necessary for this bizarre combo. Cradle Clearcutter does a straightforward thing: tap for green mana equal to its power. Six mana is pretty expensive for a creature that just adds more mana, but three mana for a combo piece is not too bad in Standard.

Boon of Boseiju and Witch’s Web creates the unique opportunity to untap Clearcutter while adding more power to it. This can allow Cradle Clearcutter to tap again for even more mana. While cute, this isn’t enough to win the game. It is enough to ramp up to Portal of Phyrexia, which can happen often, but Chris decided to take things a few steps further.

This loop consists entirely of cards from Kamigawa: Neon Dynasty, so it has existed since then. It’s seen some fringe competitive play, but it never made its mark on competitive MTG history. The idea is to use Shigeki’s Channel ability to recur a bunch of cards. Notably, because Shigeki cannot recur Legendary creatures, it cannot recur an extra copy of itself.

To get around this, you can recur Colossal Skyturtle, another Kamigawa: Neon Dynasty card with Channel. This Channel ability can swap out the Skyturtle for another card in your graveyard. Ideally, that card is Shigeki. With this loop, you can recur an endless amount of value as the game goes on.

A separate Channel ability gives the Skyturtle some flexibility, allowing you to bounce problematic creatures and buy yourself time to pull off a combo finish.

The downside to this combo is it is incredibly mana hungry. To recur even two cards with Shigeki, you need to pay 4GG. To recur something with the Skyturtle, you need to pay an additional 2G. This makes for a nine-mana loop that’s incredibly hard to recur constantly, even in a slower format like Standard. You can recur just the turtle for four mana with Shigeki, but this isn’t effectively accomplishing anything.

Fortunately, Cradle Clearcutter and Boon of Boseiju creates a ton of mana that will perpetually increase. As long as you can float nine mana, have all four cards, and the Clearcutter has haste, you can, theoretically, create infinite green mana and infinitely grow the Clearcutter’s stats, eventually swinging for infinity to end the game.

Unfortunately, the problems don’t stop here. Cradle Clearcutter’s ability to generate mana at its prototyped one power is rather underwhelming. This is undermined by the fact that Boon of Boseiju is technically a mana-positive spell, so the actual amount of mana you need heavily depends on your Clearcutter’s power. We technically need eleven mana to get this combo going, and we need to keep creating eleven mana to keep it going (even though the untap spells tend to be mana-positive). Enter Mindlink Mech, a way to upgrade Clearcutter’s one power to four and a way to immediately give it haste.

To explain, Mindlink Mech copies whatever nonlegendary creature is used to crew it. That means that Mindlink Mech can copy Clearcutter and immediately tap for four mana. Boon of Boseiju can pump it up a bunch, untap it, and float a ton of mana. Here are some clips that Botelho posted on his Twitter page, showing off this new ridiculous combo.

The last part of this deck is an alternative payoff for a gigantic ramp deck: Portal to Phyrexia. This nine-mana artifact can obliterate any game that it comes down on by forcing your opponent to sacrifice three creatures, while offering a reanimation spell for every one of your upkeeps. The downside is the very high mana cost. Getting a large Clearcutter can fix this, but there’s too many ways that this can brick. This is one of the most expensive cards in The Brothers’ War for a good reason.

Arms Race is a unique enchantment that allows you to cheat in expensive artifacts, of which this deck has two significant ones. Portal to Phyrexia can be cheated in to stop an opponent’s offensive, and Clearcutter can be cheated in for its non-prototype cost. It also gives the Clearcutter haste, allowing you to go for the combo immediately. For reference, as long as you have even a Witch’s Web, cheating in a Clearcutter like this is mana-neutral. The Web even allows you to generate six mana. Another cute trick is you don’t have to cheat these artifacts in on your turn. If you cheat in Portal to Phyrexia on your opponent’s end step, you can get the resurrection ability on your untap before it dies at the end of your turn.

Perhaps the biggest issue with this deck is how fragile the combo truly is. The only thing you need to do to beat this combo is take out the Cradle Clearcutter that’s being targeted with an untap spell. Arms Race also has the potential to dump a Portal to Phyrexia on you, so having an answer to that is also valuable. That’s a bit of a taller order since enchantment removal is a bit more unusual. Still, cards like Destroy Evil saw maindeck play throughout the Dominaria United Standard metagame in response to commonly seen threats like Sheoldred, the Apocalypse, and Fable of the Mirror-Breaker.

Is this Really a Bad Idea?

This is jank to the extreme at first glance, but it’s some incredibly interesting jank that seems to be working. Chris Botelho’s deck is slowly gaining a more significant following, and I wouldn’t be surprised if you run into a few people trying to make this work on MTG Arena. The next Regional Championships will be Standard, and this MTG Arena infinite combo, in an evolved form, may see more serious consideration than we think. Midrange has dominated Standard for an incredibly long time, and combo decks have historically taken a dump on them. Nothing beats a slow resource trade better than untapping and completely obliterating your opponent in one turn. At this point, the deck does look a bit goofy, but with some work, we may have a respectable archetype on our hands. If you want to see more of this deck, Chris occasionally streams on Twitch.