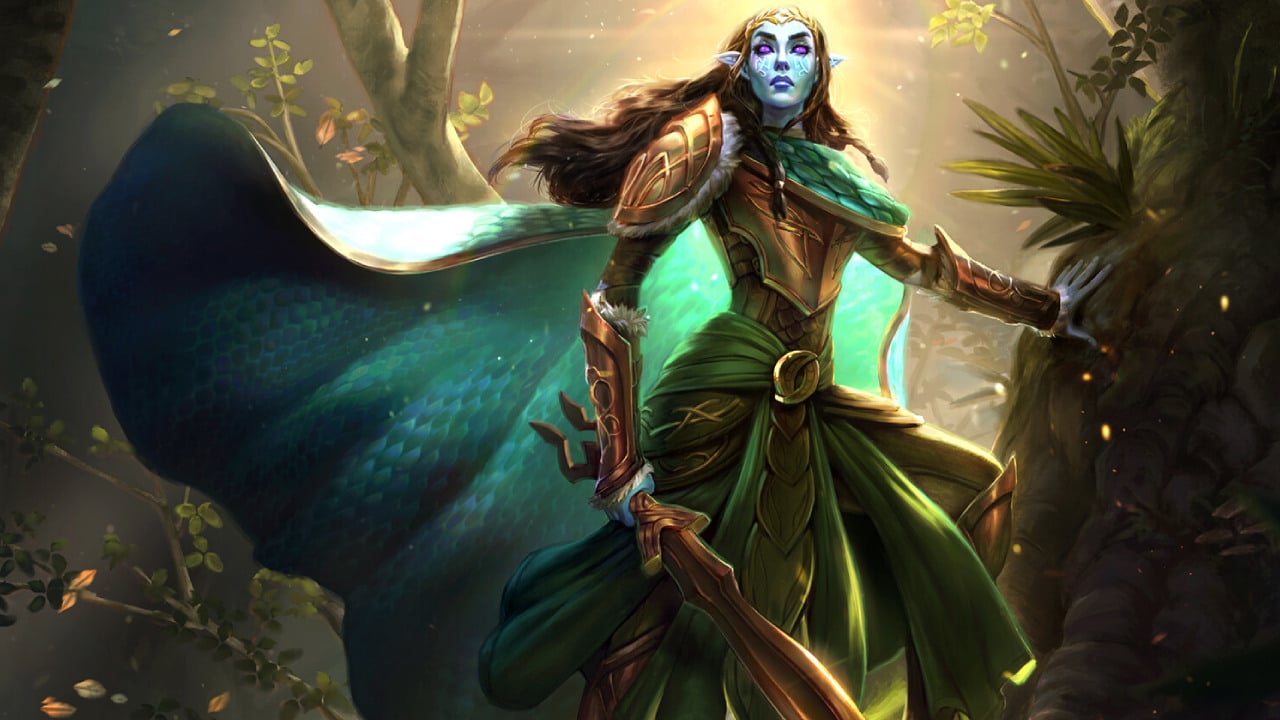 Earlier this month, we saw the release of the highly anticipated Kaldheim Commander decks from Wizards of the Coast. Carrying on last year’s theme of the “Year of Commander”, these decks provide a gateway for players to enter Magic’s most popular format.

Today I’m looking at Elven Empire, the elf-themed preconstructed deck with Lathril, Blade of the Elves at the helm. Your goal is to amass as many elves onto the battlefield and turn sideways while encouraging Lathri’s ability to create more elves.

Fortunately, there various ways to upgrade your Elven Empire deck regardless of your budget and background in the game.

Let’s begin with the budget upgrades and how you can tune your deck to offer better win conditions. You don’t have to spend a bunch of money in order to have a successful deck.

As you are looking to make tokens with Lathril’s ability, you can attack with your elves to drain your opponent’s life totals. Extending this, you can simply tap your elves to make mana if you want to ensure your opponents feel the sting. Due to how many elves you’ll have on the battlefield, this can stack up to impressive amounts. Throne of the God-Pharaoh is a cheap artifact that offers inevitability if you are unable to connect with your opponents. Having alternative ways to finish off your opponents is a sensible option within Commander. Also, as it is a ‘loss of life’ effect, it evades players who have hexproof so you can always impact life totals.

If you are cracking open Kaldheim packs, then Harald Unites the Elves is a decent card to keep in mind. It offers recursion, a permanent anthem effect, and creates awkward blocks for your opponent during the combat step. It is a little on the slow side but once it gets going, it’s a tough card to beat. Naturally, Harald Unites the Elves works best with more elves on the field, which Lathril offers in abundance.

Mana fixing is important in a two-color Commander deck as you want to cast your spells with ease. Unclaimed Territory ensures you can cast your elves regardless of their mana value or demands. Also, it’s good to have untapped mana sources so you can cast your early mana dorks such as Llanowar Elves and Elvish Mystic to progress your board. There are other mana sources you can run too, such as Undergrowth Stadium, Gilt-Leaf Palace, and Overgrown Tomb if you want to improve the consistency further.

Read More: 10 Best Planeswalkers That Can Be Your Commander

Beastmaster Ascension another great option if you want to go over the top with your creatures. Since you have so many cheap elves, it’s easy to meet the second criteria on the enchantment allowing a commanding board state. Not only do your opponents need a sweeper to deal with the onslaught of attacking elves, but they also need something to remove the enchantment. Beastmaster’s Ascension demands a lot of answers which can immediately put your opponents on the back foot. Another consideration is Doubling Season, as you’ll get double the counters with a Beastmaster Ascension in play, and double the tokens off Lathril’s ability.

Read More: Everything You Need to Know about Strixhaven’s Mystical Archives

Casting cards from the top of your library is great for card advantage, and Realmwalker offers this in abundance. Coming from Kaldheim, the shapeshifter is a must for any tribal strategy that is in green. Given that plenty of your elves are cheaply costed, this allows you to chain off multiple elves into play in one go. It’s a uniquely powerful card that can get out of hand if your opponents are unable to answer it.

If you want to invest further, there are a few powerful spells that complement the strategy but come at a hefty price tag.

One of the most versatile spells within the Golgari pairing, Assassin’s Trophy ensures you can remove any permanent with ease which also includes lands. In a game of Commander, trading a huge threat in exchange for a basic land only becomes better as the game progresses. Going further, you have Deathsprout, Abrupt Decay, and Maelstrom Pulse if you want to add broader removal within your build.

Perhaps one of the best finishers in Commander, Craterhoof Behemoth is a staple in elf strategies as it is a guaranteed win condition. Often you’ll amass your board with elves and tutor up your Craterhoof Behemoth with either Chord of Calling or Natural Order for the win. With this, it does boast a high price as it’s one the most effective ways to finish your opponents in Commander.

From Throne of Eldraine, The Great Henge is a staple in any green-based creature Commander deck. You’ll rarely cast this for the native 9 mana as your creatures will have high power and discounting the spell further. Although it can cause some tension with Lathril’s ability since tokens do not trigger The Great Henge, the value is too good to pass up. It does not matter whether you are looking to go large or wide, The Great Henge will always perform well since it does so many things at once.

Read More: Strixhaven: School of Mages: Ranking The 5 Commands, From Worst To Best

As you are in black, you can run some of the best tutors available within the format. Reprinted in Commander Legends, Vampiric Tutor is one of the more powerful effects available and allows you to find whatever you need at the expense of two life. Extending this, Demonic Tutor, Diabolic Intent, and Grim Tutor are all excellent options to have alongside Vampiric Tutor if you want more ways to find a particular card.

Read More: What are the 5 Strixhaven: School Of Mages Colleges

Another effect similar to Craterhoof Behemoth is Allosaurus Shepherd. As well as offering an impressive overrun effect, the Elf Shaman also ensures itself and your creatures (including your Commander) are uncounterable. This is a great way to establish your board state effectively without worrying about countermagic. It does fall on the expensive side thanks to Jumpstart scarcity and Legacy application, however, it remains a powerful option if you want to strengthen your deck.