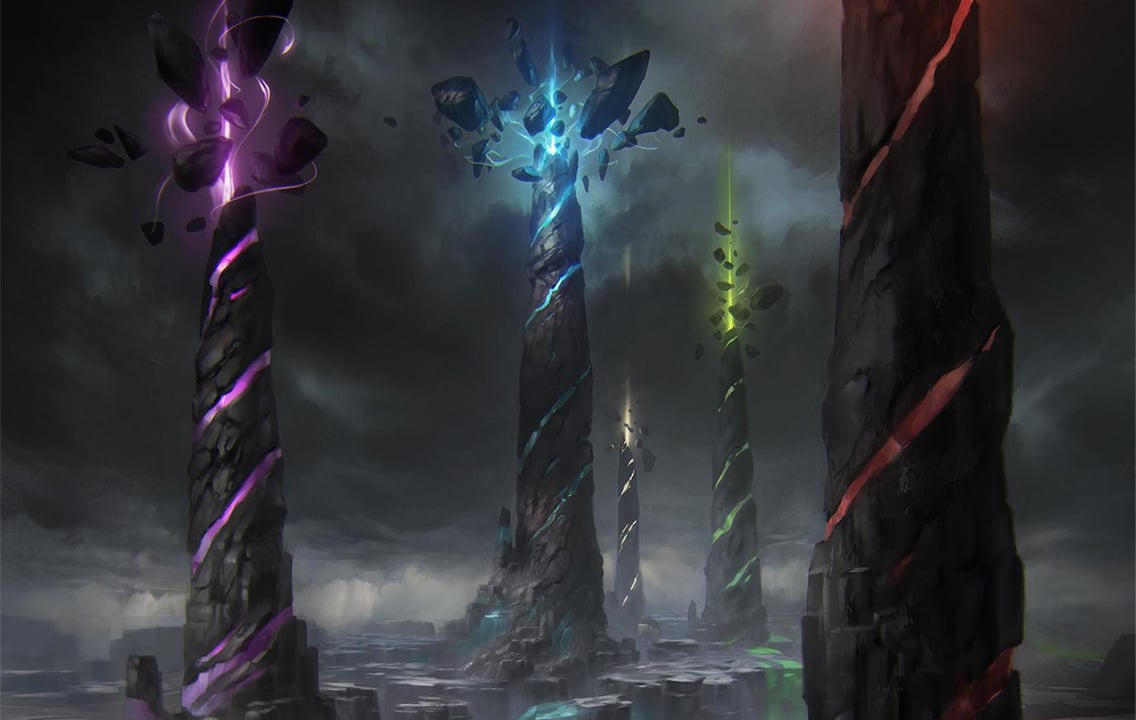 With Double Masters 2022’s spoiler season well underway, we’ve already seen several dramatic reprints to get excited about. Alongside reprints for Wrenn and Six, the trio of Eldrazi Titans, and Dockside Extortionist, we’ve also seen Wizards of the Coast print something very unusual in Double Masters 2022. A brand new card.

Beyond being the first new-to-Magic card to appear in a Masters set, Cryptic Spires also feature a new mechanic, drawing. When creating their deck, players are instructed to physically draw on the card by circling any two of the colors displayed at the bottom of Cryptic Spires. Once in play, Cryptic Spires lets players add “one mana of either of the circled colors” to their mana pool.

Previously, players have only been instructed to draw on their cards in the case of substitute or checklist cards. Found in Innistrad and Zendikar Rising, these cards allowed a player to substitute the position of a double-faced card in their deck to keep all card backs indistinguishable from one another. Unlike Cryptic Spires, this did not affect gameplay as it is merely a visual change.

It is currently unclear if Cryptic Spires will appear in non-Masters sets in the future.

Is Cryptic Spires any good?

Despite its practical applications, players haven’t taken too fondly to Cryptic Spires. Already coined with the nickname ‘doodle lands’, users on Reddit have viciously mocked the new card with comparisons to Un- sets, and custom user-created MTG cards. Thanks to its unique drawing mechanic, comparisons to the novelty Acorn card field Un- sets aren’t entirely unfounded. Despite this, Cryptic Spires’ usefulness isn’t to be understated.

Beyond saving Draft and Collectors Boosters from being flooded with gates, Cryptic Spires provides Double Masters 2022 much-needed mana fixing. This fixing is sorely needed as, unlike typical sets, Double Masters 2022’s allows players to draft any of the ten three-color trios. Each of these color trios is “viable, functional,” and “have interesting identity and flair to them,” according to Magic: the Gathering’s Game Design Manager, Bryan Hawley.

“It is very good at ensuring players have access to the right amount of fixing,” Hawley continued. This fixing should prevent players from devolving into “four of five color soup,” as seen in past tri-color sets such as Streets of New Capenna. With Cryptic Spires appearing in every Draft Booster, players can “prioritize fixing independently from the colors you’re choosing.”

Cryptic Spires is also legal in any Commander deck. Since it is substantially weaker than most dual lands, however, there’s not much reason to play it.

Ultimately, while it is a bit strange, Cryptic Spires should lead to a more entertaining draft environment. Players should have more freedom to build their decks and enjoy the draft they spent so much money on without the need to first pick all the fixing you can get your hands on. That is so long as no one goes around drafting 45 Cryptic Spires just to be mean.

If you draft a Cryptic Spires come July 8th, make sure you use a pencil when drawing on the card, as they are reusable and changeable between games.