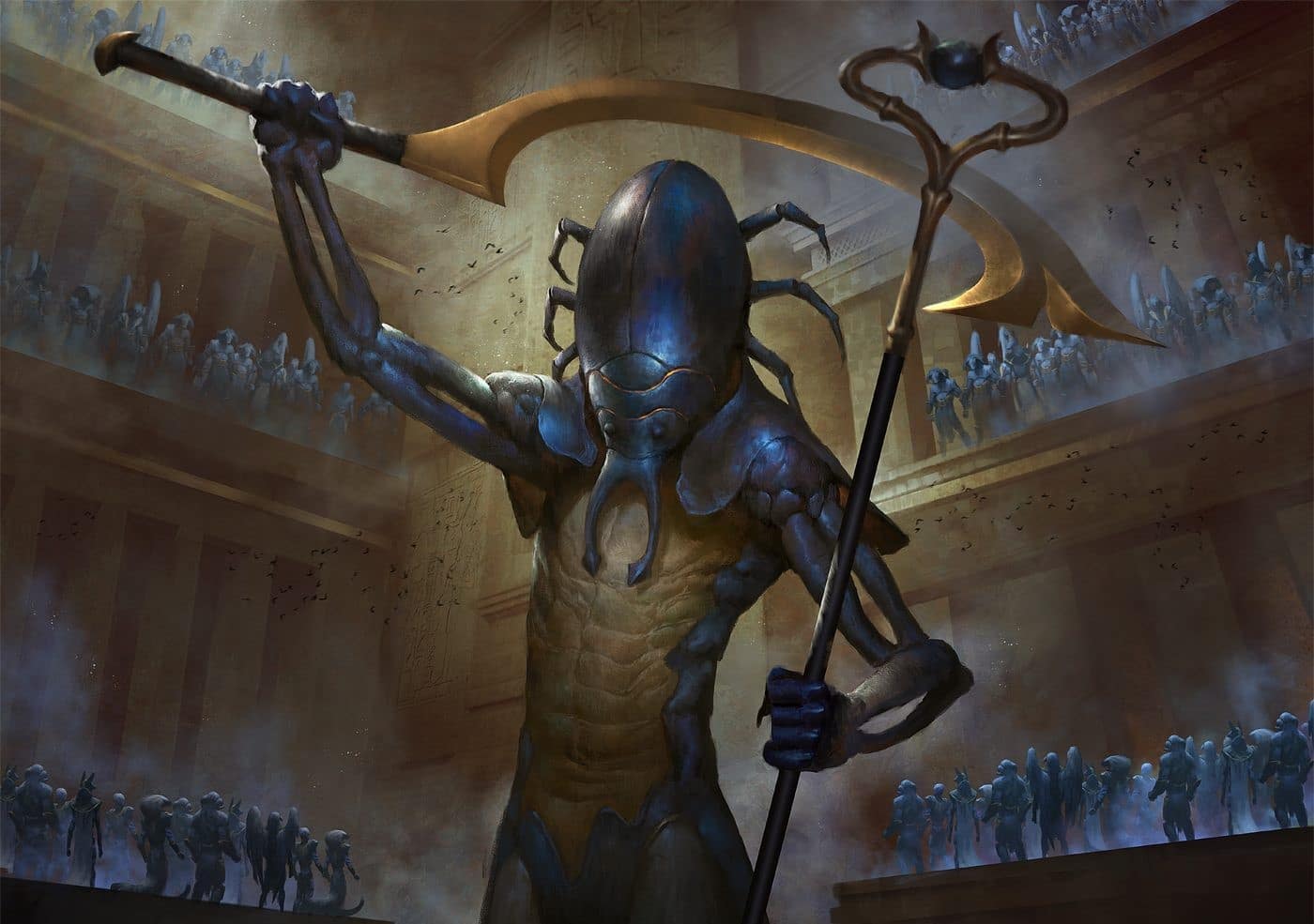 The new December Secret Lair Super drop is upon us! Honestly, some fantastic reprints are coming out in this month’s Secret Lairs that may excite MTG players. That said, right at the end of Magic’s spoiler for the series was an exclusive card. The Scarab God is a fantastic MTG card used by Commander players and control players alike to take over games, and the card is finally getting a full-art reprint! The catch? You need to spend $200 on other Secret Lairs to get one.

This Scarab God by Barely Human was previewed at the end of the December 2022 Secret Lair Superdrop. This card was initially printed in Hour of Devastation and saw a reprint in the original Double Masters set. There is a premium printing of the card as an Amonkhet Invocation, but, due to exclusivity, it’s difficult to argue that printing as a reprint.

This promotion is as reads above. For each $200 spent in a single order, the customer will receive an extra non-foil copy of The Scarab God as pictured above. This is, apparently, also the only way to get this version of The Scarab God.

Regarding secondary market value, the original Scarab God is the cheapest, sporting a healthy chase-card price of $30. Anything with a limited amount of accessibility is a decent reprint, and the price point on The Scarab God deems it as being no exception. We have absolutely no idea what the value of something like this Scarab God is going to be since it hasn’t really ever been done before. That said, this is, basically, an incredibly valuable box topper.

It is somewhat challenging to try and figure out exactly how much this will be worth. We’ve had full-art Double Masters box toppers go for a lot of money in the past, but those have an extra layer of randomness to them, so they’re in a realm of their own. The same goes for the Box-Toppers seen in the Ixalan days. $200 goes above and beyond a non-premium box’s average value nowadays, so this box topper may naturally have a larger markup. In terms of prices, we may be able to expect a similar markup here compared to other playable Box Topper cards. With that in mind, here are a few examples:

Birds of Paradise from Magic 2011 is one of the most expensive Box Topper cards to ever exist in MTG. This sees play in both competitive formats, like Yawgmoth Combo in Modern, and is also a Commander all-star. This card currently goes for about $60 in its Near Mint version, but Magic 2011 has been out-of-print for quite a long time now, adding exclusivity as a major driver for this card’s price point. This is much more expensive than the cheapest version of Birds of Paradise.

Flusterstorm is another impressively expensive Box Topper from Modern Horizons One. This sees a ton of play in Modern and Commander while also seeing some play in older formats. Flusterstorm is fantastic at winning a counterspell war since creating multiple copies of Flusterstorm makes it very difficult to counter. If your opponent can’t pay the tax, you can generally get their Instant or Sorcery countered for the low cost of one mana.

As the name suggests, Flusterstorm’s price is somewhat inconsistent. At this point in time, however, you can expect to find the card for about $28. This card is currently experiencing a price spike as a result of an added relevance in Modern over the past few format shifts. Notably, even with a new artwork, this version of Flusterstorm is not worth a premium. This must be kept in mind when evaluating a potential value for The Scarab God.

Perhaps the most infamous Box Topper in MTG’s history, Nexus of Fate was an archetype of its own in multiple for quite a long time. The card has since been banned from various formats but having one of the most competitively relevant cards only be available via a box topper created a situation where the card had a gross supply and demand problem even when it was still in print. Fortunately, that will not be happening with this Scarab God card, so we can only hope this remains a remnant of the past.

Because Nexus of Fate has since been banned in multiple formats, the card does not go for too much anymore. You can expect to find a copy of this card for about $16-17, even with the bans in place.

This hasn’t really been done before, and with a $200 bar to entry, it’s not hard to believe that players’ first reactions were not favorable. Violetlaxuli points out a particularly valid point, stating that it “would be really cool to get that Scarab God, but far too expensive to buy anything directly from you internationally.” These Secret Lairs do have a significant shipping problem to anywhere outside of the U.S. We wrote about that previously.

Regarding how much this Scarab God will be worth, I would pin it somewhere between $40-$50. Even with a different artwork, past Box Topper reprints don’t seem to have much of a premium from other card variants. That said, I can’t imagine $200 worth of Secret Lair products will be as commonly bought as a Draft Booster Box or Even a Set Box. If the card saw more competitive play, like the recent Omnath, Locus of Creation promotional card, I would put a higher markup on this card. Another notable thing about this particular Scarab God is that it is not a foil card. Most players who will want this full-art exclusive card will probably want it for Commander, where foils are generally preferred over non-foil cards. Therefore, the markup I am expecting to see on this card is minimal.

On a parting note, this is likely the most exclusive playable MTG card you’ll run into this December. There is a Holiday Gift card going out, but that one is an Acorn Card.

Fortunately, there are some solid reprints coming in the December 2022 Secret Lair Superdrop. For those who are interested in getting their hands on The Scarab God, there’s probably a financially savvy way to do it. We’ll be looking into the initial values of all the Secret Lairs from this drop tomorrow, so if you’re interested in something on the list, be sure to check back!