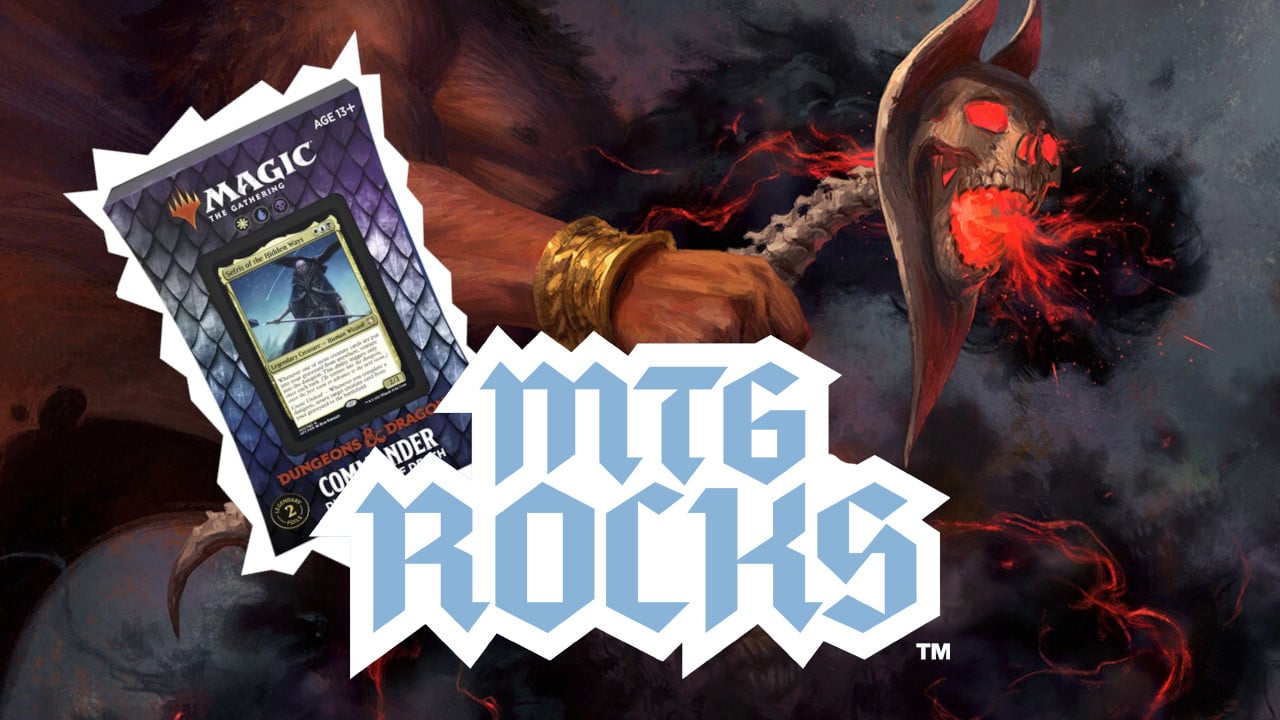 The Dungeons of Death Commander deck revolves around Sefris of the Hidden Ways and the new Dungeon mechanic brought about by the D&D set, Adventures in the Forgotten Realms.

There are several unique cards in Dungeon of Death that now pop up in various Commander decks, and many appreciated reprints are now available for cheap.

But maybe you don’t want to spend $35.00 on the whole deck. Maybe you just want a few choice single cards. That’s fine! Here are some of the best single cards you can buy from the deck!

Best New Cards to Buy From Dungeons of Death

A lot of players looked over Wand of Orcus when Dungeons of Death first came out. Then Innistrad: Midnight Hunt, and more specifically, the Undead Unleashed Commander deck released and Magic: the Gathering players went crazy for zombie cards.

The zombie hype generated by Midnight Hunt caused zombie cards from throughout Magic’s history to spike in price, including Wand of Orcus.

Wand of Orcus is about $12.00 today, but for good reason. The card is amazing. It enables you to make massive alpha strikes with your zombies by giving them deathtouch nearly every combat step. On top of that, the legendary equipment also grows your army. If you equip it to a massive threat and attack, you make 2/2 zombie tokens equal to the amount of damage you deal.

Rod of Absorption is like a funky Mizzix’s Mastery in that it allows you to cast a swath of spells from your graveyard all at once. But it works a little differently.

The artifact firstly has to sit on the battlefield and exile instant and sorceries over time. This is a nice anti-graveyard effect that coincidentally hits all of your opponents’ spells in addition to your own.

Then, once you reach a critical mass of exiled spells with the Rod, you can sacrifice and pay X mana to cast every spell with mana value X or less. You even get to cast all of your opponents’ exiled spells too!

Minn, Wily Illusionist makes for an interesting commander in her own right. She’s like a buffed-up Improbable Alliance in that she makes creature tokens whenever you draw your second card each turn. But she’s far better than Alliance because the 1/1 Illusion tokens she makes get bigger for each of them on the battlefield.

This can be pretty easily done considering many Illusions are naturally big stat-sticks that sacrifice themselves such as Phantasmal Dragon, Phantasmal Abomination, and occasionally Phantasmal Image.

Best Reprints to Buy From Dungeons of Death

Phantasmal Image was nearly $15.00 before it got reprinted in the Dungeons of Death Commander deck. It’s a common inclusion in many competitive EDH decks as it can copy massive threats for just two mana. It also sees play in Modern decks like Humans, where it can copy lord effects like Thalia’s Lieutenant to buff your entire team.

Now, Phantasmal Image is available for about $4.00, which is a steal for such a powerful and widely played card.

Lightning Greaves is one of the most played cards in Commander. It is a great way of protecting your commanders while giving them ridding their summoning sickness with haste, enabling them to immediately activate their abilities or attack to trigger combat-related effects.