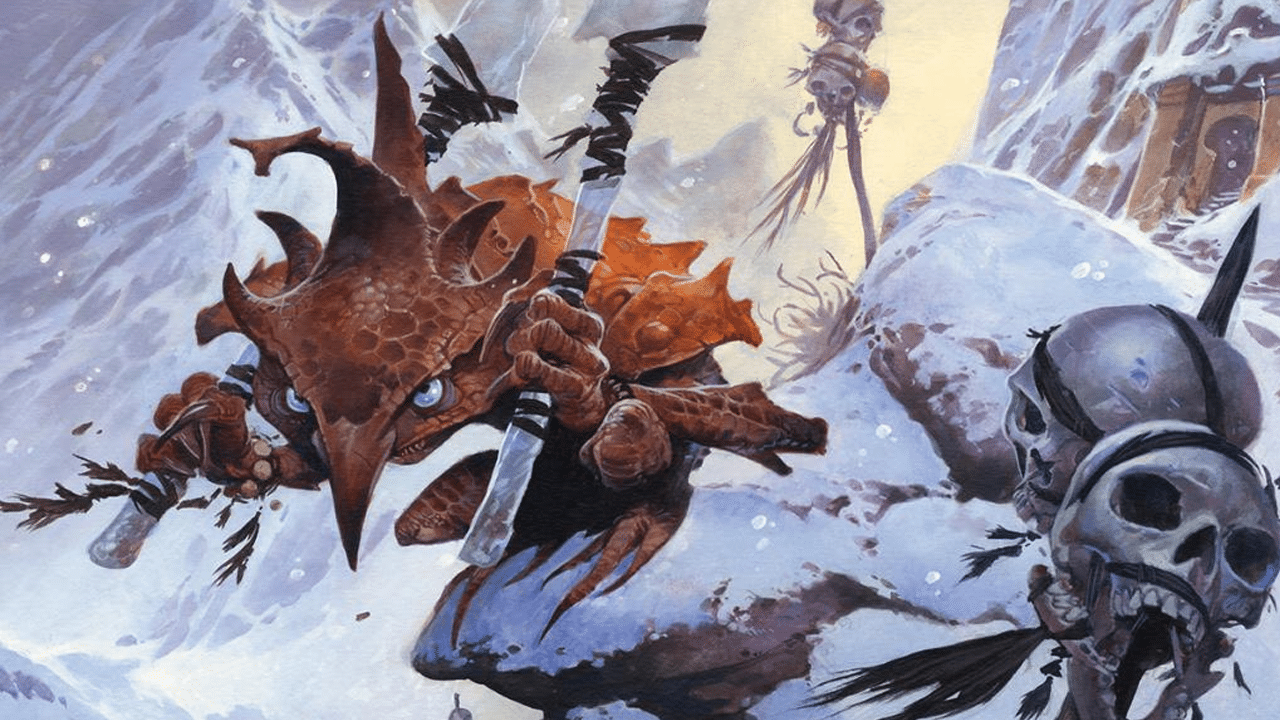 With the Strixhaven spoilers now in the past, we’re already onto the new Commander decks for this year. It’s basically a non-stop EDH party, and we love it.

However, it’s easy to see that the mono-colored Commander decks aren’t getting a huge amount of love, at least when it comes to the beasts that can lead them.

So, to try and even things out a little, we decided to list the best Mono-Red commanders available.

First of all, shout out to Valduk, Keeper of the Flame, for just being a huge amount of fun for people who like putting as many things as possible on one Creature and then just winning the game because of it.

We respect you, we appreciate you, but we don’t think you in the ten best mono-red commanders, and we’re really sorry about that. Anyway, onto the list.

First up, we’ve got a new entry from the plane of Kaldheim. Magda, Brazen Outlaw, is a two-mana 2/1 that gives other Dwarves you control +1/+0. That’s not bad on its own, but she also makes it so that whenever a Dwarf you control becomes tapped, you create a Treasure token.

Then, you can sacrifice five Treasure tokens to find an Artifact or a Dragon from your library and put it onto the battlefield. There’s a lot of lines of attack here, and a few different ways to build the deck, but they’re all a lot of fun, and having lots of options is always a good thing.

9 – Feldon of the Third Path

Feldon of the Third Path looks MTG Santa Claus. Also, he costs three mana for a 2/3 with no particularly noteworthy combat potential. Despite that, he’s got an ability that makes him incredibly powerful.

For three mana, you can tap Feldon to create a token of a Creature card in your graveyard, except it’s also an Artifact on top of other types. It then gains haste but has to be sacrificed at the end of the turn. If you can find ways to copy this ability, make the most of tokens, or just have very silly cards in your graveyard, then Feldon is extraordinary.

Minotaur’s are pretty powerful commanders as it turns out, and Neheb, the Eternal is a beast. Neheb is a five-mana 4/6 with afflict 3, which means that the defending player loses three life if they block Neheb.

Also, at the beginning of your post-combat main phase, you add one red for each one life your opponents have lost this turn. This can allow for some really absurd stuff in your second main phase, and it’s not like there aren’t plenty of ways to spend that mana in a Red deck.

Lathliss, Dragon Queen asks an important question, “what if there were more Dragons?” For six mana, you get a 6/6 with flying, and you can also pay two mana to give all of your Dragons +1/+ until the end of the turn.

They also make it so that if a nontoken Dragon enters the battlefield under your control, you get to create a 5/5 Dragon token with flying. Two Dragons for the price of one is absurd, especially if you combine it with a card like Scourge of Valkas.

Sometimes you just want to annoy everyone you’re friends with, and that’s a perfectly respectful motive if you’re aiming to cause chaos. If you want a commander that is all about that, then you should absolutely be playing Zo-Zu the Punisher.

Zo-Zu is a three-mana 2/2 that makes it so that whenever a Land enters the battlefield, Zo-Zu deals two damage to that Land’s controller. If you combine that with any other kind of punishment or Stax strategy, then nobody will like you, but you’ll get to have fun.

Sometimes it’s nice to bend the rules a little and use a Planeswalker as a Commander, and while there are lots of good ones, the best Mono-Red one is Daretti, Scrap Savant. Daretti costs four mana and comes in with three loyalty. His first ability lets you discard up to two cards and draw that many, and the second lets you sacrifice an Artifact to return one from the graveyard to the battlefield.

Next, we’ve got Moraug, Fury of Akoum. Moraug is a six-mana 6/6 Minotaur Warrior that gives every Creature you control +1/+0 for each time it has attacked this turn. That’s cool if you’ve got ways to add extra combat steps, which is something Red does quite well.

It’s also something that Moraug does well, because if a land enters the battlefield under your control in your main phase, you get an extra combat phase after it, and all of your Creatures untap at the beginning of that combat phase. If you can’t get the job done with one attack, why not try multiple?

3 – Purphoros, God of the Forge

We’re up to the obligatory mention of a God now, and Purphoros, God of the Forge is so good that some playgroups just ban him. For four mana, Purphoros is an indestructible 6/5 that requires at least five devotion to Red to be a Creature. You can also pay three mana to give you Creatures +1/+0 until end of turn too.

The main ability here though, is that if another Creatures enters the battlefield under your control, Purphoros deals two damage to each opponent. Red is pretty good at flooding the board with tokens, especially if you’re looking at Goblins, so this is a pretty impressive ability.

Speaking of Goblins, Krenko, Mob Boss is basically the one gobbo to rule them all. Krenko is a four mana 3/3 that’s rubbish on his own, but can tap to make X 1/1 Goblin tokens where X is the number of Goblins you control.

Given that Goblins usually run in packs, you’ll often find yourself rapidly blasting past twenty Goblins with very little effort, so if you build your deck intelligently, you can flood the entire board in an instant, and nobody can stop you.

The best Mono-Red commander, in our opinion, has to be Torbran, Thane of Red Fell, and not just because he has Red in his name. Torbran is a four mana 2/4 that makes it so that whenever a Red source you control would deal damage, it deals that much damage plus two instead.

Basically, all of your 1/1 Goblins now do three damage with each hit, and Purphoros now does four damage to every opponent whenever a Creature enters instead. There are so many ways to deal tiny damage to everyone (Impact Tremors) that this ability will absolutely floor everyone brave enough to stand up to you.