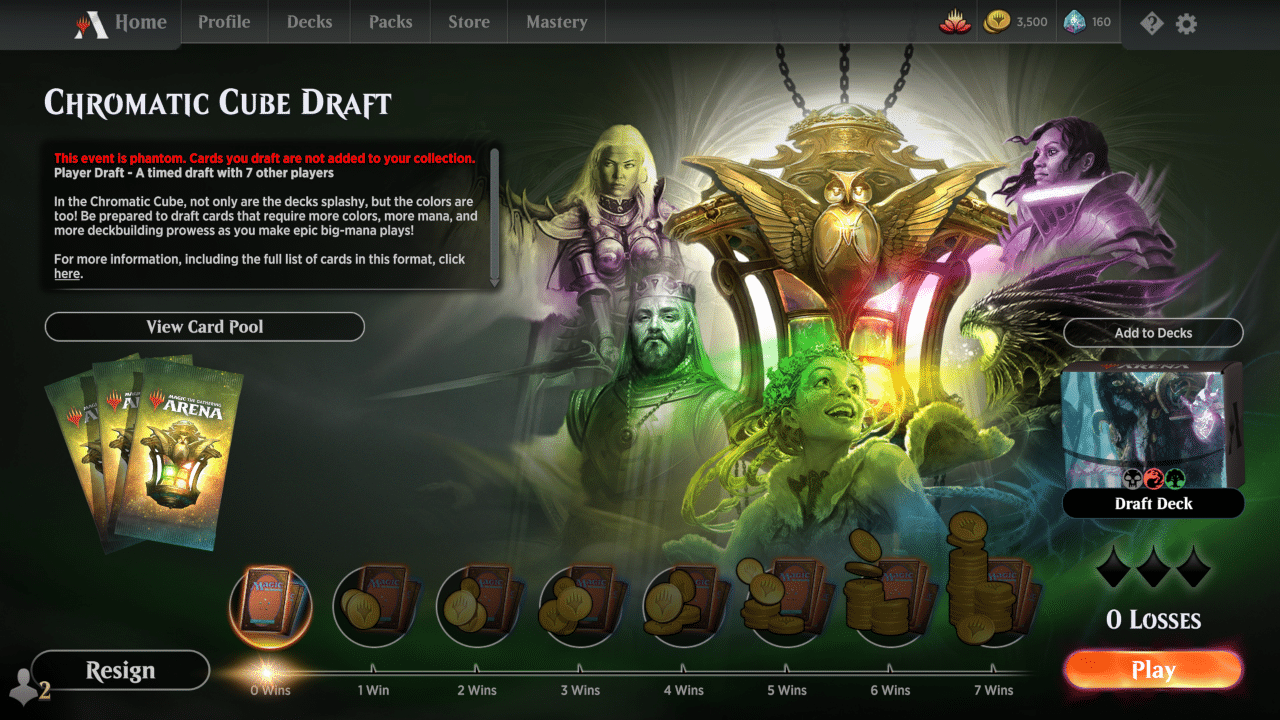 Magic Arena's Chromatic Cube Is Fun, But We Want More

Magic Arena just released their newest iteration of Cube over the weekend, called the Chromatic Cube. The cube was designed by David McDarby, and he proposed that this cube was designed with the same Philosophy as the Live the Dream cube. The goal of Chromatic Cube was to have big spells, and crazy interactions just like in Commander, but in the cube format. He also says that this cube should be an “experience unlike the Arena Cube, or Tinkerer’s Cube. There are a bunch of different archetypes to draft in the color pairs, and the “dream” of the 5 color deck. I got to play a good few drafts over the weekend in this cube, and we’ll talk about it, and what really should be the next step for cube on Magic Arena.

After reading McDarby’s article on the Chromatic Cube, I was very excited to try and jump into the draft queues to really see how much fun this cube was. Cube is one of my favorite formats, and I was really hoping to find a unique experience in this cube.

The first deck that I drafted was that full on dream that McDarby talked about, with a full on Golos, Tireless Pilgrim based 5 color deck. Now Golos is one of my favorite Magic cards of all time, so when I was offered it as a Pack 1 Pick 1, I couldn’t pass it up. From there the draft proceeded nicely for me, being offered Field of the Dead, and The Prismatic Bridge, and a host of lands to be able to make the 5 color strategy function. This ended up feeling quite a bit like other Arena cubes when I draft this archetype. Nothing really felt different. Maybe this one is a fluke and so I played my draft (going 5-3) and went on to the next.

The next deck I drafted was a Big Green deck, splashing red for various ramp cards like Domri, Anarch of Bolas and Svella, Ice Shaper and white for Harmonious Archon and other cards. The beef of the deck was around cards like Kogla, the Titan Ape, Vorinclex, Monstrous Raider, End-Raze Forerunners, and Finale of Devastation. Yet again, this really didn’t feel any different than any other “big green” deck that I’ve drafted in the past. The deck went 5-3 yet again and now we move to the 3rd draft.

The 3rd draft started out a bit different, I was first offered Leyline Tyrant, and it was the best card in the pack. Then I was given Immerstrum Predator, Terror of the Peaks, Sarkhan, Fireblood and more! Okay, maybe we have something here. Red Black Dragons was one of the Archetypes that was designed into the cube, so let’s see if this feels any better than the others did. This deck was the first one that finally felt a bit different. It felt like I was really playing a big dragon deck, and definitely didn’t feel like any other experience that I had in prior cubes. This deck ended up going 5-3 (I’m the 5-3 king apparently..).

Is This What’s Best?

Ultimately my judgement of the Chromatic Cube is that it was fun! I definitely felt that it delivered an enjoyable draft and play experience overall. Did it 100% deliver on it’s promises to be an experience unlike any other Arena cube? I don’t think it entirely did. From my experience, you had to really lay into the predetermined color pairings to feel like you were having a different experience, and even then, it wasn’t a vastly different experience. The reason behind this is that the card pool of cards for Historic is relatively limited. We’re seeing a lot of the same bombs and removal pieces show up in multiple cubes. No matter how you slice it, there’s only so much that can be iterated on in the Arena cube sphere, and I think that doing another cube with just the Historic card list isn’t the way to go. Sure it’ll be a fun experience, but it could always be better.

RELATED: What is Cube in Magic: The Gathering?

I think the next step for Cube on Magic Arena is actually to bring one of Magic Online’s cube’s over. We just had a new and improved Modern Cube announced and spearheaded by Emma Handy that included cards from Modern Horizons 2. While this sort of move would be a bit of work to get everything coded into the game, it’d make a ton of sense to align the promotion of Modern Horizons 2 and bring a new and fun experience to Arena players. We’ve already seen that Wizards is willing to code in cards for specific events, such as adding the Power 9 cards for the Game Awards After Party Event, as well as bringing cards like Griselbrand in for Momir. It stands to reason that they could do the very same thing for the Cube community.

What was your experience with the Chromatic Cube, and do you think that Wizards should bring other cubes to Magic Arena? Let us know in the comments?