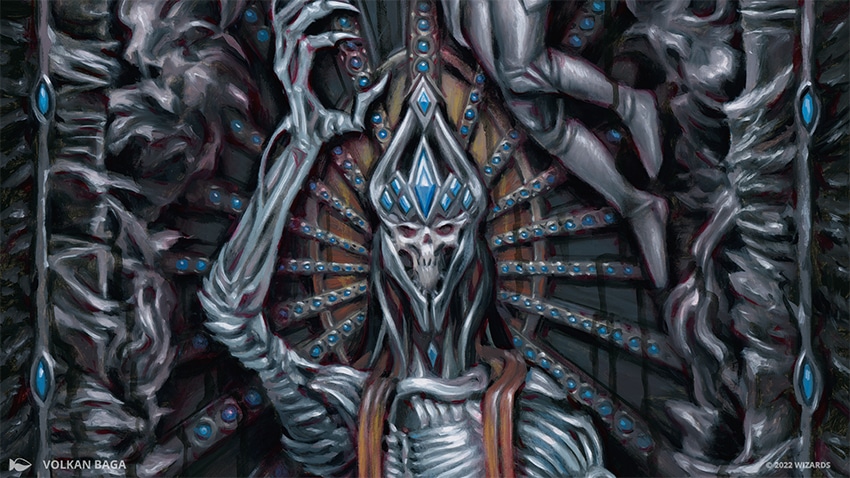 It’s August 10, 2022, and Wizards of the Coast has just released our first taste of Dominaria lore! This story featured Karn wandering about the Caves of Koilos, trying to find remnants of a pending Phyrexian Invasion. There will be spoilers from here on out, but a link to the story will be featured at the end if you want to read it yourself. Either way, leaks, and spoilers have hinted at this villain. One was evident, while the other was up in the air. Well, we know that Sheoldred will lead the Phyrexian invasion on the plane of Dominaria!

The Phyrexians are Coming!

A sleeper agent was spoiled during the Dominaria United spotlight from Wizards of the Coast a little while ago, so the Phyrexians coming to Dominaria is not a huge surprise. Wizards of the Coast haven’t confirmed it until the release of the new lore, but the background presence of the Phyrexian Praetors in the last few sets should have been enough of a giveaway on its own. Vorinclex was running around in Kaldheim, Urabrask was looking for allies in New Capenna, and Gin Gitaxus was developing a means of Compleating Planeswalkers on Kamigawa.

Either way, after digging around to find out more about the Sylex, Karn chanced upon a Phyrexian hideout. This discovery revealed four important details:

One detail that repetitively came up in the story was that the Dominarian humans that were Compleated all seemed to wear the religious clothing of Mishran worshippers. For reference, Mishra is Urza’s younger brother. The most anticipated set in this block is called ‘The Brother’s War’ for a reason…

Sheoldred, the black Praetor, has appeared on Dominaria. Karn was confused as to how the Praetor managed to get to Dominaria. However she did it, Sheoldred suffered immense damage in the Blind Eternities and is currently being repaired by her supporters. She is definitely alive, however, as Sheoldred spoke directly into Karn’s head before the events unfolded did so… While I will touch on the more critical topics, I will not spoil what happens at the end of the chapter.

This allows us to return to an unconfirmed leak from Reddit that popped up a while ago. At the same time, we are still not sure of whether this Sheoldred is real or not; it’s much more likely that this is an actual card. The picture is a little blurry, so here is what Sheoldred reads:

Whenever a non-token creature you control dies, draw a card. This ability only triggers once per turn.

Whenever a non-token creature an opponent controls dies or an opponent discards a creature card, put that card from a graveyard onto the battlefield under your control. This ability only triggers once per turn.

Needless to say, this is definitely powerful enough to see Standard play post-rotation.

Rona, a Tolarian who seems to be spearheading Sheoldred’s recovery (and the invasion of Dominaria), was seen aiding Karn. She had technology that could restrain Karn, making it difficult for him to stop Sheoldred. After digging into Rona’s character a bit, it turns out this was incredibly predictable. Gix, Rona’s mentor, was one of the original Phyrexians created by Yawgmoth. To our knowledge, Gix has been destroyed in past events, but Rona’s identity is easily seen when observing her card name from the last Dominaria set. Rona was part of Mishra’s religion, so she may have had a hand in turning them into Phyrexian worshippers.

Even before coming in contact with Sheoldred, Rona had already been studying and using her knowledge to surpass her human form. Interestingly, it looks like Rona may have already had the technology to interfere with Karn during the last Dominaria set and has been waiting all this time… Rona’s role in this story may have been predictable, but her scale was unseen. This makes her an unexpected supervillain coming to Dominaria United.

While this article gives you all of the essential things discovered about the set from the first chapter, it has not given you the state in which all the characters have been left. Want to find out? We recommend giving this chapter a read for yourself. Once you’ve done so, check out our Facebook page and leave a comment letting us know your thoughts!