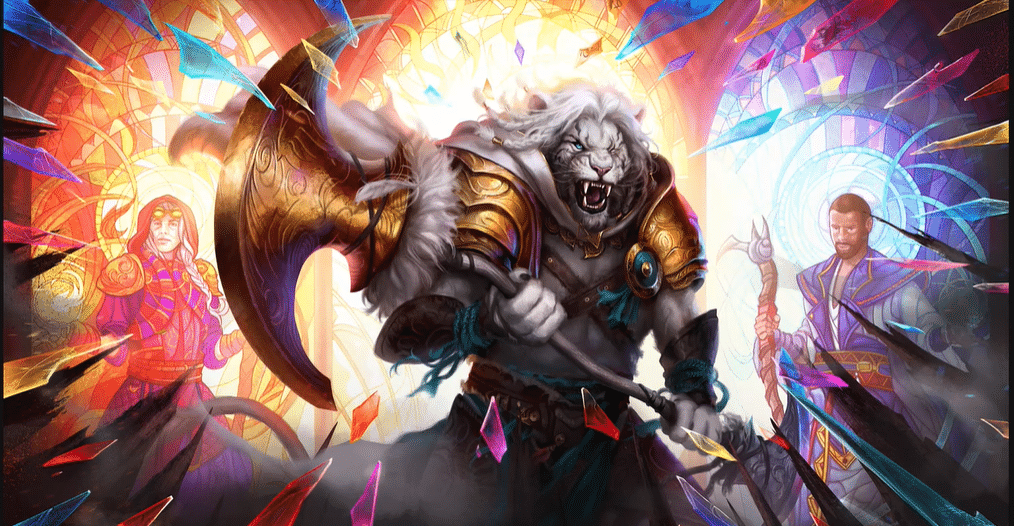 The Dominaria Reveal Stream we previewed in another article has just passed! The amount of information dropped is insane, and we won’t be going in-depth into everything right now. We will outline all the exciting news revealed on a surface level, including Dominaria United spoilers! Get ready, grab some popcorn; this is a wild ride!

Legends Cards are being Distributed in Dominaria Collector Boosters!

To celebrate Magic: the Gathering’s 30th anniversary, Legends cards will be inserted into Dominaria United Collector Boosters! The new Lost Legends promotion is being implemented after a team at Wizards of the Coast randomly found cases of Legends products sitting in a warehouse. This is a monumental landmark in MTG history, but it may be difficult for newer players to grasp just how incredible this is. These cards were printed in 1994, far before many MTG players were even born! Cards of every rarity will be included in the Collector Boosters randomly inserted. 3% of ALL Collector Boosters will have these cards inserted into them. Some cards won’t be opened or included, but there will be multiple Tabernacle at Pendrell Vale inside these packs! That’s a $4-5000 dollar card! “It’s unexpected and an amazing opening experience for anyone who gets the chance,” said Blake Rasmussen when being questioned further by Twitch chat.

It’s insane that there was something even more exciting than MTG Dominaria United spoilers for an entirely new set! Regardless, after sharing the crazy Lost Legends news, here are the spoilers revealed for Dominaria United!

Our First spoiler is Llanowar Loamspeaker. This card presents some utility, adding one mana of any color while also turning lands into 3/3 creatures with Haste. Hopefully, this should allow the Loamspeaker to have early and midgame. This seems like a card designed to push green ramp and midrange decks. As such, this should slot into Standard nicely.

Evolved Sleeper is a new take on an old design. As seen with cards like Figure of Destiny and Ascendant Spirit, you can activate Evolved Sleeper’s abilities in order to transform him into different creature types while gaining extra abilities. You can’t jump from your first ability to the third because your Sleeper won’t be the appropriate creature type. These have a long and rich history in Competitive MTG, so there is an excellent chance this will see play somewhere! On a side note, in terms of lore, this confirms that Sleeper Agents and Phyrexians will be present in the four-set story that kicks off in Dominaria United!

Temporal Firestorm is a very versatile spell that announces the return of a few older mechanics in Dominaria United. Kicker and Phasing will be returning, as you can Kick this up to twice to Phase out two creatures. Temporal Firestorm will deal five damage to everything else. This seems rather expensive in terms of mana value, so I’m not sure where it will find a home. This is undeniably powerful in a Standard context if someone can pull it off (Like Hinata, Dawn Crowned since the Kicker will get a cost reduction?)

Perhaps the most exciting of the Dominaria United previews is the introduction of Jaya, Fiery Negotiator! This four mana Planeswalker is capable of creating Prowess Monks as a plus ability! This ensures that Jaya will see some experimentation in multiple formats (Heroic in Pioneer, for instance). Jaya’s other abilities are pretty powerful as well. You can find card advantage for a small cost, kill a threat if you can go wide, and, should you Ultimate this Planeswalker, go over the top of your opponent by copying every red Instant or Sorcery twice!

My personal favorite of the spoiled cards today is the flying Fireball creature! Shivan Devastator is a Dragon Hydra that cost XR. You put X 1/1 counters on to the creature rather than attack with it. This recurrable Fireball should see a ton of play in formats with a smaller card pool. Regardless of whether this ends up being relevant or not, the flavor of this card is off the charts!

The last spoiler for the Dominaria set shown in this video was the new Stained Glass lands! These look brilliantly stunning and will be a recurring theme for more premium versions of Dominaria United cards. Expect to see a lot of Stained Glass art coming in the future!

With the introduction of Legends cards being redistributed in packs, Dominaria United will also feature reworks of some of the old (and incredibly expensive) legendary creatures introduced in Legends! As seen by the card code in the bottom left and the Set Symbol, these are not a part of the core set. Lost Legends Box Toppers will, therefore, be Eternal legal only.

Ramirez DePietro was originally a First Strike Legendary Pirate. With his new take, he gets a bunch of flavorfully very pirate-like abilities. Entering the Battlefield with Ramirez will grant you two Treasure Tokens in exchange for some life (or members of your crew), and successfully dealing damage to your opponent with a Pirate will allow you to steal your opponent’s resources by exiling a card from the top of your opponent’s library. Cards exiled this way may be cast for the rest of the game for any colors of mana.

The ability on Tor Wauki, the Younger hasn’t really been seen before. Not only does Tor Wauki improve the damage output of your other non-combat sources, but he will also deal two damage to any target whenever you cast an Instant or Sorcery! Tork Wauki has Lifelink, so you will be gaining from Tor’s triggers since he is the source dealing damage! As any Archer should, Tor Waulki flavorfully has Reach.

Like the take done for Ramirez DePietro, Tor Wauki’s statlines remained the same. Tor Wauki’s tap to deal two damage trigger has been reworked into something more modern with his new ability.

There will be 20 Legends Retold Box Toppers available, with 19 being Legendary Creatures and one a Planeswalker! These look like incredible new options for Commander, and players should be excited. I, for one, am curious as to what the Planeswalker will look like.

The Magic 30 Anniversary Promos are celebrations of older printings of cards. As can be seen, each card will show the date that it was printed, as well as feature the old foil style. You can pick these up by participating in Dominaria United Prereleases! The Fyndhorn Elves, in particular, will only come in German. This will be done for other upcoming promos to celebrate all of the languages that MTG has been printed in.

The Game Day Promos for Dominaria United are here! All participants will receive a Spell Pierce, the top eight players will receive a Gilded Goose, and the sole winner will receive a textless Omnath, Locus of Creation! Omnath is covered in text, so it’s rather humorous that the card is getting a textless treatment. The art does look fantastic, and, as stated by Blake Rasmussen, you can show off your Omnath knowledge when you recite all of the effects from memory. For those interested in acquiring these promos, Game day will occur the weekend of September 17th.

Alongside Game Day promos, Store Championship cards have also been previewed. To recap, these cards will be engraved with the LGSs name that you win them at. The Shivan Devastator, in particular, looks incredible! Store championships will be occurring in mid-October.

Also previewed was the new packaging for Dominaria United product coming out! While cards were not previewed for Commander, we did get to see the art of each Commander as well as the names. Painbow is a five-color deck led by Jared Carthalion (who has seen previous iterations). Legends Legacy is a Mardu deck led by Dihada, Binder of Wills.

Jumpstart 2022 is coming out on December 2nd! We haven’t heard much else about the set other than that, but this was also covered in the Stream. Judging from the packaging, it looks like Snow and Devils may be two themes in the packs.

The following big announcement for Dominaria United spoilers will occur on August 18th. This date was incredibly excited in the stream with a promise to ‘celebrate everything Wizards of the Coast.’ This is not an event for MTG enthusiasts to miss!

This portion of the Dominaria United Stream had the most to take away from it. There’s a lot to unpack here that we will cover in more detail in future articles, so I look forward to that! Crazy promotions like this that get players excited are what Wizards of the Coast need more of. The Lost Legends promotion is incredible, and the community is more excited than ever! Imagine pulling one of the few Tabernacles in existence through this promotion! This will create some epic moments.