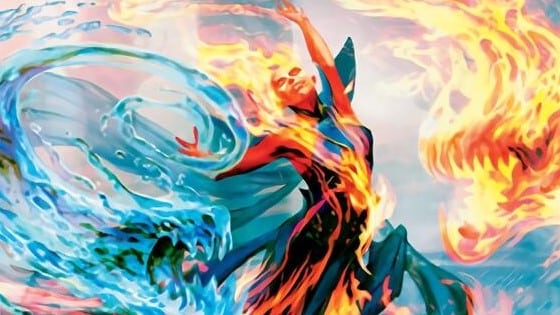 Veyran, Voice of Duality Is Going To Be Great

It’s incredibly odd that we’ve been basically chaining spoilers seasons together like a Tekken combo, but having just gotten through the Strixhaven spoilers last week, we’re already deep into the Commander 21 previews now.

It’s exciting, sure, but it’s hard to keep all of these cards in your head, especially as we’ve yet to actually play with any of them.

However, there are always a couple of cards that stand out from the rest of the set, and for us, one of those is Veryan, Voice of Duality.

Read More: You can now buy the first issue of a new MTG comic

Veyran, Voice of Duality is going to be absurd

Veyran is a three mana Blue and Red Legendary Efreet Wizard who is a mere 2/2 without the pages of text attached to it.

Thankfully this is modern MTG, and that means that we’ve got a lot of text to get through until we understand what it does. Rather than paraphrasing it, we’re just going to copy and paste it here for you: “Magecraft — Whenever you cast or copy an instant or sorcery spell, Veyran, Voice of Duality gets +1/+1 until end of turn.”

Then the second paragraph reads: “If you casting or copying an instant or sorcery spell causes a triggered ability of a permanent you control to trigger, that ability triggers an additional time.”

Basically, their ability causes their own Magecraft ability to trigger again. Still, it also makes sure that every other Magecraft trigger happens twice and also hits an obscene amount of other cards that we all know and love. For example, Kalamax, the Stormsire, would then copy your stuff again, which would also causes just so many copies of any spell you cast.

It also works with stuff like Prowess, which means you can get extra power from every cast. That means Creatures like Adeliz, the Cinder Wind, can be substantially more powerful by doubling the effects of their own Magecraft (it’s not called that, but it is that) and give all your Wizards +1/+1 twice, along with each of those Wizards also having their own triggered abilities doubled.

You can easily see how this absolutely goes off in a Red and Blue deck as the commander, but it’s great as part of the deck too, if you’re after more colors. There are plenty of incredibly exciting new cards from C21, and the whole set looks great, but Veryan, Voice of Duality is definitely near the top of the list for us.