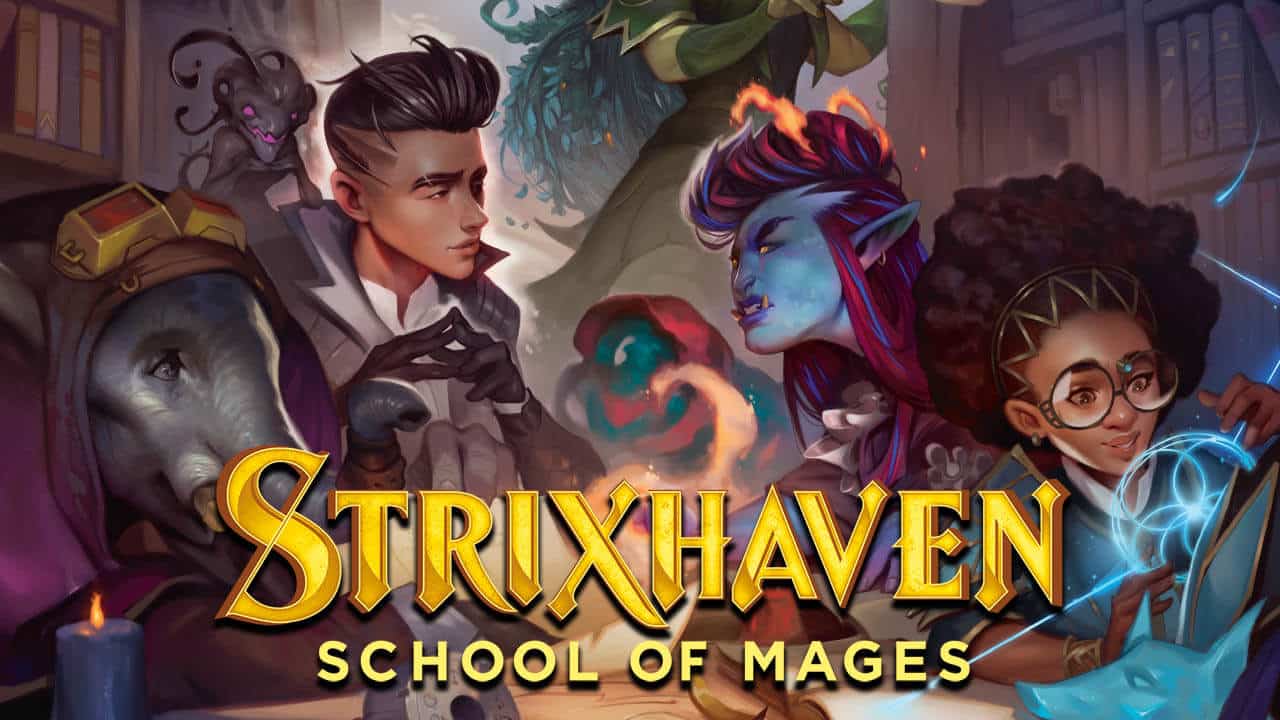 This week, Wizards of the Coast is revealing new Magic: The Gathering cards from the five brand new Commander (2021 Edition) pre-constructed decks each representing one of the five colleges of Strixhaven University: Quandrix (blue/green), Witherbloom (green/black), Silverquill (black/white), Lorehold (white/red), and Prismari (red/blue). You can check out the cards in our spoiler section here.

Today, Wizards of the Coast has revealed a new type of packaging starting with the Commander (2021 Edition) products, and change shows the company’s efforts to move away from plastic packaging. While one style of packaging looks similar to previous Commander products, there are now clear differences and two versions.

The full-color packaging showing off one of the new commanders for each Strixhaven college’s deck will be available in stores.

The “card” shown facing out isn’t a card at all but a graphic printed directly on the packaging, so there’s no longer a plasting cover holding oversized commander cards in place. The graphic printed on the package is recycable because it’s printed with a foil effect without plastic lining.

The package’s bottom features a paper zip pull to open it, and there’s a recycable deck box and packing tray inside, so there’s no longer a plastic tray holding an oversized shoebox-style deck box. The new tray has several punch-out counters (blank—they can denote anything you’d need) and a divider for inside the deck box.

Wizards went on to note that the deck box is easier to transport than before, similar to the deck boxes in Prerelease kits but large enough to hold the entire Commander deck, even after sleeving the cards.

The Commander deck also comes with double-sided tokens for the deck, a life wheel, and a replacement for the oversized foil cards from previous Commander products: the display commander. It’s printed on a thicker cardstock but note that it’s not a tournament-legal MTG card, but you can still use it to show off your commander .

Wizards also revealed a “minimal packaging version” of the deck. “While it doesn’t feature the beautiful look of the typical retail packaging, instead using a corrugated cardboard box to contain the product, it delivers almost everything the same way using even less material and space,” WotC’s Adam Styborski said.

The only difference between the “minimal packaging version” and the retail versions for Commander (2021 Edition) is that the insert try holding the deck box does not offer punch-out counters and a divider but you’ll still get everything else (the deck and deck box, plus life wheel, display commander, and double-sided tokens).

Both Challenger Decks 2021 and Commander (2021 Edition) will have updated packaging to decrease the amount of plastic and increase recyclability, and the company is planning to feature these updated packaging for future Magic products through 2021 and beyond.

It’s good to see Wizards’ efforts in increasing recyclability in their MTG products. This kind of reminds me of how some Japanese toothpaste brands are not packaged in boxes.