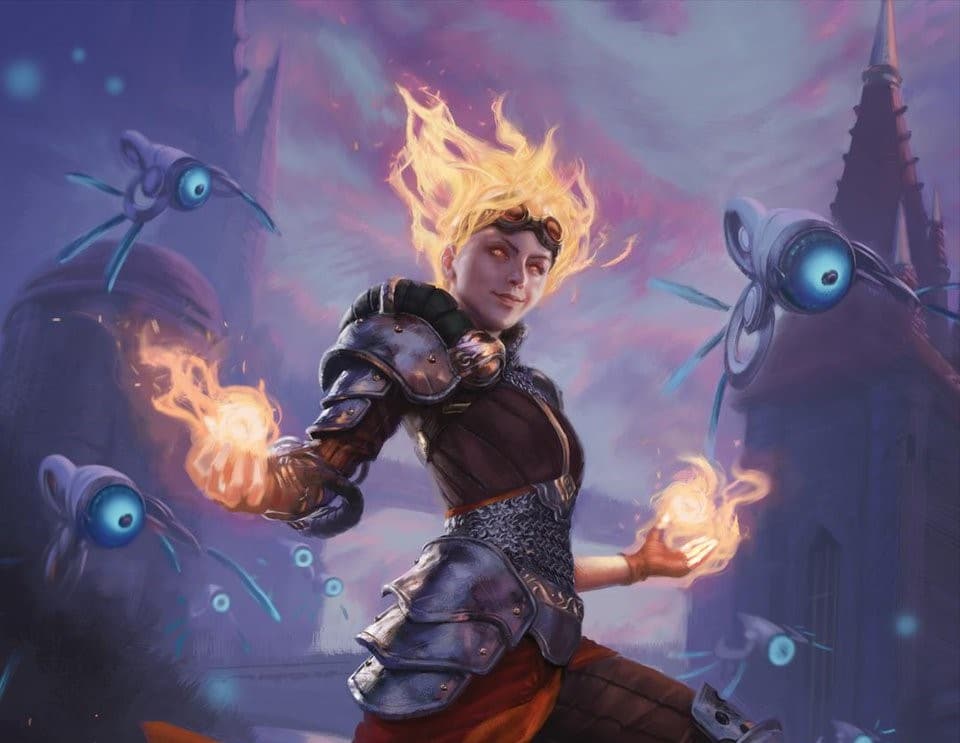 Red is a weird color when discussing card draw. Most of the card advantage that red offers aren’t drawing cards. The more common mechanic for red is to exile cards, allowing you to play them for a limited time. Since this is (sort of) red’s version of card draw, effects like this (and more) will be considered when creating this list. If we did not allow this, then this MTG best red card draw list wouldn’t be helpful to anyone.

Like other lists written in this manner so far, only mono-red cards will be considered. Generally, red card advantage concerns EDH more than other formats, so this list will be geared towards getting value there. As an unexpected bonus, many cards on this list are very budget-friendly.

Thrill of Possibility is a two-mana instant that allows you to discard one card while drawing two more. At instant speed, the card is excellent in decks that want to quickly get cards into the graveyard while keeping their hand size the same. Financially, it’s very inexpensive. This is likely a reason why Thrill of Possibility sees so much play. This card is an honorable mention because, frankly, there are much better cards out there.

Coming in for only three mana, Chandra, Dressed to Kill is a versatile Planeswalker that offers an extra card on each turn. Unfortunately, the card must be red, making this pick much better in mono-red decks. Chandra quickly becomes a win condition when ignored. This offers an additional layer of complexity when facing down a Chandra, Dressed to Kill. Chandra remains an honorable mention because of its drawback of only caring about red cards.

Need to dump a ton of mana into one card? I present Commune with Lava! This card is significantly worse in fast formats, but in a grindy format like casual Commander, Commune with Lava can easily find you eight to ten cards. Sadly, you will likely be unable to play them all. This leaves Commune with Lava at the bottom of this list.

For players on a budget, Commune with Lava is very inexpensive.

Outpost Siege has been a premier card advantage option for red decks in Commander for a long time. Since its release, power creep has left the card out scaled by bigger and better things. Regardless, when you choose Khans, Outpost Siege offers its players an extra card that they can play every turn from exile. Think of it as a clunky Phyrexian Arena.

Outpost Siege has another option if you don’t need a card advantage. Since the Dragons mode only cares about creatures leaving the battlefield instead of dying, some sneaky flicker and ninjitsu tactics can make Outpost Siege better than average.

Like the previous offering, Outpost Siege is very inexpensive.

Sunbird’s Invocation offers pure card advantage. This card cares about you casting big mana cost spells. When you do, you get to look at cards off the top of your deck equal to the casting cost of whatever you’re playing and cast something else from among those for free; as long as the card costs less or equal to whatever the original card did. The drawback is that you need to cast cards to get more cards, and Sunbird’s Invocation is extremely expensive at six mana.

For a long time, Sunbird’s Invocation carried a price tag on the secondary market. Due to reprints and power creep, this is now another great budget option.

Chandra, Torch of Defiance is very similar to Outpost Siege. Both cards allow you to exile a card that you may play. Chandra doesn’t let you play lands this way but will enable you to leave those cards in exile in exchange for two damage. Chandra’s other modes are far better than Outpost Siege’s, which ranks it higher on this list.

If your problem is getting cards out of your hand instead of drawing them, Chandra can help by adding two red mana. Chandra can also be used as an emergency removal option and doubles as a win condition if ignored for too long. Of course, you could play Chandra with something like Doubling Season and activate its ultimate immediately. Better end the game quickly if you do that.

MTG players may not think of Ragavan much outside of Modern. Unfortunately for your wallets, Ragavan is among the best red card advantage options in EDH. A turn one Ragavan offers both ramp and potential card advantage off of whatever player it hits. If you don’t find it early in the game, you can choose to Dash Ragavan instead to get instant value in some shape.

Ragavan is held back in EDH a bit when compared to Modern. The cards Ragavan finds will typically be harder to cast in early turns, making the card advantage version of Ragavan iffy. CEDH also has a lot of counterspells, which Ragavan can’t typically cast. Conversely, hitting a Sol Ring will give you an unfair advantage.

Valakut Exploration isn’t the card you’re looking for if you’re playing a deck that doesn’t want to drop a land every turn. Most Commander decks go rather late, so Valakut Exploration is a great option most of the time. Landfall decks that care about making multiple land drops can get a ton of advantage from Valakut Exploration. If you can’t use all the cards you exiled by the end of the turn, you can turn it into damage to pressure an opponent.

Wheel of Misfortune introduces a minigame for the table that’s very easy to miscommunicate. Each player secretly chooses a number (write it down on a piece of paper or something). When you all reveal what you selected, the lowest number does nothing. All of the other numbers get to discard their hands and draw seven new cards. The highest number takes damage equal to their number. In the case of ties, every player who picked the highest number will take damage, and every player who picked the lowest number will do nothing. If Commander politics somehow leave the table all choosing the same number, everyone takes damage, and nobody draws new cards. It’s a lot of trouble for those who want to draw seven new cards. Regardless, it’s still one of red’s best options for card advantage.

Some players will use Wheel of Misfortune for reasons other than card advantage. If you have a card that turns effect damage into life gain like Intervention Pact or Samite Ministration, you can pick an absurd number like ten trillion and gain that much life. For this amount of absurdity, Wheel of Misfortune is also budget-friendly.

Faithless Looting isn’t offering its caster any more cards than they already have access to… unless they care about their graveyard. If you’re not a graveyard deck, Faithless Looting becomes significantly worse. At its worst, it still offers you a good amount of card selection for a low cost. Remember that you can also Flashback Faithless Looting to draw and discard two cards a second time.

At its best, Faithless Looting dumps precious value into your graveyard for you to reanimate at your will. Running other Flashback spells is also a fantastic way to get value from your Faithless Looting. Since it’s incredibly powerful when in top shape, Faithless Looting scores a high spot on this list. You can find this card for less than a dollar at most locations.

When writing this list, I didn’t think Wheel of Fortune would be at the number three spot. This is a Reserve List occupant that demands that the table discard their hand and draw a new seven. This is the OG ‘Wheel’ effect, hence giving that collection of spells its name.

To be clear, ‘Wheel’ cards are anything that make the player discard their hand to draw new cards. Typically, the cards drawn will match whatever was in their hand. Wheel of Fortune is superior to those effects since it allows players to draw a full seven.

If you decide to play Wheel of Fortune with effects like Narset, Parter of Veils that prevent opponents from refilling their hand, this card arguably jumps to the top of the list. This is a quick way to win a game… It’s a faster way to make a table of casual players go home.

The only surprise about this card is that it’s not in the number one spot on our MTG best red card draw list. Jeska’s Will quickly rose to popularity after being featured on an episode of Game Knights. You need your Commander on board to take full advantage of Jeska’s Will, but the payoff far outweighs the requirement. Generally, Jeska’s Will produces seven red mana and exiles three cards for you to play. Since Jeska’s Will only costs three mana, you will have additional resources to deploy the cards you exiled before they disappear. Because this card produces both card advantage and means to cast them, Jeska’s will can grant more ‘advantage’ than cards above it on this list.

Jeska’s Will becomes truly degenerate when you start to recur it, copy it, or find other ways to play multiple copies of it in a turn. Because Jeska’s Will commonly produces enough mana to recast itself, all you need is a way to recast it. Underworld Breach is a quick way to recur this card repeatedly, exiling your entire deck and winning the game with the absurd amount of mana you’ve generated. If you want an EDH deck that abuses this to its full potential, we wrote a guide on it. Anyway, while we’re talking about Underworld Breach:

Ok, so TECHNICALLY, Underworld Breach isn’t card advantage. While that may be the case, Underworld Breach offers players to cast an absurd number of spells from their graveyard that typically finds the player more cards. In every format Underworld Breach is legal; it’s capable of ending games as early as turn two because of how absurd the value can get, as long as you build in ways to break it. Sometimes casting an Underworld Breach will amount to nothing, but more often than not, it will give you access to more cards than a piece of card draw ever could. If you choose to play this card, veteran players will throw everything they have at you to stop Breach from resolving, so keep that in mind.