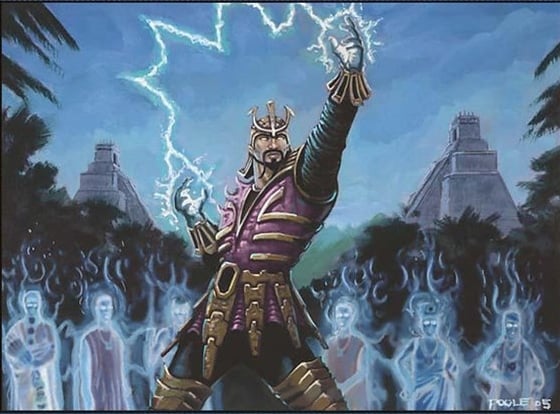 Welcome to one of the most debatable topics in the entirety of MTG. Blue is the color that is the most complained about in the game, and for good reason. It stops opponent’s cards, and finds you more cards! If you don’t know what draw cards you should be sleeving up, here’s the top 10 MTG Best Blue Card Draw to help you out.

These guys are absolutely absurd in Commander, usually allowing for an endless amount of card draw. The reason why they are honorable mentions on this list is because they are absolutely terrible in two player formats. A lot of the time, because of the restrictions that these cards have, your opponent will play around them and not let you get any value. They, therefore, essentially do nothing in a two player game.

The cards above Memory Deluge on this list are significantly stronger then it. This card, as a result, could be replaced with a good number of other MTG cards.

Buy At TCGPlayer
Thoughtcast needs a certain type of deck to shine. When you play in a deck with a bunch of artifacts, it essentially only costs one mana to draw two cards. Its not fantastic outside of that, but if you can play it for at most two mana, it is usually worth the investment. This card has made waves in competitive MTG, winning major tournaments.

Because you need to invest your whole deck to make Thoughtcast work, it is only number nine on Mtg best blue card draw list. If you do invest in it, however, it is more powerful then some of the cards above it.

Thoughtcast is legal in Modern, Vintage, Legacy, Commander and Pauper.

Buy At TCGPlayer
Jace, the Mind Sculptor is a rather unique card on the list. It is a Planeswalker that can consistently draw cards on every turn. On top of that, it has a lot of versatility. Even when you do decide to draw cards, you get some selection alongside it. This is a bit weaker then the cards higher on this list primarily because of its mana cost. If you want to play Jace, its a considerable investment compared to everything above it on this list. In most cases, you can only play it at Sorcery speed as well, meaning that the investment is larger then it looks.

Jace can also get targeted by what your opponent’s doing, drastically reducing the value it creates. Don’t get me wrong, this card is strong. If your opponent doesn’t answer it, Jace, the Mind Sculptor is easily capable of ending the game on its own.

Jace, the Mind Sculptor is legal in Legacy, Modern, Commander and Vintage.

Buy At TCGPlayer
Archmage’s Charm‘s power comes from its versatility. The mana cost can be rather brutal, but the card is worth it. In most cases, this will either act to stop a problematic card that your opponent plays, or draw you more cards. You can play it at instant speed, meaning that the investment for this card is smaller then those above it on this list. The investment is further minimized by its ability to play double duty. No matter what you are required to do on your turn, Archmage’s Charm can do it. The cards above Archmage’s Charm on this list are drawing cards for a better rate then Archmage’s Charm is. Archmage’s Charm is legal in Vintage, Legacy, Modern, Historic and Commander.

There’s a bit of a power gap from this point on in comparison from the rest of the mtg best blue card draw list. Gush is a bit of a strange card on this list. It’s the only card that you can cast for free, but the cost to do so can be quite large. You can bounce two Islands instead of paying its mana cost. This can synergize extremely well with Mystic Sanctuary. Mystic Sanctuary can re-enter the battlefield and put your Gush back on top of your deck. This allows you to keep drawing cards, and leaves other mana open to interact with your opponent.

This card is particularly problematic with Brainstorm. You can essentially bounce two lands to your hand to cast Gush for free, then Brainstorm to draw three more and put the lands on top of your deck. Follow it up with some kind of shuffling effect to get rid of them. Interactions like this led Gush to be banned in a whole bunch of formats. Considering its history, there is a definite argument to having this card higher on the list. Because you need to build around Gush to some extent, its only number six. In a situation where you do build around Gush to its full potential, this would take the number two spot. Free MTG cards will always be an issue.

Gush may seem weak at first, but its only legal in Commander and Restricted in Vintage. It is banned in every other format. This speaks to how powerful Gush becomes when you build around it.

Buy At TCGPlayer
Treasure Cruise offers an excellent rate for drawing cards. It may not look like it at first glance, but Treasure Cruise has Delve. This allows for you to pay generic costs on Treasure Cruise by exiling cards in your graveyard instead of paying mana. This can essentially turn into a one mana spell that lets you draw three cards.

There are a lot of decks that can fill graveyards very quickly. This card is a lot easier to play for one than you might think. You can build around Treasure Cruise to make it more efficient, but it’s good in just about anything that actually plays its cards on curve.

Treasure Cruise is legal in Pioneer, Commander and is restricted in Vintage.

Another Delve card, Dig Through Time is essentially a better Treasure Cruise for a slightly higher cost. You will only be finding two cards with Dig Through Time, but you get to see a lot more cards in exchange. Look at the top seven cards and choose two of them to keep.

Dig Through Time excels in combo decks where your goal is to find certain cards. It’s rather common for an opponent to Dig Through Time at the end of your turn and win the game when they untap. Be on high alert whenever you see this card resolve. Dig Through Time is legal in Pioneer, Commander and is restricted in Vintage.

READ MORE: This is One of the Most BUSTED Token Commanders Ever

Another card that draws three and only costs one, Brainstorm is a strictly worse version of our number one card, but its still powerful enough to take the number three spot. Honestly, this and number two are probably interchangeable. While this card essentially only draws one card, you can use the extra cards drawn to fix the top of your deck. This sometimes can result in you getting stuck for a few turns if you need an extra land that you know isn’t coming.

Brainstorm is played alongside a lot of cards that can affect the top of your deck. Use Fetch lands like Flooded Strand to shuffle your deck, getting rid of whatever two cards you put back with Brainstorm. You can also use scry effects to get rid of cards on the top of your deck that you don’t want after a Brainstorm. This is only one mana, meaning that creating small combos with this card, like the ones listed, are very cost efficient. Brainstorm is really cheap to buy as well. As long as you have a way ton shuffle your deck, this card is incredibly powerful. As mentioned before, this card becomes extremely problematic when coupled with cards like Gush. However, for Brainstorm to truly shine, you need some kind of combination of cards for it to be really good. For that reason, it is number three on this list. Brainstorm is legal in Legacy, Commander, Pauper and is Restricted in Vintage.

A theme can be found near the top of the MTG best blue card draw list. Everything is super cheap to cast, and offers some form of selection. This means that all of these cards do something more than just drawing one card for a very cheap cost. Enter Ponder, a one mana spell that lets you look at three cards, rearrange them in any order, then draw one. You can also choose to shuffle your library if you don’t like what you see. This is the big perk that Ponder has over Brainstorm as a single card. You don’t need other effects to deal with Ponder‘s downsides. Brainstorm does have more potential when combined with other cards though. This makes these cards very close in power level. If we are ranking each card solely for what it does and not for outside factors, I believe Ponder is a little bit better.

Ponder is another card that you can find for quite cheap. If you’re interested in having some premium blue cardboard, Ponders can also go for hundreds of dollars depending on the version. Ponder is legal in Legacy, Pauper, Commander and is Restricted in Vintage.

Any list that’s considering all the mtg best blue card draw in the game that doesn’t have this as the best one is just plain wrong. Ancestral Recall was released in Alpha, MTG’s first set ever. It’s part of the Power Nine, a prestigious group of nine cards that are widely considered to be the best cards in the game. You simply won’t find a better rate than drawing three cards for one mana. This is partially because of how powerful it is, but also partially because Wizards can’t print better card draw than this. This card is also part of the Reserved List. This means that there won’t be any copies of Ancestral Recall printed ever, and nothing that is printed can be a stronger version of what this card does. Because of this, the card retails for thousands of dollars.

This card is only legal in Vintage and is Restricted, meaning that you won’t run into it in a typical game of MTG.