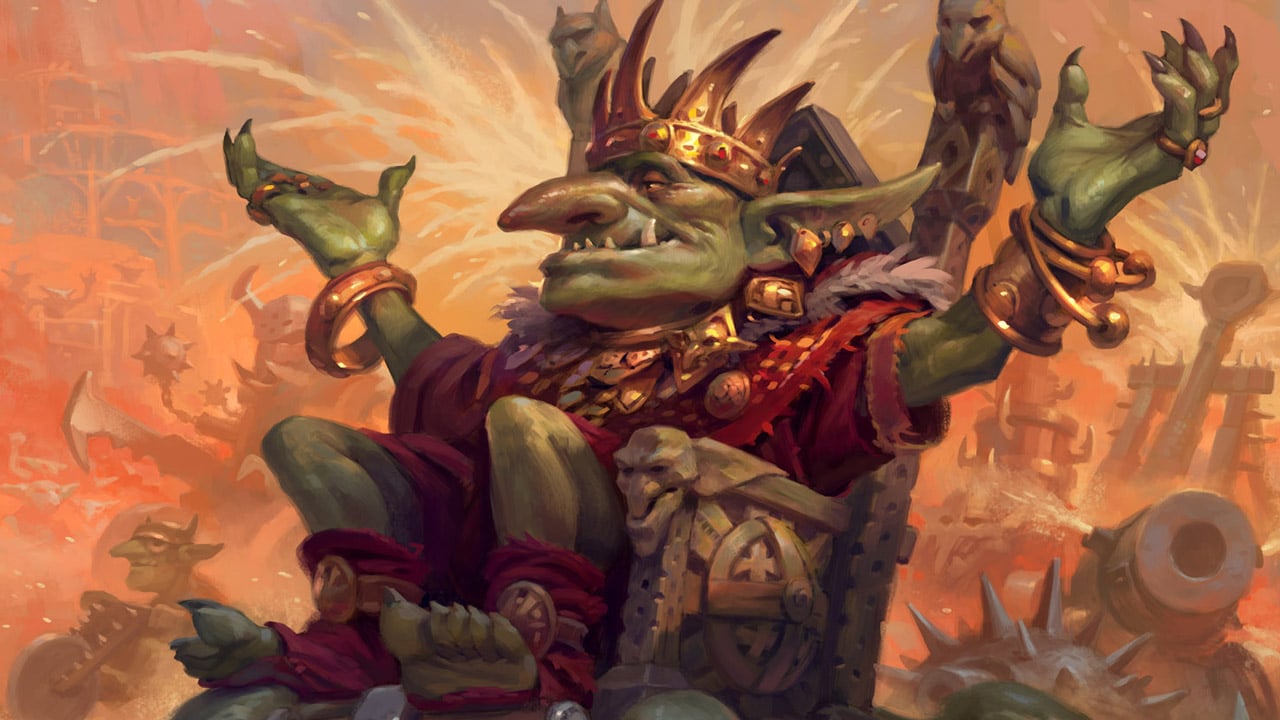 The Best 10 Goblins in Commander

Throughout Magic: The Gathering‘s long history, Goblins have been one of the most consistent tribes. On each plane they demonstrate different levels of intellect and cunning – but the one thing they all have in common is the color red. You’ll usually see Goblins in either Mono-Red or Rakdos colors in Commander.

Plus, you’ll always see new Goblin cards in future sets since the tribe is so popular. With that, let’s whittle down some of the best Goblins in the format.

While Goblin Matron may do much on her own given the 1/1 body, she’s the lynchpin in any goblin tribal strategy. Goblin Matron is a solid tutor effect in Mono-Red, ensuring you get the right goblin for your exact situation. It pairs well with powerful goblins such as Kiki-Jiki, Mirror Breaker, and Conspicuous Snoop for that combo potential. Then once you have resolved Goblin Matron, she makes great sacrifice fodder in the late game.

You do have to reveal the Goblin you find off Goblin Matron, but the ability to grab what you need is too good to pass up.

Guttersnipe is a classic example of a card that receives a huge boost in a multiplayer setting such as Commander. As Guttersnipe has the all-important ‘each opponent’ clause, you can deal a lot of damage if you pack enough instant and sorceries. If you can fuel Guttersnipe, the damage it deals will very quickly add up and is a great way of ticking down the life totals of all of your opponents at once.

The Goblin Shaman may not fall into a tribal Goblin strategy since you want to pack your deck with creatures. But if you are looking to go into Izzet for Melek, Izzet Paragon, or Boros for Feather, the Redeemed then Guttersnipe is the ideal option for you.

We’re cheating with this one, but both cards are excellent within a Goblin-focused Commander deck. Siege-Gang Commander is one of the best token generators in the tribe as it offers four bodies straight away. Although the sacrifice cost is a little steep, you are able to direct this damage to opponents or their planeswalkers. Then, you have Sling-Gang Lieutenant from Modern Horizons which pack lifegain if you want to preserve your life total.

Siege-Gang Commander is one of the best cards you can run in a Goblin-focused Commander deck. It creates bodies, a built-in sacrifice effect, and helps you make goblins from a Krenko, Mob Boss. Plus, who doesn’t want to throw goblins at the opponent’s face?

Perhaps one of the most iconic Goblin sacrifice outlets in all of Magic: The Gathering, Skirk Prospector converts your Goblins into red mana.

With enough Goblins, Skirk Prospector can ramp you into some explosive turns. Especially if you have access to powerful ‘X’ spell cards such as Banefire or the on-flavor Empty the Warrens, you can have some really explosive turns. At worst, Skirk Prospector can allow you to ramp into your three or four drops if you are struggling to hit lands. At best, the Goblin can threaten to provide the fuel to burn your opponents right out of the game before they even know what’s hitting them.

Although Goblin Trashmaster is a little expensive on the mana, its abilities are worthwhile in a game of Commander. The format is defined on mana rocks and other powerful artifacts which makes Goblin Trashmaster a strong option within a Goblin tribal strategy.

Also, the Goblin Warrior pumps every other goblin you control which is just the cherry on top of an already powerful, yet repeatable effect. Keeping Trashmaster supplied with Goblins should be easy enough, and it can threaten your opponent’s efforts to ramp at any point during the game. You can choose to use Trashmaster reactively by sacrificing itself to remove an artifact in response to your opponent’s removal spell.

What is better than blowing artifacts? Taking them for yourself!

Treasure Nabber truly has a home in Commander where you are guaranteed opportunities to use its ability. If you can couple this card with any artifact sacrifice effect, you can shut your opponents out of their mana ramp completely until they’re able to remove the Goblin Rogue. This is the kind of card you want in a red aggressive Commander deck as it slows down your opponent’s ramps while giving you an advantage with your cheap cards.

Going further, you can pair this with Kuldotha Rebirth to covert your opponent’s mana rocks into goblin token fodder for your Goblin sacrifice effects. Trading Post ensures you can turn those stolen artifacts straight into card draw. Then, you can add either Goblin Welder or Goblin Engineer to get your artifacts into play from your graveyard.

Kiki-Jiki, Mirror Breaker can do some really absurd things in Commander. Despite coming in at five mana, Kiki-Jiki has the ability to create copies of any other creature in your deck, give that creature haste which is incredibly powerful.

While you’ll want to run Kiki-Jiki in a Goblin deck, the Goblin Shaman is best in a deck that can take advantage of his activated ability. Kiki-Jiki is notorious for being part of two-card combos that can flood the board with infinite (and hasty) threats. Going further, running creatures such as Restoration Angel, Felidar Guardian, and Corridor Monitor will give you ample ways to end the game. If you can find any of these cards, that makes Kiki-Jiki a game-ending threat that needs to be answered or disrupted immediately. Preferably before it can even hit the table.

Perhaps one of the most impactful Commander cards in recent times, Dockside Extortionist is a staple in any Red Commmander strategy. The ability to ramp you up instantly is sorely needed in a Mono-Red Commander deck, especially when you want to play either Krenko, Mob Boss, or Muxus, Goblin Grandee ahead of schedule. You’re always going to create Treasures since artifacts and enchantments play a huge role in the Commander format. You can generate even more value when copying Dockside Extortionist with a Kiki-Jiki, Mirror Breaker.

Additionally, it allows you to catch up if you are stumbling on mana in the early stages of the game. All in all, Dockside Extortionist is one of the best Goblin cards you can run in the ninety-nine of your Commander deck.

Krenko, Mob Boss is often the default Commander when it comes to Goblins since it can get out of control very quickly. As you are able to generate a board of Goblins, Krenko’s ability will only become more powerful as the game progresses. Even by having a Siege-Gang Commander in play, you are able to create five Goblin tokens with no mana investment. If your opponents are unable to answer Krenko in a timely matter, you will be able to double the number of Goblins created allowing you to take over a game of Commander.

Pairing this with Purphoros, God of the Forge, or Impact Tremors, you are well on your way to victory even if you are unable to attack with your swarm of Goblins. Even if you have literally no board, Krenko can build up an army surprisingly quickly all on his own. He will always be a threat and will demand an answer every game.

Coming from Jump Start, Muxus, Goblin Grandee is one of the most powerful Goblin cards you can play in Commander. When it enters the battlefield, you look at the top six cards of your library and put all Goblin cards that cost five mana or less into play. This is an incredible ability that is sure to turn the tide in a game of Commander.

Although Muxus is a little on the expensive side in terms of mana value, there are ways to cheat the Goblin Noble with cards such as Skirk Prospector. Even then, you can run mana rocks such as Sol Ring, and Arcane Signet to cast Muxus ahead of schedule. The second ability may not come up often, but it allows you to push through Commander damage or to utilize a voltron approach instead. Either way, Muxus, Goblin Grandee is fantastic at the helm of a Goblin Commander deck and allows you to refill the board after a board wipe.