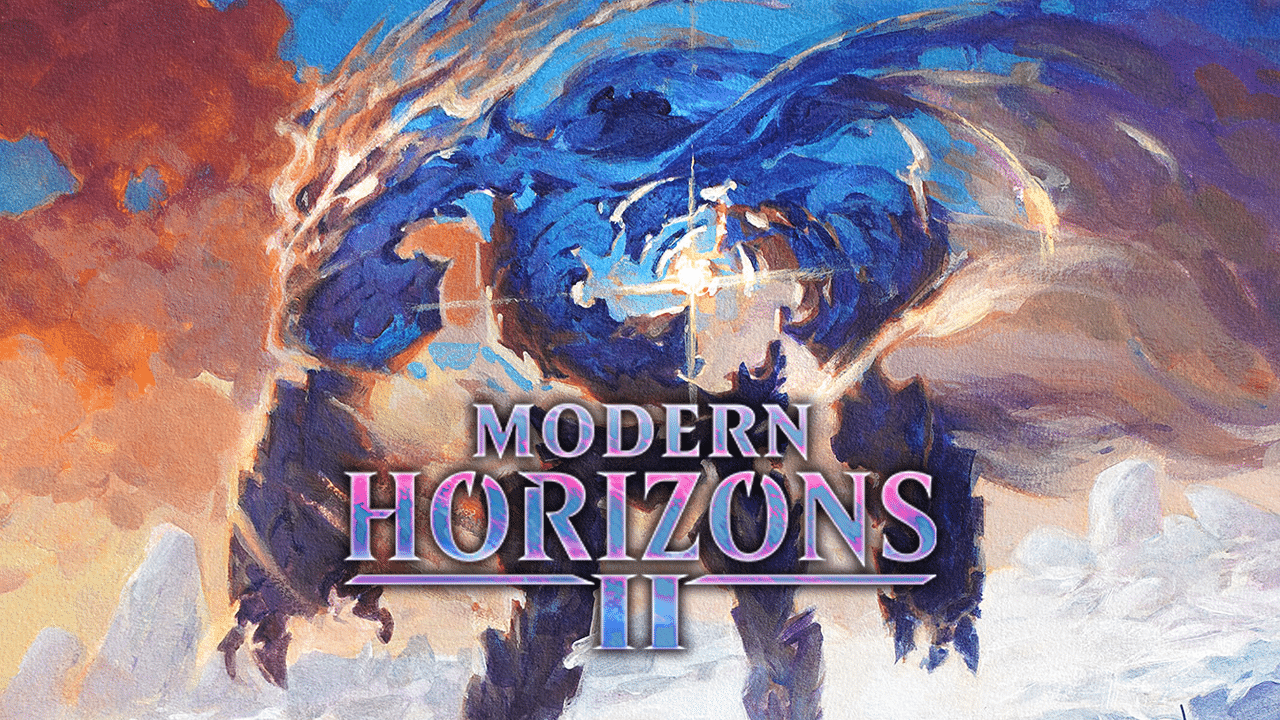 Released back in May, Modern Horizons 2 is reshaping the Modern format in new and exciting ways. Even months after release, the overall value of the set is high and doesn’t look to stop anytime soon.

Modern Horizons 2 is the second offering from the Modern Horizon series which looks to add cards to the Modern format. Often you see reprints, and new-to-Modern cards to refresh the format to avoid it becoming stale. As such, it’s never a bad time to pick up Modern Horizons 2 products since the ceiling is so high. Not only for Modern but there are also plenty of cards that crop up in Commander too.

Either way, there is something for everyone within this desirable set, even months after release.

Sword of Hearth and Home

In Modern Horizons 1, we saw a return of the sword cycle with Sword of Sinew and Steel, and Sword of Truth of Justice. Modern Horizons 2 keeps this trend with Sword of Hearth and Home. Falling into Selesnya colors, this Sword offers ramp and to ‘blink’ one of your creatures. For Commander, this offers ramp in colors that aren’t able to do this so easily – especially in White, Blue or Red.

In terms of Modern, the Sword is added to the already impressive Stoneforge Mystic suite. Despite it not seeing much play in Modern at present, it’s a nifty tool to have access to against Heliod Company, or White-heavy strategies. As such, expect Sword of Hearth and Home to maintain a modest price due to its multi-format application.

Speaking of White, Esper Sentinel is one of the most impressive White creature cards we have seen in some time. For one mana, you have the ability to prevent an opponent from casting a second noncreature spell if they don’t pay the costs. Think of Esper Sentinel as a White version of the powerful Rhystic Study. With that, the Human Solider sees plenty of play in Commander as it provides card draw in a color that struggles with it.

For Modern, the Artifact Creature sees play in Mono-White Hammer since it offers free card draw and a low-curve threat. Even then, it crops up in Human tribal lists since they’re already heavy on the White. If you play Commander, you can never have enough Esper Sentinels and with that, expect the price to rise over time.

During Modern Horizons 2 preview season, Grief saw plenty of discourse as you can Evoke the creature and then cast Ephemerate. Even with the rebound from Ephemerate, you can make your opponent discard two cards as early as turn two. Which is enough to frustrate some players, and not forgetting the 3/2 menace body too.

The Elemental Incarnation doesn’t see any play in Commander but does crop up in Legacy once in a while. Given the unique design of this cycle, expect to see these cards keep their value. It may take a new card to break this design further, so it’s worth keeping a handful to save money further.

Expanding on the Evoke cycle, Solitude is a powerful option for Control-based strategies in Modern. It’s not quite Swords to Plowshares, but it does bring a 3/2 lifelink body to the table.

Unlike Grief, Solitude is great in White-heavy Commander decks as it’s a second copy of Sword to Plowshares. Also, you have options to blink this with cards such as Ephemerate for additional value. Like Grief, it’s a powerful card that can only become more effective with more cards coming into print.

Over the years, Modern has seen many flavors of Izzet with Blue Moon, Prowess, and Phoenix all having some representation in the format at various points. With the printing of Murktide Regent, it’s opened up doors for Izzet in Modern and Legacy.

As such, Izzet Murktide is one of the best strategies in Modern at present. Coupled with cards such as Ragavan, Nimble Pilferer and Dragon’s Rage Channeler, you have a versatile set of threats. Followed with cheap spells such as Lightning Bolt and Expressive Iteration, you have various ways to discount Murktide Regent. Even in Legacy, you can pitch the Dragon to Force of Will which is desirable in the format. It’s going to be a long time until we see a creature like Murktide Regent again, so grab these if you want to play spell-based strategies going forward

Originally printed in Torment, Cabal Coffers is one of the most popular cards in Commander. This is due to its combination with Urborg, Tomb of Yawgmoth in heavy-Black Commander lists.

Even at Mythic, the land has dropped in price considerably which means players can pick up this card more affordably. However, this price won’t stay this low as Modern Horizons 2 product will eventually dry up, in conjunction with the demand from Commander players. Once again, you can never have too many Cabal Coffers if you are only playing Commander, despite it having no place in Modern at present.

Like Grief, Urza’s Saga saw plenty of discussions when it was initially previewed. It’s seeing play in Modern in dedicated artifact strategies, Mono-Green Tron, and Amulet Titan. When Modern Horizons 2 dropped, there was plenty of concern about the power of Urza’s Saga and whether it should be banned in the format. There may be a consistency issue, but Modern often adjusts to trends in the metagame. With this, Urza’s Saga is seeing less play, but remains a powerful option in the format.

Even if there is a world where the card is banned, Urza’s Saga is an excellent option for Commander since it can find a Sol Ring, or any other one mana value artifact you may need. Given how unique the card is, the price may go up especially if newer artifacts come into print.

Carrying on with the Evoke cycle, Endurance became underlooked during Modern Horizons 2 due to the hype of Grief and Solitude. However, the Elemental Incarnation is seeing play in Modern and Legacy since it’s fantastic against graveyard strategies such as Dredge.

What makes it so good is that it’s cheap graveyard interaction, however, it won’t see play in Commander as it’s so linear. With that, this is a good time to pick up Endurance as it will become a Modern staple. We have seen this previously with cards such as Force of Vigor from Modern Horizons 1 which are creeping up in price, so expect similar here.

Read More: Top 10 MTG Side Board Cards In Historic From Adventures in the Forgotten Realms

Fetch lands are the backbone of most strategies in Modern. They allow deck filtering, smoothing out mana bases with shock lands and triomes, but they come at a price.

Due to the demand for fetches and the handful of printings in Modern Masters 2017 and Zendikar, the price became unattainable for a lot of players. Extending outside of Modern, this land cycle sees play in Legacy, Vintage, and Commander. With the release of Modern Horizons 2, the price of the enemy fetches is dropping into an affordable range. Thanks to the extended and retro frames, there are many copies of the card to acquire. But, there will come a point where that supply will dry up and demand won’t be met.

With this, if you are after fetches – grab them now. This is one of the best opportunities to pick up these fetches, or keep them if you open them in Draft, Set, or Collector Boosters.

Read More: Should Birthing Pod be Unbanned in Modern?

Unsurprisingly, one of the most expensive cards in Modern Horizons 2 is one of the most powerful. Ragavan, Nimble Pilferer is one of the best Red cards ever printed and sees play in Modern and Legacy. In terms of Modern, it’s in Jeskai Stoneblade, Rakdos Midrange, and even in Izzet builds. It does so much for one mana value, and the price will continue to rise.

If anything, the card could do with a reprint in a Secret Lair or a future Masters set. If you open a Ragavan, it’s best to flip it unless you want to play that kind of strategy in Modern. It’s better to sell the card to get more cards you are after rather than sitting on it. Even then, you’d want to run the complete set of Ragavan which is a tall order at present.