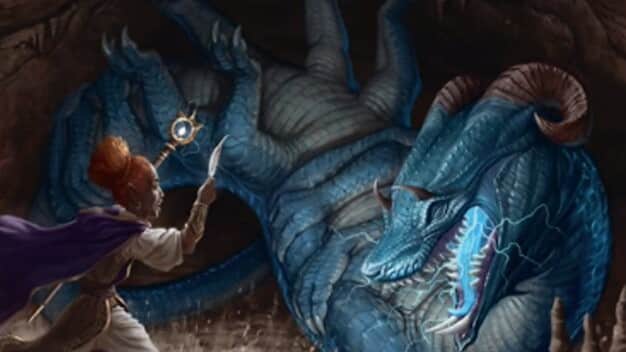 While there are a lot of sets every year in MTG, it’s not often we get something as ground-breaking or exciting as a full crossover.

Well, Adventures in the Forgotten Realms is a mix-up of Dungeons & Dragons and Magic: The Gathering, and our excitement for it has grown with every single card revealed. However, one, in particular, has really caught our eye, and it just so happens to be one of the most exciting mill cards we’ve ever seen.

Try to contain yourself

That’s a tricky thing to replicate in MTG, because without introduce a laughter mechanic, or maybe causing something to stop untapping, you can’t really simulate it. Well, thankfully for all of us, the people who designed this card understand a primal fact; mill is funny as all hell.

Sure, beating your opponent to death is good and all, but nothing puts a smile on your face like milling someone out and watching all of their precious spells, and their hope, slowly find its way into their graveyard instead of their hand. It’s a true delight, and we’re oh so glad that THL is a mill spell.

A man walks into a bar…

Tasha’s Hideous Laughter is a three mana Blue Sorcery that reads, “Each opponent exiles cards from the top of their library until that player has exiled cards with total mana value 20 or more.”

In short, you’re probably going to get a fair few cards for a very low price. Mill often struggles against decks that specialise in killing you quickly. However, Tasha’s Hideous Laughter is a natural counterattack to those strategies, because they usually have a very low mana curve.

Let’s say, for example, that you’re against a burn player. Let’s say, in fact, that you’re up against this Burn deck, which has an average mana value in the main deck of 1.0667. On average, you will hit 19 cards every time you cast Tasha’s Hideous Laughter. Even assuming you’ve not done any other milling before this cast, your opponent will be left with half their deck left after a single cast of this incredible card.

Assuming you can get off even a single [tooltips]Archive Trap or even just have a Hedron Crab or Ruin Crab down for a couple of turns, you’re opponent should be nearly out of cards, if not completely out of them. It’s an astoundingly powerful effect, and it is, ultimately, very funny.

It’s not just good against decks with low mana curves either, although it’s at its best there. Even against more powerful decks, you’re still going to get a few good cards because control decks are more likely to have more Land cards, and that means you’ve got more chance of milling a card without affecting the overall total mana value milled.

It’s not often we get a truly powerful new toy for all of the mill players out there, and we know we weren’t expecting to see one in the D&D focussed set, but we’re ecstatic to have this on the way. Also, in case you were wondering, the punchline to our second heading is “ouch”. We don’t expect that’s got you rolling around on the floor holding your sides, but we bet it got a hearty groan out of you, and to us, that’s just as good.