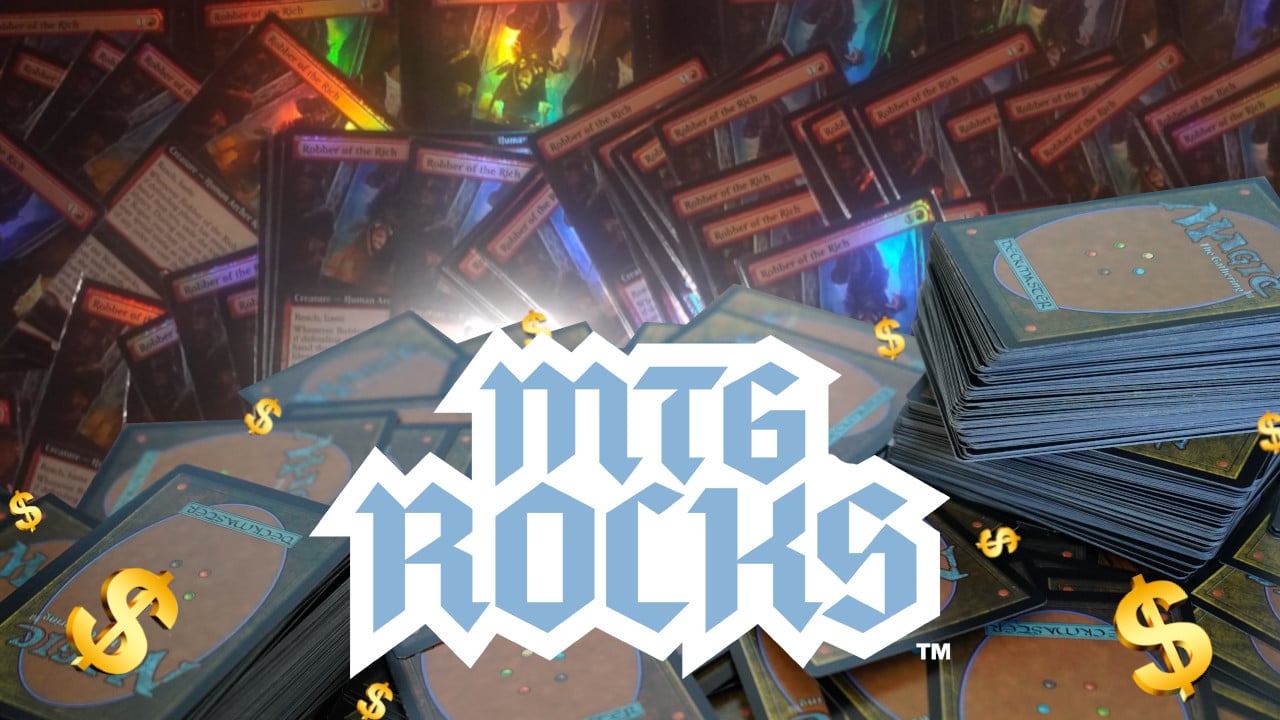 This week, Redditors show off their impressive investments of a 5-color Shrine enchantment, a Throne of Eldraine extended art foil, and an old but versatile modal spell.

Welcome to Risk and Reward, where we cover interesting MTG investments from www.reddit.com/r/mtgfinance. Some investments have massive payoffs. Some are just for fun. And not all investments are winners. I interview each investor to find out more about why they speculated on their particular card.

*WARNING* You’re about to see giant stockpiles of cardboard.

Sanctum of All is the ultimate Shrine card that ties together every other Shrine. Shrines are a type of Legendary Enchantment that was introduced in the original Kamigawa block. We’re returning to Kamigawa next year, so there’s a chance we’ll get more Shrine support.

Why did you choose to invest in Sanctum of All?

“Wizards of the Coast has already shown that they are willing to print more shrines since the original Kamigawa sets. There are currently only 2 different shrines per color. I personally hope WOTC prints another cycle of Shrines. And I feel there is a decent chance they will in Kamigawa: Neon Dynasty.”

“If this card ends up rising in price, the main reason would be Commander. Even if the Shrine decks aren’t very good, there will still be casual demand for a shrine Commander deck that will guarantee the rise in price for this card.”

“I have 217 regular non-foil copies of this card and I’m not really looking to purchase anymore.”

Approximately, how much did you spend on each copy of Sanctum of All? What value do you expect them to reach and why? And at what value, would you consider selling your position?

“My average cost basis for Sanctum of All has been approximately $0.67. I expect them to reach about $6.00 and I will begin selling out of my position at $3.00.”

Do you have any advice when it comes to speculating on Magic: the Gathering cards?

“The first thing you need to make a profit in MTG specs is a means of selling your cards once they gain value. And you’ll have to be able to move quickly, selling between 20-50 copies of a card in a week’s time.”

“That’s why I’ve been running an eBay store for about 5 years now. I have probably 100 more specs that I’m slowly selling, over half of which have increased in value, netting me an overall profit.”

“I’m in the process of writing a book that talks about how you can start buying cards and collections, buying specs, and how to retain an overall profit in the process. Investing in Magic cards is like a fun game to me. I look forward to sharing the knowledge I’ve earned throughout my many years of investing.”

Robber of the Rich – u/foldedcardboard

Robber of the Rich was a staple of Mono-Red Aggro decks during its time in Standard. Since then, it still pops up in Commander decks like Prosper, Tomb-Bound and Ragavan, Nimble Pilferer.

Why did you choose to invest in Robber of the Rich?

“I began investing in Robber of the Rich more or less as a way to gauge the supply of Throne of Eldraine extended art foil mythics. In addition, a 2 mana 2/2 creature with haste and an interesting ability that can create card advantage doesn’t seem awful by any means. Ragavan, Nimble Pilferer is effectively a better version of Robber of the Rich, but at the time I was buying them we didn’t have the monkey.”

“Currently, I think I own 123 foil extended art copies. It’s been a slow process in obtaining that many, which I started shortly after the release of Theros Beyond Death.”

“Initially, the goal was to get 100 copies. This took me quite a while to do, as several times in the process, I bought so many copies that the supply of all big card retailers dropped to less than 10 copies. I’d have to then wait for the supply to come back to the market and the price to level back out.”

“As far as how many copies I want, I don’t really know… I’m not sure I have a plan anymore. I have grown pretty attached to the collection so at this point I’ll probably just keep an eye on the price, and if it gets into a price range that I feel comfortable adding to the stack I’ll start adding again.”

Approximately, how much did you spend on each copy of Robber of the Rich? What value do you expect them to reach and why? And at what value, would you consider selling your position?

“I had an average cost basis around 22 dollars per Robber of the Rich foil extended art.”

Orzhov Charm is a versatile modal spell. It lets you bounce a creature you control back to your hand, kill an opposing creature, or reanimate a creature from your graveyard with a mana value of 1 or less.

Why did you choose to invest in Orzhov Charm?

“I chose this card because my roommate and I were playtesting 4-color Death’s Shadow back in 2016 and I thought the card was bonkers.”

Approximately, how much did you spend on each copy of Orzhov Charm? What value do you expect them to reach and why? And at what value, would you consider selling your position?

“My cost basis was 80 cents for the foil Charms and 18 cents for the non-foils. I would sell them if I could make a profit, so as soon as the market price is back above a dollar. I don’t think that will happen considering Claim/Fame and Lurrus of the Dream Den just do the job better most of the time.”