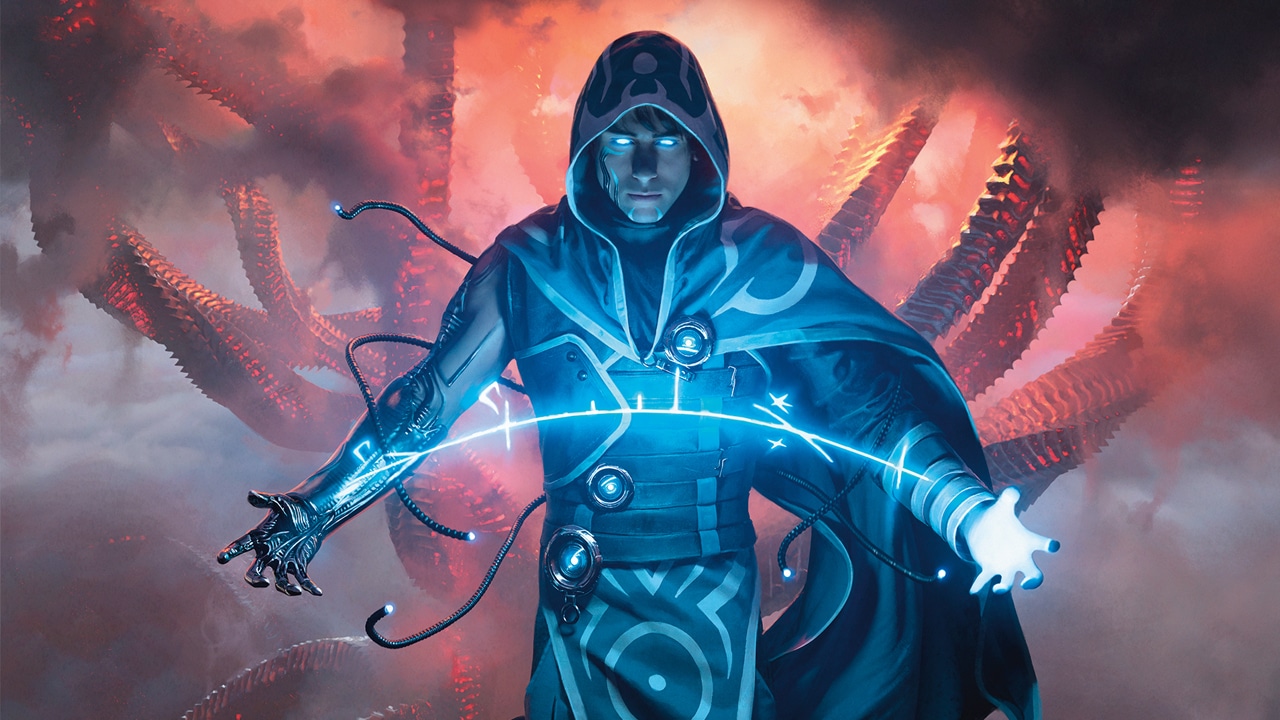 Phyrexia: All Will Be One’s spoiler season has officially kicked off! While we already had all of the Rare cards spoiled to us due to a mishap, that hasn’t stopped the other rarities from keeping secrets. We’ve seen some of the new Compleated Planeswalkers trickle onto the scene this weekend, but that hasn’t stopped the most shocking Compleation of all from making itself known during the stream. This, combined with a new crazy cycle of Phyrexian creatures, may impact your beloved MTG formats in a way you never expected. Some of these cards look like fantastic Commander staples!

Mondrak, Glory Dominus is the first of a new Mythic rotation of Phyrexian Horror creatures. Dominus, according to the Lore presented in the Phyrexia: All Will Be One worldbuilding video, are Phyrexian Gods that exist as living obelisks of each Praetor’s values. These things are gigantic hulking horrors that can symbolically represent a faction of the Phyrexians. Mandrak’s artistic design is based on a biblically accurate Angel. It sings/uses sound to dominate its opponents.

This might be the most powerful Commander card to be released in some time. Anointed Procession has a huge secondary market price that has only been getting more expensive recently due to cards seen in the upcoming set. Mondrak, Glory Dominus offers the exact same ability that has made Anointed Procession so expensive – token duplication. Both cards are in white, meaning that established token Commander decks are getting even more support.

Initially, the biggest downside to Mondrak vs. Anointed Procession is that it is a creature, making it much easier to remove. This is easily remedied, however, by Mondrak’s activated ability. By sacrificing two artifacts or creatures, Mondrak gains an Indestructible counter. This, ultimately, may make Mondrak even more challenging to remove than Anointed Procession itself. I use Anointed Procession in my upgrade of the Urza’s Iron Alliance deck since it allows me to create two Construct Tokens off of Urza, Chief Artificer‘s ability. This seems like a slam dunk in that archetype. This also looks like a fantastic upgrade to one of the new Commander decks coming out with Phyrexia: All Will be One.

Mondrak does synergize incredibly well with some popular cards, namely Fable of the Mirror-Breaker. Mondrak allows you to gain twice as many tokens on the popular saga’s first mode and allows the Goblin Shaman that appears to create twice as many Treasure Tokens upon attack. This advantage extends to the third phase of the card, where Mondrak will double the tokens that Reflection of the Mirror-Breaker creates. This can lead to some silly situations where you make multiple copies of your Goblin Shaman and create multiple treasures. Expect Mondrak to have a price tag once this set is available for players.

There’s no way that they would Compleat one of the main characters of the MTG series… right? It looks like Jace’s plot armor may have a few cracks in it after his mind fell prey to the Phyrexians. This has created a significant question on players’ minds: whether Compleation will be reversible, especially with the newly established stakes.

Jace has some somewhat impressive abilities, all of which are very on-flavor for the Planeswalker. His +1 is an ability seen on Jace Planeswalkers in the past that have done some significant work competitively. -3 power is a lot more important than people may think. This allows a slower deck to stall the game out until they can find the right cards to stabilize a problematic board state.

Jace’s -2 gives Visions of Beyond vibes, a card considered stock in most Modern Mill lists. While Jace’s minus will always mill some cards and draw a card, the upside of this minus becomes a lot better if you or an opponent has 20 or more cards in your graveyard. Suddenly, Jace’s -2 ability draws three cards, which is a huge difference. This could be good in a dedicated shell, but it really needs to draw three cards to be worth the effort.

Jace’s Ultimate is odd but could potentially lead to some unexpected wins. Tasha’s Hideous Laughter has rotated out of Standard, so unless there is a ton of unforeseen Mill support coming out, I don’t think this Ultimate will be a major player outside of Commander.

Ultimately, the two biggest questions with Jace’s viability in the metagame are as such: are there other Planeswalkers that do Jace’s job better, and is this card impactful enough at three mana? Notably, like the other Compleated Planeswalkers, Jace, the Perfected Mind, offers the opportunity for players to pay two life instead of paying the fourth blue mana. This means that Jace can, technically, be a three loyalty three mana Planeswalker. While three mana walkers haven’t been too problematic recently, they have a history of warping formats. Look at Oko, Thief of Crowns, or Liliana of the Veil (upon her original release) as examples of this. Honestly, while Jace is definitely not at the power level of Oko, his plus ability for three mana is a fantastic rate. You need a specific metagame for this ability to be worthwhile, but if we see that meta, Jace could be fantastic. Metagame viability will likely almost solely depend on the card’s +1 ability since his other abilities don’t look too exciting. Upon the reveal of Jace on stream, many MTG players were pretty underwhelmed.

Paladin of Predation is the last of the Phyrexia: All Will Be One cards presented today that we haven’t seen before. While a lot of other cards did steal the limelight, they have all been previewed or leaked in other places before being officially revealed.

Paladin of Predation has a pretty crazy implementation of a new mechanic. Toxic 6 is absolutely nothing to sneeze at. If this creature manages to connect with a life total, that player will get a whopping six Poison Counters! Remember, just like traditional Infect, ten Poison Counters means the game is over for that player.

While Nissa was spoiled before the beginning of spoiler season, as both a leak and a legitimate spoiler, it was only officially spoiled recently, and many people are talking about it! Nissa, Ascended Animist has a similar flavor to her War of the Spark card, even though it’s clear to most that Nissa, after Compleation, is not as good as the other one competitively. That said, her -7 is a good Craterhoof Behemoth at-home option that ensures she will see some experimentation in Commander. There’s even an option to use the Overrun effect immediately when you invest seven mana into this Planeswalker.

While Nissa is still capable of making 4/4 creatures that scale with her loyalty at five mana, she has two Phyrexian Mana-worth of customization that allows for Nissa to create larger Phyrexian Horrors if your mana allows for it. The -1 is an excellent option to have that, once again, is a fantastic option in Commander. This can also help cover some niche strategies that may appear in competitive formats where Nissa may see play.

It didn’t take long for players to start talking about whether Nissa will see constructed play. Many have agreed that the card is a slam dunk in Commander but are not sure if the card will see Standard play or not. Unfortunately, Nissa is far too slow for the other competitive formats, but that isn’t necessarily the case for some other cards spoiled recently.

Sword of Forge and Frontier

Mark Rosewater confirmed that a new sword is coming out in Phyrexia: All Will Be One. Only the Dimir and Gruul swords are left to complete this decade-old cycle of artifacts, and, while we do not know what the Sword of Forge and Frontier does yet, we do now know that the card is probably the Gruul sword that we’ve been waiting for.

For reference, these swords typically protect an equipped creature from two colors. The Sword of Forge and Frontier likely will offer protection from Green and Red. These swords also typically offer abilities related to dealing damage to your opponents. While we do not know what these are yet, the spoiler video suggests that this sword may be a Commander card available in the Mirrodin Rebel deck. This suggests that a token theme may be at heart with this particular sword.

This is Just the Beginning!

The new Phyrexia: All Will Be One set is off to a great start! We’re getting two fantastic new Commander staples in the form of Nissa and Mandrak, and we now have four more Dominus cards to look forward to! Mark Rosewater’s teasers for the new set suggest there’s still some crazy cards to be spoiled, like the new Sword and a Phyrexianized Staff of Domination. Today’s events also confirmed some of the new mechanics that are appearing in All Will Be One, so be sure to check that out when preparing new decks. We’re as excited as you are looking into the most unique MTG core set, so be sure that we will have more content discussing cards as we get to sink our teeth into them!