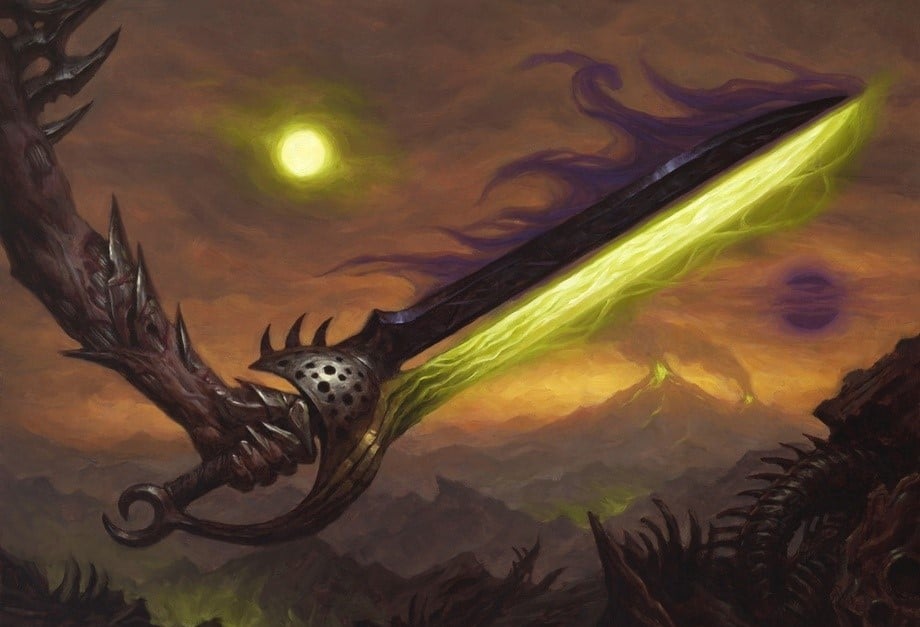 MTG Creator Spoils Powerful Artifact Reappearing in the Next Set!

Phyrexia: All Will Be One spoilers are slanted to officially start tomorrow! Even though the cat may be out of the bag a bit for this one, there are still a lot of cards MTG players have not yet seen. As is tradition at this point, Mark Rosewater has released a few teasers for players to get excited about tomorrow’s big reveal. Some of these abilities have the potential to be incredibly powerful, depending on their context. While we’ll have to wait and see if the other parts of the cards are good enough, here are some of the wildest abilities revealed by Mark Rosewater for Phyrexia: All Will Be One!

Players occasionally complain that, even after 18-19 years of existence, this cycle of swords has not been completed yet. The most recent inclusions for this cycle were seen in Modern Horizons Two. According to Mark Rosewater’s Phyrexia: All Will Be One spoilers, another Sword will be introduced! Of the two-color combinations we’ve seen, Dimir and Gruul are the only two Swords remaining to complete the cycle.

Of all the teasers provided in Rosewater’s statement, this one has the community chattering the most. Many are already trying to predict what this sword will look like:

“Only Dimir and Gruul colors are left for a new sword.

“I was thinking of rg sword with the rebels stuff going on. It seems like Rx will be the equipment theme color.” – Living_End

A Phyrexian Staff of Domination

Infamous for its infinite combo potential, the Staff of Domination is a card that will sound warning sirens at a Commander table whenever it resolves. This Commander menace will end the game on the spot whenever infinite mana is achieved. It does this by untapping itself, drawing cards, and gaining life infinitely. Because the Staff can untap creatures, it can also help assemble an infinite mana combo while being a win condition.

We have no idea what a Compleated Staff of Domination would look like, but some of the past Compleations of famous artifacts like The Weatherlight suggest that the card could be quite different. We’ll have to wait and see if this card will be another combo menace.

While this may not be have been a significant talking point a few years back, two big trends introduced in recent times suggest that this card could potentially be very impactful. Omnath, Locus of Creation was the last major four-color Legendary Creature we saw, and it wreaked havoc. The card currently sees Pioneer and Modern play and saw itself banned from Standard very early into its legality. The card simply produced way too much advantage compared to the rest of the field and locked the format out.

The piece of information that has Reddit users excited, however, is that a very well-known four-colored Phyrexian character already exists: Atraxa. Rather infamous in Commander for its Proliferate ability, which is also confirmed to be returning in Phyrexia: All Will be One spoilers by the various leaks seen in Dominaria Remastered, there are a lot of players excited by another Atraxa.

“we know it’s gonna be Atraxa because obviously.” – Exarch-of-Sechrima

“It’s likely Atraxa at Mythic. Whether she’s a new card or a reprint remains to be seen, however.” – TechnomagusPrime

An Artifact That Grants Loyalty Abilities to Planeswalkers You Control

For any who are not aware, I love me some Superfriends in Commander. This is a unique effect we have not seen before and could be a very cool symbolic piece that represents the hold of Compleation over the newly Phyrexianized Planeswalkers. It’s challenging to know what this could be – whether it’s just added loyalty abilities to Planeswalkers or a way to use Loyalty abilities to a new goal on the artifact. Either way, it’s a new card design that I am excited to see.

Phyrexia: All Will Be One Spoilers Already Leaked

Unfortunately, having the entire portfolio of Rare cards appearing in Phyrexia: All Will Be One leaks in Dominaria Remastered is beginning to affect the quality of teasers. While the teasers above have not been spoiled yet, many of them have already appeared in leaked contents. If you’re interested in seeing a complete list of tidbits and how they’ve already occurred, you can check out this Reddit comment. I will not list the affected tidbits here for those who want to wait for official spoilers. I can confirm, however, that none of the points talked about in this article have been leaked as of the writing of it.

Do any of the talking points in this article interest you? If so, consider checking into the Phyrexia: All Will Be One’s reveal event occurring January 17 at 9 am PT. If you can’t make it, don’t worry about missing it! We’ll have all the juicy details available here to catch up on!