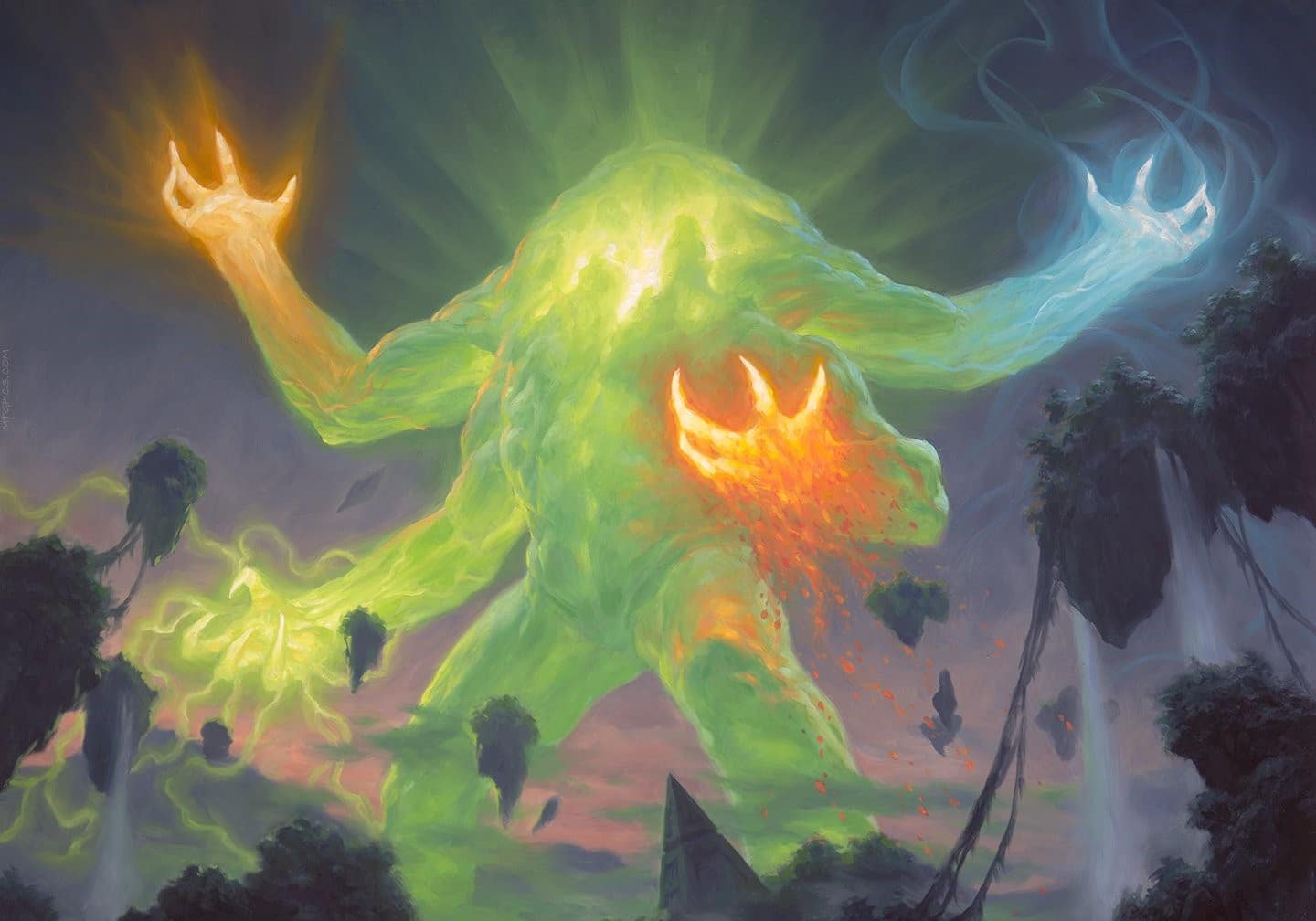 There have been a lot of abnormal market movements happening these past few days. From the strange rise of _____ Goblin to the propulsion of Earthbind due to Wizards’ designation of it not being up to ‘modern standards,’ there are gigantic price spikes everywhere. This particular spike isn’t as significant percentage-wise, but it means that anyone participating in a Store Championship will be playing for a $200 promo! Omnath, Locus of Creation, in its textless treatment, is more expensive than anyone expected.

There was a lot of hype surrounding this Store Championship promo when it was previewed alongside Dominaria United’s first look. Ironically, Wizards of the Coast decided to do a textless treatment to one of the most text-dense cards in the game. Omnath, Locus of Creation does a LOT of things:

When Omnath Enters the Battlefield, you draw a card. Omnath also has the equivalent of a Landfall ability, but each subsequent land drop in a turn triggers a new ability.

This card sees a ton of constructed play – or at least it did until Yorion’s ban in Modern. Not only was Omnath part of one of Modern‘s tier-one decks, but it also saw fringe play in Pioneer. Omnath is also an incredibly popular and influential card in Commander. This is, undeniably, where it shines most.

Omnath also has an absurdly powerful history in Standard. Unfortunately, Omnath proved to be too much for the format and was promptly banned after being given a chance briefly. Omnath has since rotated out of Standard as of this September.

As can be seen by the entire sales history of this card, Omnath was significantly undervalued when it first hit the market. Aside from the $2 outlier, a few lucky individuals got their copies for less than $100. It didn’t take long for Omnath’s price to rise continually from $150 to about $200. That said, there are instances where this card has sold for $300 in its price history! This is incredibly expensive for an LGS play promo… or is it?

Anyone who wants to get an Omnath of their own without forking over a booster box’s worth of cash will need to participate in their LGS’s Store Championships. The date and competitive format will vary by place, but it is generally a competitive two-player format, and they’re happening sometime between October 15 and October 23. While cEDH is an option, it is not one that many LGS seem to be choosing.

You’ll notice that there are three different promotional cards for current Store Championships. While the Omnath is worth more than its weight in gold, the same cannot be said for the other two promos.

Players participating in a Store Championship will receive a promotional Spell Pierce. This inexpensive staple sees play in multiple formats, including Modern, Pioneer, and Standard. While it isn’t worth much, finding a place to play with this fantastic new artwork should be easy.

Gilded Goose is more of a Pioneer card. This card is only rewarded to those who successfully top eight at a Store Championship. The card is currently valued at around $5, but it does not see a lot of play. That said, should the food synergy with Trail of Crumbs ever rise up, the value of this card may explode.

Those fiending for this $200 payday Omnath will have to win the whole Store Championship. This adds an element of scarcity to this already in-demand promo, skyrocketing the price even higher. While this may sound difficult in theory, consider that most LGS will be hosting Store Championships. You could get an easy victory in an eight-player tournament if your turnout is small.

Is Omnath Worth it?

Considering the demand behind this card, the price will likely retain a good amount of value. That said, there will be more of these hitting the market as the week goes by, so consider that this may be an artificial spike caused by scarcity. These are rare enough that there won’t be a ton in the market. Most importantly, this Omnath, Locus of Creation is a beautiful foil treatment of a card popular in Commander. Either way, players should have many opportunities to win a $200 Omnath of their own in the coming week.