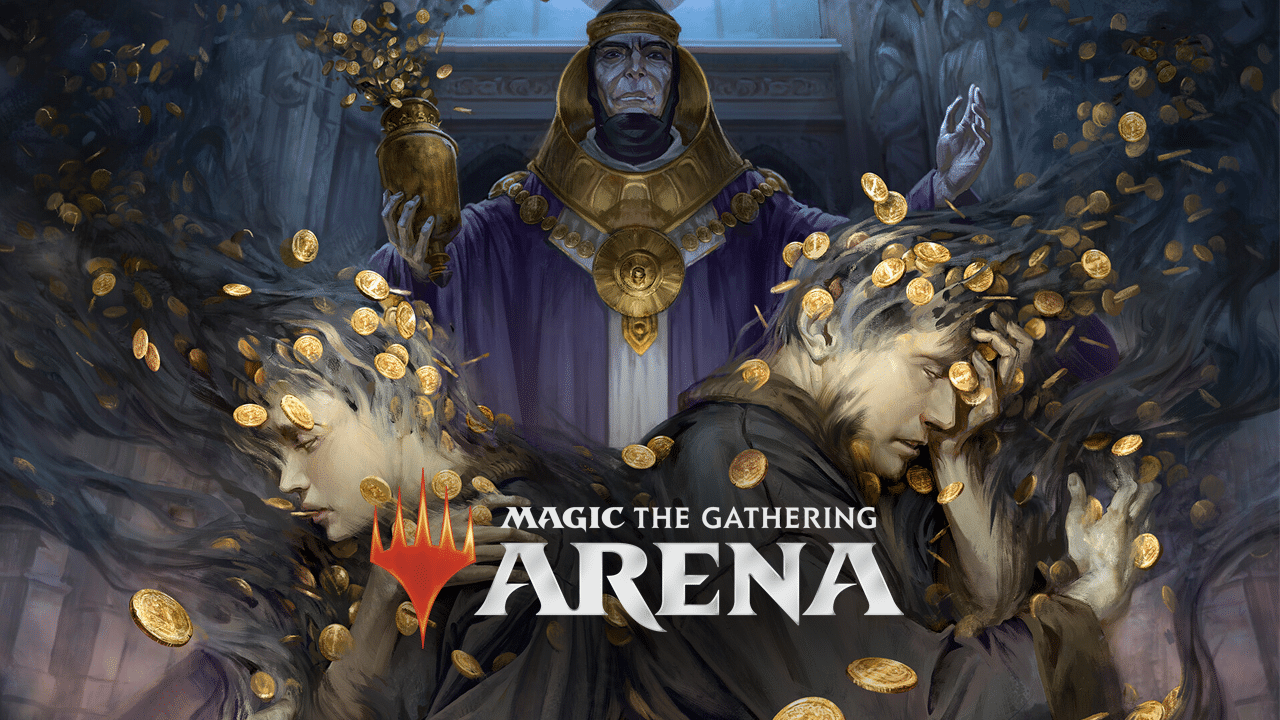 Is MTG Arena Pay to Win?

Do you have to buy your way to victory in MTG Arena? One of the hottest button issues surrounding MTG Arena is the economy. Many in the community view the economy as a major issue prohibiting accessibility of play that needs to be solved. This often leads to the question, is MTG Arena pay to win? Today we’ll answer that question, and explore the economy and potential ways that Wizards of the Coast could improve the economy.

What is Pay to Win?

The definition of Pay to Win is where someone can buy gear or items in a game that progress the player at a faster rate, and makes the game largely unbalanced, even for people who have skill in the game without paying. By this definition, the answer is No. Magic Arena is no more pay to win than paper magic is.

Now is there a power disparity between top-end mythic cards and commons? Sure, but this is also true in paper, and games can still be won by free to play players overpaid to play players. Many free to play players make it to Mythic rank on Arena all the time. The same goes for paper play. If someone who has a $25 budget Mono-Red aggro deck shows up at a Friday Night Magic, and played against someone with a $400 Sultai Control deck, you say that the Sultai Control player is a “pay to win” player. The Mono-Red player can still win games against the Sutlai Control player, and the same goes for Arena.

Read More: Can We Please Get Commander Products In MTG Arena?

So, if Magic Arena by definition is not “pay to win”, why do many in the community feel this way? This is once again driven by the economy. The economy on Magic Arena is such that if you’re a casual to even average player, it feels really bad to put money into the game, since you have no real method of getting anything out of it, or you’re not even guaranteed to get the cards you want. The Wild Card system is failing, as the free to play acquisition of them is far too slow, and the fast way of getting them involves cracking packs of sets you may not necessarily want or already have. Let’s look at a few other digital TCG’s and their economies and see what they do right and what they do wrong, and see if they can be applied to Arena.

Read More: What We Want to See in MTG’s Streets of New Capenna

Hearthstone is the main competitor to Magic Arena and has been around for a long time. Their economy is such that you can buy packs with gold earned in-game, or directly with money. They have a crafting system where you can disenchant cards for dust, and use that dust to craft new cards. The ratio though is a 1/4 dust return on the crafting cost. For example, if a Legendary costs 1600 Dust to craft, you’ll only get 400 dust if you disenchant it.

I am personally not a fan of this economy system. I know that many have said that this would be enough, but in my opinion, this hurts more than helps. Many people would be dusting their collections to craft new cards each set, and be forced into purchasing packs again. Believe me, I’ve done it countless times on my Hearthstone account, and it has happened to many as well.

Legends of Runeterra is a newer TCG made by Riot Games and it’s economy is regarded as one of the most player-friendly ones out there. It has a hybrid dust and wildcard system, and a weekly vault system that increases in rewards based on how much you play. Dust, or Champion Shards as they’re called, can be gotten through various means, such as daily quests, the weekly vault, expeditions (their draft mode), and through breaking down unwanted cards. This is a very accessible way to craft cards for free to play players. For those who want to get their cards quicker, Wild Cards are purchasable individually through their store.

The only thing that this game gives up is the lack of “packs”, which has been something synonymous with Magic: the Gathering since it’s beginnings. If players are willing to give up the feeling of cracking open some booster packs on Arena, the Legends of Runeterra model is a really good place to start. It’s accessible to all kinds of players, and it’s not crazy overpriced. Each “Champion” wild card costs about $3, Epics, about $1.50, Rares about $.50, and commons about $.10.

A brand new digital TCG that was just released today (January 19, 2022) is Yu-Gi-Oh! Master Duel. This new digital version of Yu-Gi-Oh brings nearly every card in the game to the table, with proper TCG rules, events and more. Their economy is very interesting. You can purchase packs through Gems only. Gems can be purchased with real money, but also can be earned through their PvE system, battle pass and missions.

Their pack system is where things get interesting. When you open packs, if you open 10 at a time, you get a guaranteed SR (rare) or UR (mythic). Upon opening one of those cards, you unlock “secret packs” which are effectively focused packs that align with the SR or UR that you pulled. If you’re looking to build a specific deck archetype or tribe, then this is a great thing. While this is cool, I don’t know how well it’d play into Magic Arena without some specific code to designate cards to archetypes.

Lastly, Cards can be crafted using a “dust system”. These points are acquired via dismantling cards of the same rarity, and some come through the battle pass and missions as well.

Another concern from the players is the inability to trade cards. While a trade system might be a post economy fix, this does bring up another option of wild card acquisition. That’s to incorporate a wild card trade-in system. Similar to the “dust system”, in this system, players would be able to trade a set number of wild cards up or down at a ratio. For example, you could trade 4 Uncommon Wild Cards for 1 Rare Wild Card, or trade a Mythic Wild Card for 4 Rare Wild Cards. This would allow players the flexibility to target specific wild cards that they need at the expense of excess wild cards.

Read More: MTG’s Modern Format is the Most Expensive It’s Ever Been, and it’s Our Fault

The answer to what is the economy players want most likely is something close to that of Legends of Runeterra, where ultimately the game is accessible for most players. One thing that we have to bear in mind is that Wizards is a company and have to make money, but I think that the inclusion of a system like this would still make them a good amount of money, as the “dollars in” is made on the coins, and then giving players access target specific rarities of cards or cosmetics is of no consequence to them.

What are your thoughts on these systems? Would any of the ones mentioned here work for Arena? If you could fix the Magic Arena economy, how would you do it? Let us know in the comments.