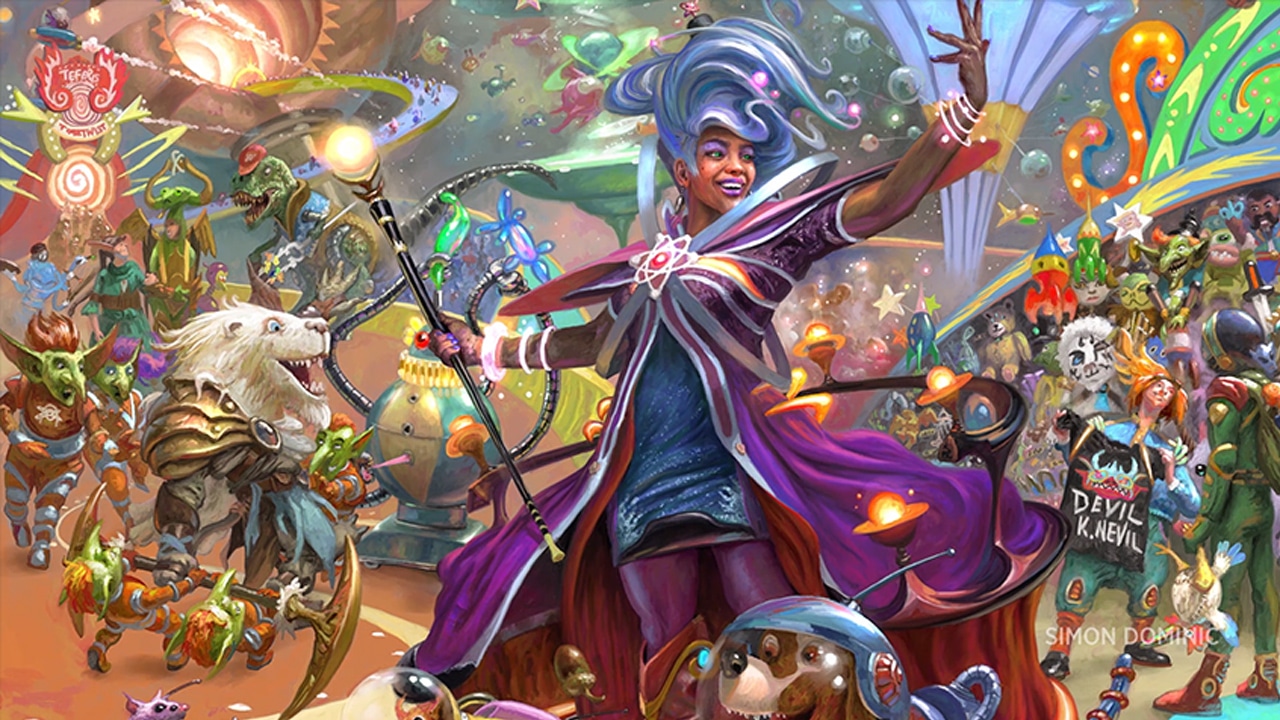 Over the weekend, Mark Rosewater unveiled the latest batch of Unfinity spoilers during their Comic-Con panel. Unfortunately, while there were plenty of exciting cards to get excited about, the presentation had a significant flaw. Long before Unfinity is set to get printed, Magic’s latest Un-Set already has misprints, causing many problems.

For the first time in Un-Set’s history, Unfinity features black-bordered cards. The entire set is black-bordered, with only “Acorn cards” being illegal in every format. As we’ve mentioned before, Acorn cards are indicated by the new Acorn security stamp. This stamp is a simple and easy indicator to show whether or not a card is playable in Eternal formats. Problematically, however, that shiny stamp appears to not always be accurate.

During Mark Rosewater’s Comic-Con panel, Magar of the Magic Strings was unveiled, much to everyone’s enjoyment. Alongside this powerful Minotaur Performer, Rosewater also unveiled its showcase frame, highlighting Unfinity’s ’50s and ’60s retro-pop-inspired styles. Unfortunately, the showcase frame for Magar of the Magic Strings had one major problem: its security stamp.

Unlike the standard printing of Magar of the Magic Strings, which features the usual security stamp, denoting it is Eternal playable, the showcase frame featured the Acorn security stamp. Once pictures of this card started to circulate online, players were quickly confused, as there was no clarification on the correct printing. This was a significant cause of worry for players, as what if this misprint was to happen on the physical Unfinity cards.

Thankfully, to help clear up any confusion, Mark Rosewater has since clarified the mistake. Replying to a question on their Blogatog, Rosewater stated that Magar of the Magic Strings “[is] an eternal card. The image of the booster fun version is in error.” While this means players can once again be excited about all the Commander decks they’re able to build, this clarification doesn’t fix everything. The incorrect version of the card is still circulating online, after all, which may lead players to propagate false information.

This issue of mistaken legality is not one that’s often seen in Magic: the Gathering. Recently, however, the confusion about the legality of cards has been amplified thanks to Alchemy. In Alchemy, many cards are adorned with a unique “A” symbol by their name to indicate it’s an Alchemy variant. Other cards feature a new name to differentiate them from their real-world counterpart. Despite this, confusion has still been running rampant among newer players.

With the looming release of Unfinity on October 7th, this problem is set to become even worse potentially. For new players excitedly drafting the set, it may be hard to differentiate which cards are legal. This is especially true if they do not know what the new Acorn security stamp means. Even after telling the security stamps apart, Unfinity still has uncommons and commons without any security stamp. For reference, cards without an Acorn security stamp are also legal in Eternal formats. Since all of Unfinity’s cards are black-bordered, however, they all look playable to the casual observer.

While it would cause an incredibly mismatched set, only some of Unfinity’s cards being black-bordered would have solved this issue. Admittedly, this would have been an aesthetic nightmare. However, players would be able to tell a card’s legality at a glance. Without a transparent system in place, for example, one that’s not susceptible to reprints, players will have to rely on checking a format’s Banned list.

Magar of the Magic Strings

Outside of its major malfunction of being misprinted, Magar of the Magic Strings is a card that’s full of potential. For three mana, 1BR, Magar of the Magic Strings lets you note a card in your graveyard and put it onto the battlefield upside down as a 3/3 creature. This creature also comes with the ability of “whenever this creature deals combat damage to a player, you may create a copy of the card with the noted name. You may cast the copy without paying its mana cost”.

This ability is incredibly potent regardless of whether you’re looking to generate creatures or repeatedly recast spells. For instance, using Magar of the Magic Strings’ ability on Demonic Tutor would let you tutor turn after turn, so long as the face-down copy can keep hitting your opponent. Even casting Magar of the Magic Strings’ ability on something as simple as a Lightning Bolt would be incredibly powerful.

Unfortunately, Magar of the Magic Strings is somewhat limited by its colors. As your commander, Magar of the Magic’s Strings will keep you out of blue and a litany of powerful instants and sorceries you might want to cast. For instance, the only viable take an extra turn spell in black is Temporal Extortion. Alternatively, Red has a number of options such as Warrior’s Oath and Final Fortune. These cards, however, have the downside of making you lose the game, so you’ll need cards such as Platinum Angel or Sundial of the Infinite to circumvent that problem. The 3/3 face-down creatures that are created also have no guarantee of hitting your opponent or surviving the turn. Despite this, we imagine Magar of the Magic’s Strings is going to create no end of interesting decks.