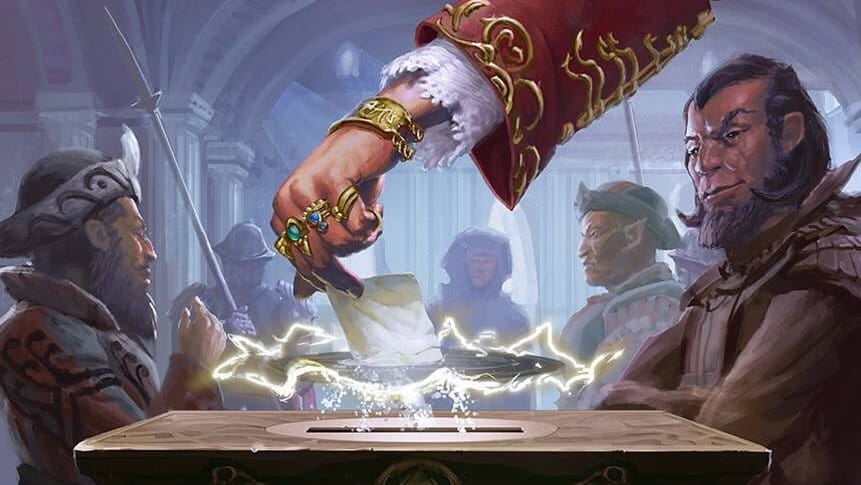 How To Draft In Magic: The Gathering

At some point in everyone’s MTG journey, you’ll eventually have to ask what is Draft in Magic: The Gathering? Drafting is an integral part of most players’ skillset, and it’s also a huge amount of fun. If you’re unprepared, however, it can also be quite daunting.

One of the best things about Drafting is that you can do it with friends, with a mix of packs, with massive groups, or in proper competitions. It’s a very flexible format, and it’s also one of the best ways to learn about the cards in any new set too. So, here’s what you need to know.

What is Draft in Magic: The Gathering?

A Draft is style of play where every player starts with three packs of cards, opens them, picks a card, and passes them on. You repeat this until there are no cards left to pass from any of the packs, and then you build a deck.

Draft is a limited format, which means that you don’t have access to any cards, other than Basic Lands, that you don’t open and pick during the first phase of the event. After you’ve built your deck, you’ll then play against other players to determine the winner. Sometimes that’s a classic tournament style where the winners keep playing until someone wins the most, sometimes it’ll be a round-robin style thing.

So, that’s what a Draft is, but how do you actually take part in one.

How to Draft in Magic: The Gathering?

For the sake of brevity, we’re going to go ahead and use Wizard’s words on this. “At the start of booster draft, each player opens a booster pack and picks a single card. (Don’t show the other players what you pick!) Then everyone passes the rest of their pack to the player on their left, each player then picks a card from the pack they just received before passing again. This process continues until all the cards in those packs have been drafted. Then each player opens a second pack, but this time, you pass the pack to your right. After all those cards are drafted, you do the same with the third pack, passing to the left again.”

The deck you build has to contain at least 40 cards but can include any number you choose above that. You can also consider any cards you Drafted but didn’t put into your main deck your sideboard. This allows you to potentially answer anything that your main deck can’t deal with.

Alongside the strategy that goes into the deck construction and the matches themselves, one of the most intriguing parts of a Draft is actually picking your cards. You’ll often need to consider the colors that get passed to you and try and keep track of what colors don’t seem to be getting picked up, and then also balance that with the need for game-winning cards, removal, or some strong synergies. It’s an incredibly fun format, but mastering a Draft often takes a lot more work than other formats.