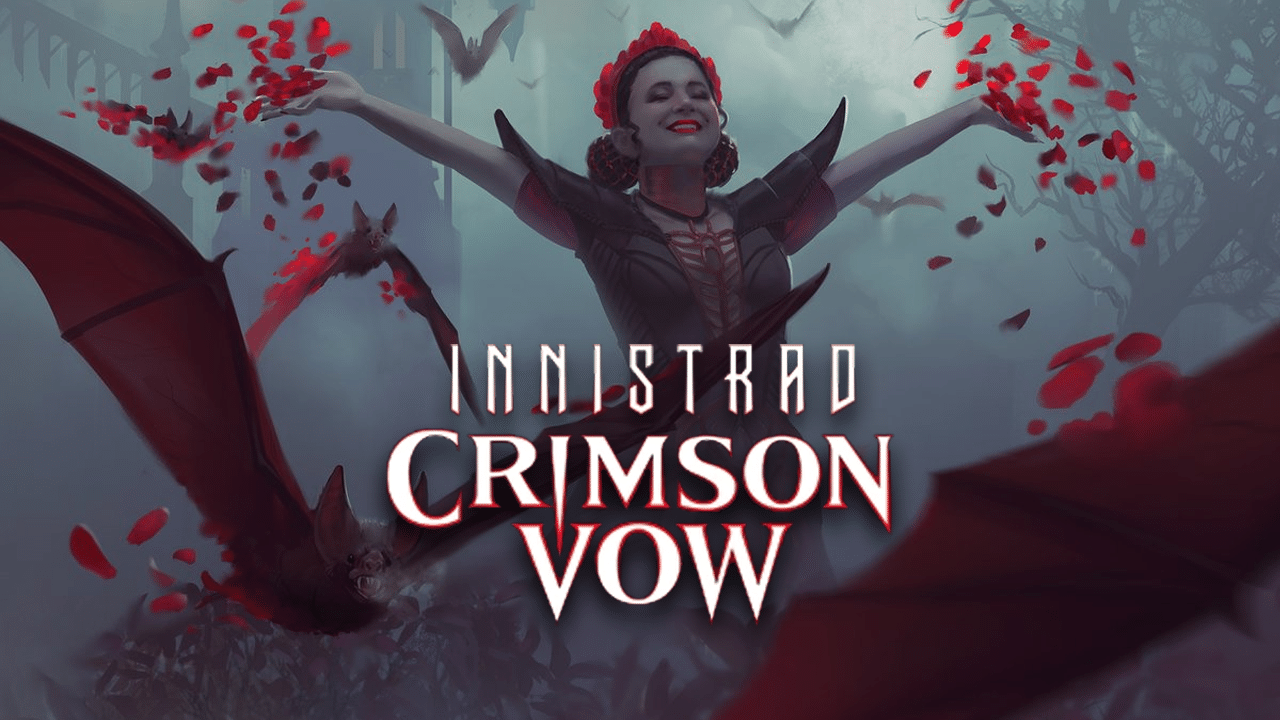 Magic: The Gathering: Innistrad was released over a decade ago – yes, you’re that old now – and it quickly became a popular set that encompasses gothic and Lovecraftian horror. The original Innistrad set offered a swathe of unique cards, flavorful design, and a memorable draft set. As a result, the Innistrad set became one of the most adored by players, which saw a revisit in 2016 with Shadows Over Innistrad and Eldritch Moon to a similar reception.

Now we’re on the cusp of Crimson Vow’s release which follows the hugely popular Midnight Hunt. We’ve got all the latest news and reveals from this set below.

Crimson Vow releases start from today as the set is now available on MTG Arena!

You can log in and grab the new Mastery Pass as well as using the code PlayVOW for three free packs!

Now, we’re back again focusing on Vampires with the first Innistrad offering, Midnight Hunt focusing on Werewolves. Both of these sets will be Standard legal and available on MTG Arena and Magic Online. With that out of the way, let’s recap what we know about the second entry in this year’s Innistrad set so far.

On Aug 5, Wizards of the Coast (WotC) supplied a teaser of Crimson Vow which features returning characters such as Sorin and Olivia. The story goes that the set features the biggest vampire wedding in Innistrad history. Crimson Vow will carry on the new Innistrad storyline which began in Midnight Hunt. Expect the set to include Werewolves, Vampires, and the undead.

Previews for the upcoming Standard gothic horror set begin on October 28. If you want to sink your teeth in further, we have a dedicated preview gallery for Innistrad: Crimson Vow which will be updated as cards are revealed. Below is the preview schedule for Innistrad: Crimson Vow where creators, players, and personalities will show off the new cards.

The expected release date for Crimson Vow is November 19, with the pre-release happening on November 12. The Magic Online and MTG Arena release is slated for November 11.

Innistrad: Crimson Vow will be available to preorder over at Amazon and TCGplayer later this fall. It’s expected we’ll see the following products in the set.

What makes Crimson Vow an interesting release is the return of box toppers in Set Booster boxes. Box toppers are uniquely framed cards, and you get one of these with a Set Booster box purchase. Before, we have seen the return of Expeditions with Zendikar Rising, and Godzilla cards with Ikoria: Lair of Behemoth’s release. It’ll be interesting to see what kind of box toppers will come with Crimson Vow‘s release.

With the Commander decks, these have been confirmed for this set release similar to Midnight Hunt. Also, the pre-constructed decks will feature 15 new cards each, including new legendary creature cards to switch as your Commander similar to previous releases. These Commander decks are called ‘Spirit Squadron’ and ‘Vampyric Bloodline’.

While Crimson Vow is a little while away with Midnight Hunt previews incoming, we’ll update this page with more information when we have it.