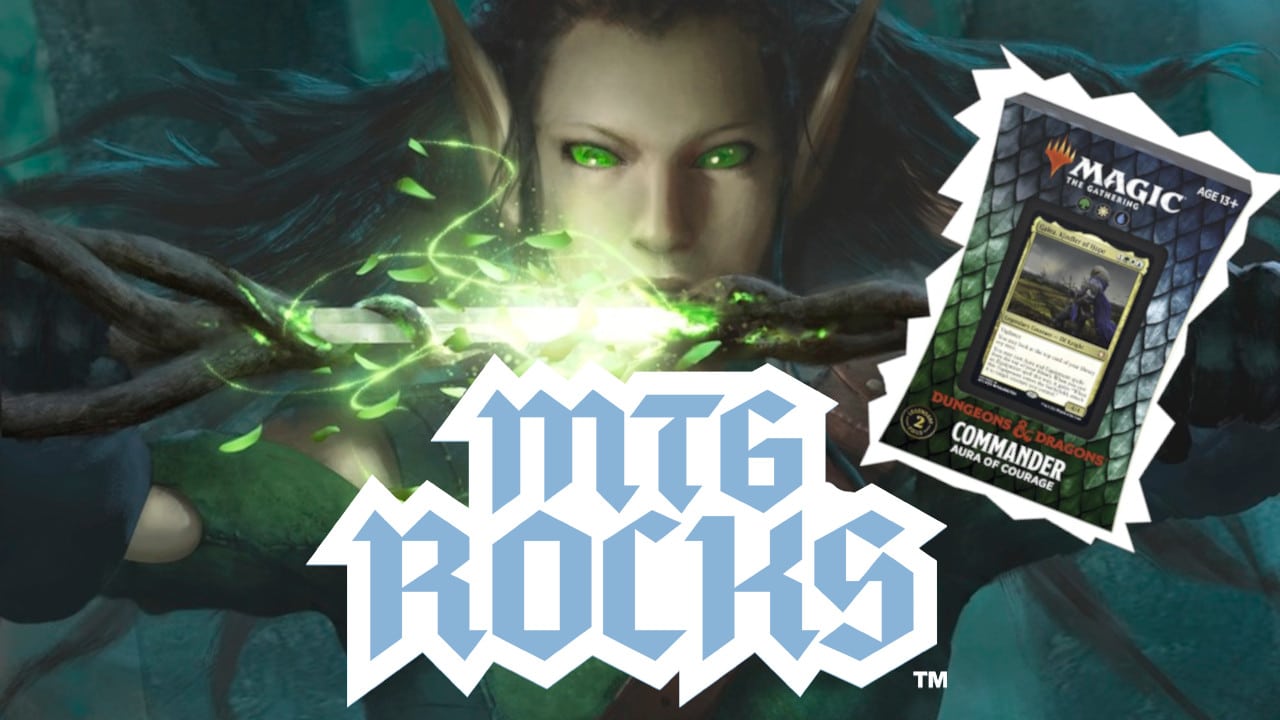 The Aura of Courage Commander deck is jam-packed with some AMAZING reprints. But maybe you don’t want to spend $35.00 on the whole deck. Maybe you just want a few choice single cards. That’s fine! Here are some of the best single cards you can buy from the deck!

Best New Card to Buy From Aura of Courage

There’s a strategy and a corresponding nickname for “putting all you eggs in one basket” in Magic. It’s called Voltron, (based of a Japanese anime by the same name, in which many small robots combine into a larger more powerful one).

MTG Voltron strategies generally revolve around suiting up one creature with a bunch of Aura or Equipment spells. And this can be risky because a single removal spell by the opponent can wipe out everything you’ve invested into your massive creature.

Well, Robe of Stars is like an insurance policy for Voltron decks in Commander. If an opponent attempts to remove your one buffed creature, you can phase it out until your next turn. The best part about Robe of Stars is that it doesn’t detach equipment or auras when your creature leaves the battlefield; they follow the creature through its nonexistence and back!

Robe of Stars is amazing in any Voltron Commander deck like Sram, Senior Artificer or Syr Gwyn, Hero of Ashvale. And the regular border card is currently only $4.00. That’s a great deal!

Best Reprints to Buy From Aura of Courage

Here’s a solid reprint with new art. It’s one of the Top 10 most played green cards in Commander according to EDHREC.

Heroic intervention actually had another recent reprint in Core Set 2021. Before that, this card was pushing $15.00. Despite the injection of supply from Core 2021, the price quickly rebounded. Now, with another reprint in the AFR Commander decks, Heroic Intervention is still holding around $8.00.

This tells me there’s a lot of demand for this card. It’s quite possible that, given time, it could climb back to its $15.00 price tag. I’m definitely getting my copies today.

Before getting reprinted in the Aura of Courage Commander deck, Utopia Sprawl, originally printed as a common in Dissension, was approaching $20.00+. This all-time price high for the card was due to its growing popularity in Modern, in addition to being a staple in Commander.

This reprint was much needed, bringing the card down to a more reasonable $5.00-$6.00. It’s a great inclusion for any green deck in Commander, and I’d pick them up now while they remain $5.00.

Another Commander staple! This deck was really packed with goodies. Similar to Three Visits, Nature’s Lore is a fantastic piece of ramp in green-based Commander decks, allowing you to get any Forest from your deck, including dual lands like Stomping Ground.

Nature’s Lore is currently $4.00 thanks to this reprinting. If you need them for Commander, I’d get them now.

Puresteel Paladin was verging on $15.00 before it was reprinted in this preconstructed Commander deck. The reason being is that one of the most popular Modern decks, Hammer Time, features a full four copies of Paladin:

Sword of the Animist

Sword of the Animist was about $12.00, but thanks to getting a reprint in Aura of Courage, it is now available for around $5.00. This is a Commander staple that can be played in any Commander deck due to it being colorless. It’s particularly great in equipment decks like Galea, Kindler of Hope or land-focused decks like Omnath, Locus of Creation.

Or, Buy the WHOLE Deck!

While I normally advocate for just buying singles when it comes to Magic products, in this case, the Aura of Courage Commander deck is filled with so much value, it could be worth buying the whole deck. The value of the six cards I talked about in this article totaled about $31.00. Last we checked, the whole deck cost $35.00 on TCGplayer.

I’d still advise checking out the whole decklist, and see if you can make use of any of the other cards I didn’t talk about in this article. But there’s definitely a lot of value in the deck.