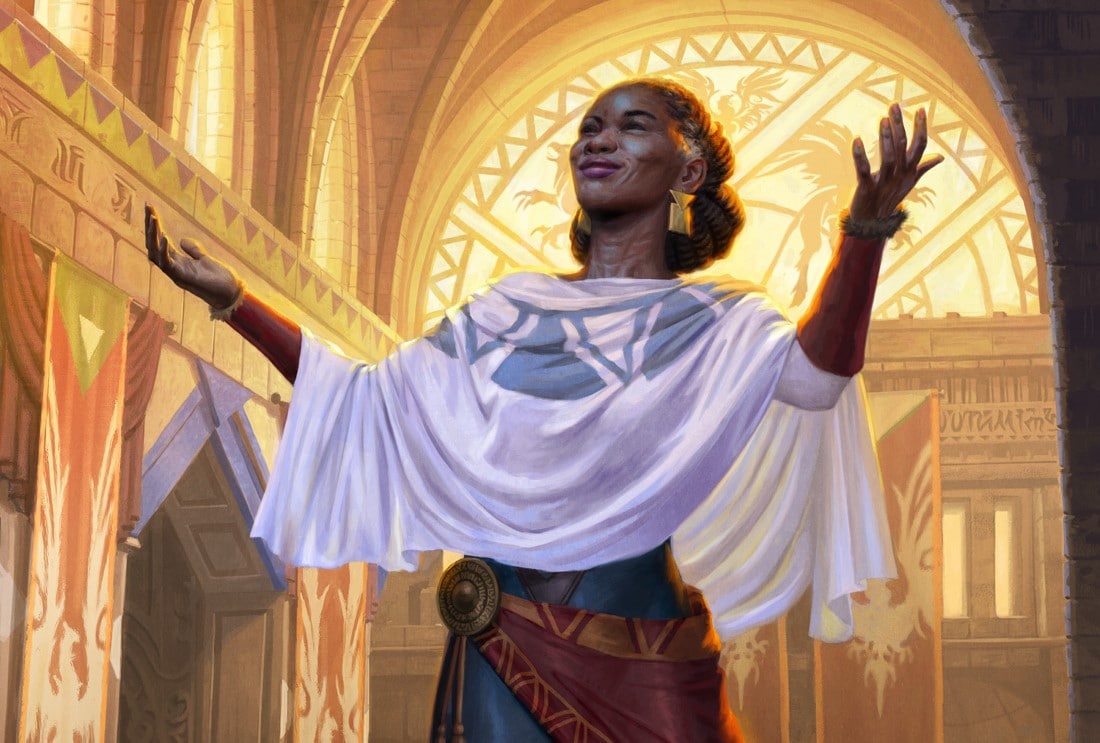 MTG Arena players like to use Historic Brawl as an alternative to playing some casual games of Commander. While the Commander format is, by far, the most popular thing to do when playing MTG, it can be difficult to set up a date to meet up with friends and get some games in. For those short on time, logging onto MTG Arena and playing some Historic Brawl can be a bit of a replacement. Besides a much smaller card pool, one significant difference with Historic Brawl is that it allows online-only cards. Because these cards employ effects that tend to extend between zones, it can lead to many problematic infinites. Considering that the Arena Open is coming up for Alchemy, those wanting to take some money home may want to watch out for this particularly terrifying combo with Niambi, Beloved Protector. Not only can it draw an entire deck, but the combo user can get out of a bad spot by forcibly drawing the game.

This Dominaria United Alchemy card is much stronger than it may first appear. The online-only perpetual mechanic has proven extremely problematic in recent history, causing some bans and balance changes in the Alchemy format.

Niambi’s particular grievance appears when you start creating copies of it with cards like Mirrorhall Mimic. When Niambi, Beloved Protector enters the battlefield, she perpetually gives a nonlegendary creature in your graveyard the ability to return while also drawing you a card if a spell or ability targets it. The only condition is that the card in question has to have been put into the graveyard from the battlefield this turn.

Niambi is Legendary. While this prevents Niambi from being targeted by her own ability, copy creatures get around that. Because of the Legendary Rule, you cannot simultaneously have two copies of Niambi on the battlefield. Since this is the case, you can choose to keep the original Niambi while putting the copied version of her into the graveyard.

Niambi’s ETB ability from the copied entry will still trigger. That trigger can now target the copy card in your graveyard. While Niambi is a Legendary Creature, Mirrorhall Mimic is not. The Mimic then returns and copies Niambi infinitely, all while accumulating Perpetual triggers that care about it being targeted by spells or abilities. Past this point, once you’ve stacked enough triggers, keep your copy of Niambi in play. Use a removal spell or an ability to target Niambi and draw cards equal to the number of triggers on your card. Don’t be fooled by the ‘once per turn’ clause here. EACH perpetual effect can trigger once.

This has led to the absolutely absurd deck with which the MTGA player TraceOn recently 7-0’d the recent Alchemy Challenge. While you still have access to the pseudo-infinite in the deck, you can also cast multiple copies of an exceptionally discounted Pugnacious Pugilist to end the game.

While this combo is plenty strong in Alchemy, it is MUCH better in Historic Brawl. You can run Niambi as a Commander here, meaning you can have constant turn 2-3 access to this combo. This card’s only weakness in Historic Brawl is the weakness of MTG Arena itself. Apparently, Arena will notice around the 26th iteration of the loop that this combo ‘isn’t forwarding the game state’ and will threaten to draw the game if you keep looping the combo. If it weren’t for that, players could easily draw their entire deck on turn four and cast Thassa’s Oracle to win the game.

While MTG Arena is the only thing keeping this combo from breaking some formats in half, it’s also making the combo a lot worse from a play perspective. If a player cannot win with the Niambi Combo, they can forcefully draw the game. This could cause a potential problem with the Arena Open, where players use this combo as a cop-out to get out of a game that they have no way of winning. By recycling this state, the player could theoretically win the open by forcing draws instead of losses.

The other problem is that it takes a long time to resolve the stack when this combo goes off. You simply have to sit there while each perpetual trigger resolves individually, drawing you a card. These things can, and likely will, be fixed if the Niambi combo becomes a more significant problem.

Alongside Niambi, Reezug, the Bonecobbler also looks to bring about potential issues for players interested in the Alchemy Open this weekend. While Niambi has been more established as an issue, Reezug sports an effect that can go infinite incredibly effortlessly with cards like Devoted Druid. At worst, Reezug can be an incredible engine to recur value in a sacrifice deck. Either way, if you’re looking to play some fun games of Historic Brawl after a long day’s work, make sure you don’t let Niambi get copied!