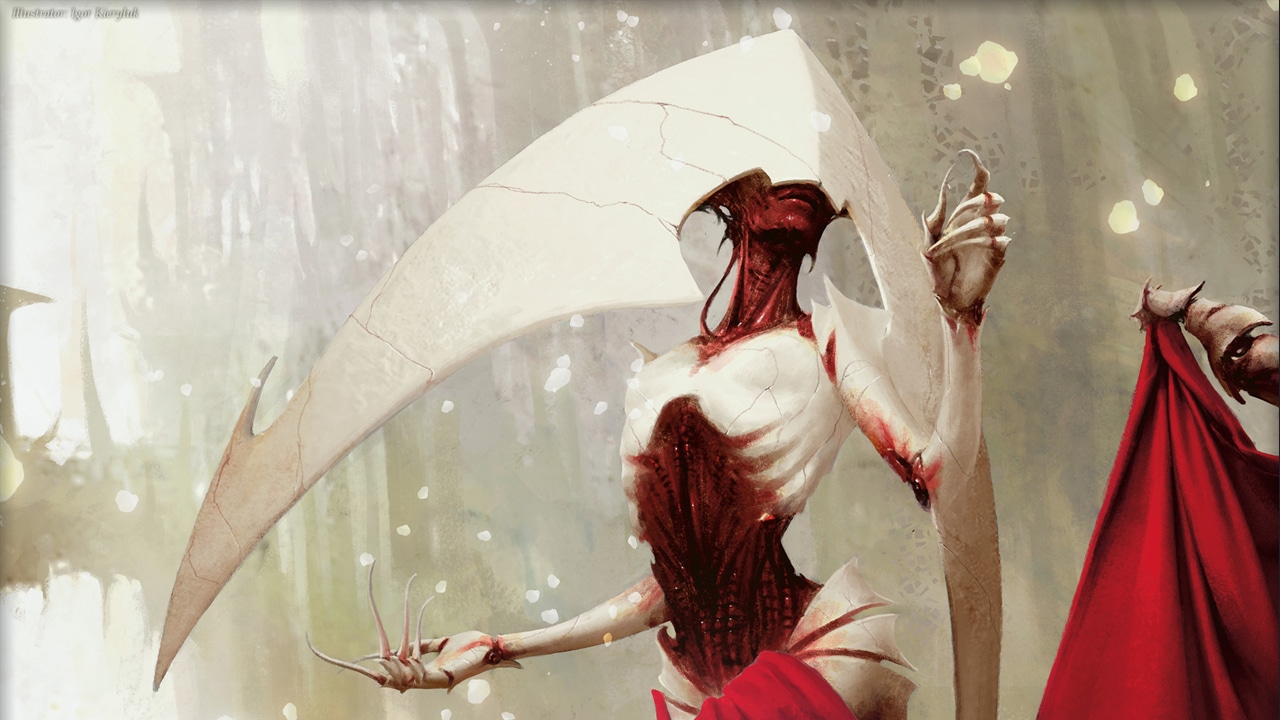 Who Are the Phyrexians in MTG?

As an ancient and corruptive force, Phyrexians are one of the devastating enemies in MTG. With the power to corrupt, or rather “Compleat,” creatures and planeswalkers alike, Phyrexians even rival the Eldrazi for their destructive capabilities. For better or worse, it appears that the Phyrexians are back in MTG in Dominaria United. Since Dominaria United kicks off an epic four-part saga, we expect they might be skulking around for a while.

As one of Magic’s earliest villains, the lore of Phyrexians is vast and confusing. To try and simplify things in this article, we’re going to boil it down to what matters to prime you for what’s to come in Magic’s future. So without any further ado, let’s get into who precisely the Phyrexians are and what they do in MTG!

What Are the Phyrexians?

The Phyrexians are a race of Compleated creatures in Magic who’ve been tainted by Glistening Oil, known as Ichor. Initially, the first Phyrexians were created by Yawgmoth, Thran Physician, a human from Dominaria who was obsessed with Eugenics. In an attempt to cure a disease called Phthisis, Yawgmoth used powerstones to rid the Thran of the disease while evolving and mutating them. This would eventually lead to Yawgmoth going mad with power, continuing experimentation, and creating the first true Phyrexians.

Named after their home plane of the same name, Phyrexia, Phyrexians have risen to become one of the strongest forces in MTG. In the image of their god and creator, Yawgmoth, the Phyrexian faction is devoted to evolving and Compleating all life. This has made them a relentless force that pops up from time to time in sets and never seems to die out. Phyrexians can typically be identified by dripping Ichor, a lack of eyes, cysts, long gangly limbs, and a general sense of body horror.

The Phyrexians’ home plane of Phyrexia would come to be wiped out during an invasion of Dominaria. Despite this, Phyrexians haven’t been entirely eradicated. This is thanks to Karn, who created the artificial plane of Mirrodin and unknowingly tainted it with Glistening Oil. After corrupting Mirrodin’s keeper, Memnarch, while Karn was gallivanting around the multiverse, the effects of the Glistening Oil would spread throughout Mirrodin. This created the Mycosynth spores, which turned metal into flesh and corrupted organics into the next wave of Phyrexians.

What Are Phyrexian Praetors in MTG?

Introduced as Elesh Norn, Grand Cenobite, Elesh Norn is the leader of “The Machine Orthodoxy” religion. As the white Praetor of unity, Elesh Norn aims to create a unified theocracy through Compleating creatures and sewing them to the earth. Thankfully for those looking to go un-flayed, Elesh Norn has not been seen since the New Phyrexia set. Elesh Norn is considered the de facto leader of the Phyrexians.

Appearing in New Phyrexia as Sheoldred, Whispering One, Sheoldred is the leader of “The Seven Steel Thanes.” As the Praetor for the black Phyrexian faction, Sheoldred is the most traditional of the Phyrexian Praetor, caring only for slaughter and subjugation. Despite their focus on Yawgmoth’s warring principles, Sheoldred’s faction is currently the weakest. This is thanks to Phyrexian infighting, in which Elesh Norn devastated Sheoldred’s forces.

Unlike the other Phyrexian factions, Urabrask, the Hidden is far more accepting of other life. On Morradin, Urabrask even allowed the plane’s inhabitants to survive and dwell in its lair. Rather than caring for complete Compleation, Urabrask is instead concerned with building incredible Artifacts and Weapons. Recently, Urabrask appeared in Streets of New Capenna as Urabrask, Heretic Praetor. In this appearance, Urabrask surprisingly helped the planeswalkers Tezzeret, Vivian Rein, and Elspeth Tirel using Halo.

Debuting as Vorinclex, Voice of Hunger, Vorinclex is the most predatorial of the Phyrexian Praetors. Ruling over “The Vicious Swarm,” Vorinclex believes in the survival of the fittest so that the strongest emerge on New Phyrexia. Recently, Vorinclex appeared as Vorinclex, Monstrous Raider on Kaldheim; however, they have since returned to New Phyrexia.

What Are Phyrexian Mechanics in MTG?

Originally, Phyrexians were not explicitly named as such on Magic: the Gathering cards. Instead of having a dedicated creature type, Phyrexians were instead given creature types such as Horror, Zombie, and Minion. While some creatures were eventually given the Praetor creator type, it took until 2021’s Kaldheim for Magic to get its first official Phyrexian creature. Following this move, and shortly before the release of Modern Horizons 2, Phyrexian spells were finally given the errata they deserve. As a result of this, there are now 229 black-bordered Phyrexian cards and one silver-bordered Phyrexian card.

Alongside the visually striking artwork, Phyrexians also feature their own unique mechanics. Introduced in New Phyrexia, Phyrexian Mana is the most powerful of these mechanics. The Greek letter “phi” indicates that Phyrexian Mana can be paid with either two life or the corresponding mana symbol. This allows players more flexibility, as they can use their life to cast spells rather than just mana.

Alongside Phyrexian Mana, many Phyrexian creatures also sport the Infect ability. Introduced in Scars of Mirrodin, this ability is typically found on Black and Green Phyrexian creatures. The Infect ability is somewhat unique, as it makes a creature deal damage to creatures in the form of -1/-1 tokens, rather than traditional damage. Players are similarly afflicted with Poison counters. If players have ten or more Poison tokens, they lose the game.

What are Phyrexians doing in Dominaria United?

Currently, it is unclear precisely what Phyrexians are doing on Dominaria United. Despite this, there is absolutely no doubt that Phyrexians will be featured on the much fought-over plane. This is thanks to the spoiled Dominaria United card Evolved Sleeper. Sleeper agents were of immense importance in the first battle over Dominaria, so it’s no surprise they’re being used again. Evolved Sleeper abilities also show the progression from Human Cleric into Compleated Phyrexian.

MAJOR STORY SPOILERS AHEAD. Alongside Evolved Sleeper, story spoilers for Dominaria United have also revealed another major planeswalker will be Compleated; Ajani Goldmane. In this Compleated state, everyone’s favorite Leonin will kill Jaya Ballard. Thankfully, for fans of Ajani, it is possible the process of Compleation may be reversed. This is thanks to the Halo from Streets of New Capenna, which has angelic healing properties.

Read More: MTG Is Getting Its Most Ambitious Set In 2023