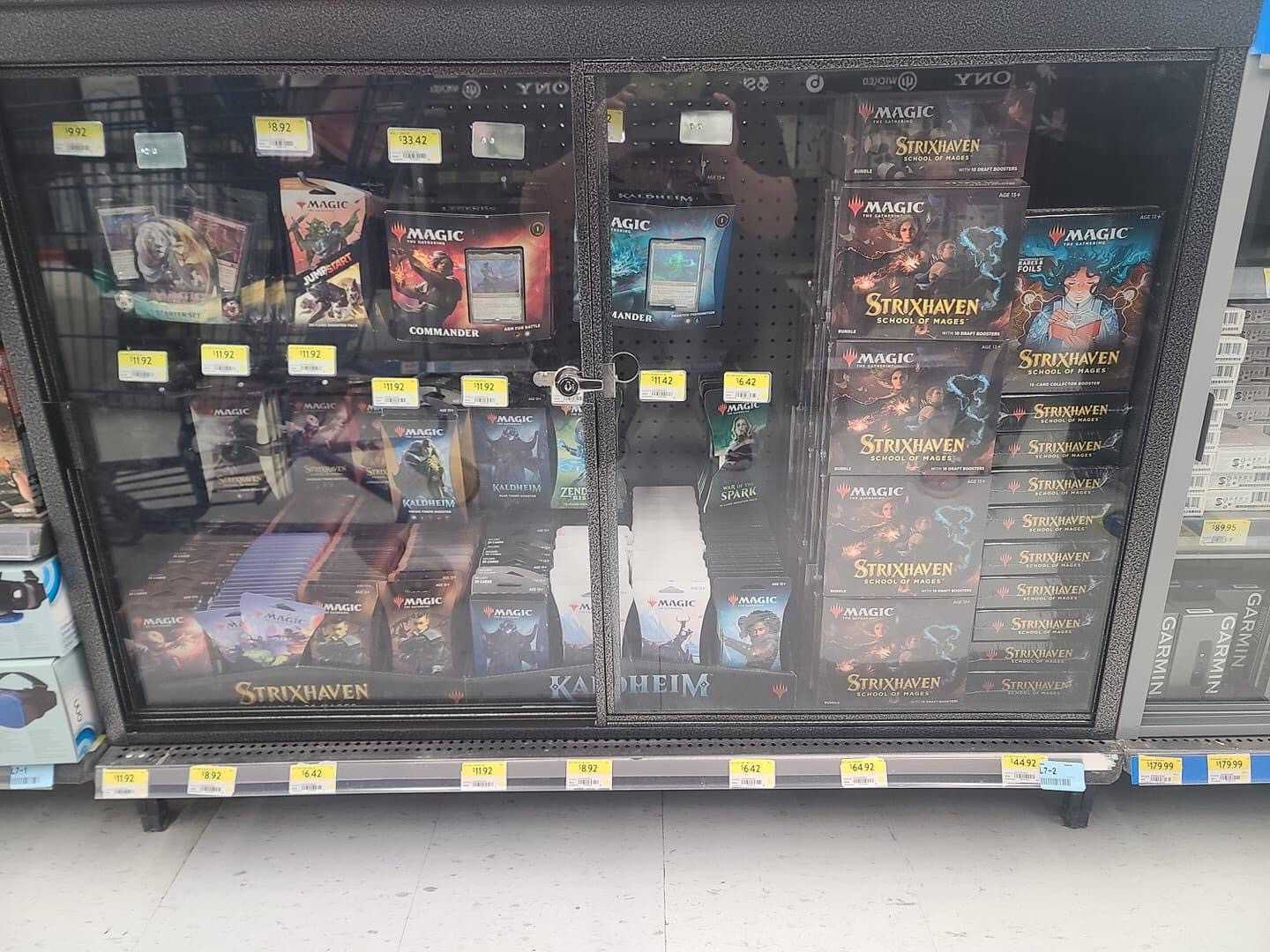 A new photo reveals a Walmart store locking away Magic: The Gathering cards in a display case, but are most locations doing this?

Earlier this month, we reported about Walmart suspending the sales of Magic: The Gathering and other trading card games, like Yu-Gi-Oh!, and Pokemon Trading Card Game due to “inappropriate customer behavior and increased demand.” However, based on several photos shared on social media, it looks like some locations across North America are still selling them, but one photo shows that Walmart is locking away MTG cards behind a glass display case.

In the Commander Community Facebook group, Stuart Bauer shared a photo of MTG products being locked away behind a display case, and they include Strixhaven: School of Mages Draft booster packs, Collector boosters, and Bundles, and the ready-to-play Jumpstart booster packs among others.

Check out the photo from Bauer:

Giant retailers like Walmart and Target usually display Magic and other TCG products in their own aisle in the cashier area, so anyone can just pick up a booster pack or any pre-constructed deck without asking an employee to get it for you, but it looks like the retailer is now taking measures to prevent theft. Of course, people stealing TCG from Walmart and Target is not fresh news (Last year, a “wizard” was caught stealing MTG cards in a Target store at Port Charlotte, Florida), but it seems to be rampant lately as demand for these types of products grow. Last month, I reported about how Target was limiting the sales of trading cards to 3 items per guest.

Bauer told me that this photo was taken in a Walmart located in Winkler, Manitoba, Canada, so we still don’t know if Walmart locations in the U.S. are doing this, but this is a better move than completely removing TCG products from their stores. However, the last time I checked my Walmart location last week, I still saw a few MTG products in the usual aisle, and others on social media have also seen them in the same spot. On Facebook, Stephan Karl Rutledge shared this photo from a Walmart in Fenton, Missouri still selling the latest MTG products (Apparently, a decision was also made since a bouquet of flowers somehow ended up here).

Another photo shared by Kevin Bernard on Facebook shows a more abundant supply, and this Walmart location is in New Glasgow, Nova Scotia, Canada.

While some people reported that their Walmart locations are still selling TCG products, there’s a number of commenters on social media who said that their locations have ran out or just stopped selling them. For the most part, it looks like the retail chain doesn’t have plans to stop the sales, but Target already confirmed that it’s suspending the sale of various trading cards, and there’s a number of factors responsible: The COVID-19 pandemic affected the production and distribution of cards, so stores have fewer to sell. Several local game stores have also been hit because of the in-store play suspension of sanctioned Magic events, but the good news is that starting on May 28, the suspension will be lifted off in the U.S.

Modern Horizons 2 Pre-orders are now Live! Here’s Where You Can Still Get Them!

If you’re having trouble finding Magic products in Walmart and Target locations, you may want to check out your local game stores near you, and we highly encourage you to support them. You can also order MTG products on Amazon.