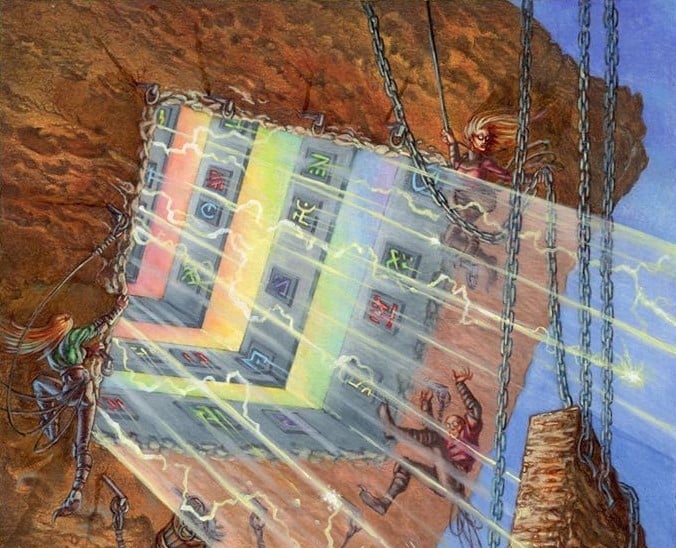 It’s no secret that Wizards of the Coast has been upping its product game for MTG recently. It seems that, as the years pass, MTG players can expect more and more choices when deciding what to spend their money on. There’s so much product that even Wizards of the Coast themselves doesn’t seem able to keep up. One product appears to have gotten lost by the wayside for almost a year. Here’s the story of the exclusive Secret Lair Heads I Win, Tails, You Lose Commander deck.

Heads I Win, Tails, You Lose

The Heads I Win, Tails, You Lose Secret Lair Commander deck was a product available for preorder around November 2021. While customers could choose to delay their product payment to January 2022, it wouldn’t do much considering how long it took Wizards of the Coast to start shipping out the product.

Earlier this week, Redditor the1gameaddict, a customer of the product above, released a chart of all the products that Wizards of the Coast had released before any word of successful shipment was given of the Heads, I Win, Tails, You Lose Secret Lair. There are a lot of things listed here, including seven sets (five of those having Commander decks) and 17 other decks.

In this thread, one particular Redditor took the initiative to leave a comment on their thoughts on the state of the product:

That shipment date used in this chart was like 5 months after the original order dates. The entire reason for that long of a timeline was to account for any supply chain delays.

I get it, I actually work in Supply Chain Consulting. It’s a hell of a job to have right now. In 2020 when things were insane, this would be understandable. This is not a supply chain issue, this has to be a major manufacturing oversight that WoTC did not consider and are now trying to scramble to fix.” – DECAThomas

Not only does this comment suggest that the shipment delay on this product may be even more severe than initially thought, it also points out that this delay may surpass the length of what should be called a “supply chain delay.” That’s great and all, but what actually happened?

What Caused the Delay?

While no one really knows what caused Wizards’ massive Secret Lair delay, most Redditors have come to a similar conclusion. Alongside a foiled-out 100-card deck with some unique artwork, this Secret Lair came with a coin. This was to be used to enable the coinflipping mechanics that this deck (and its name) are based on:

“The theory that makes sense to me is that there’s something up with the coin.

Supply chains can be hell, printing doesn’t always have to use the same print houses, sometimes there’s a learning curve. All of these potential issues are true. But judging by the successful shipment of other Secret Lairs, they have also all been addressed to some extent.

The only big differentiating factor I can see for Heads I Win, Tails You Lose is the coin.

Manufacturing unique accessories is the sort of thing that can cause huge hang-ups of a year or more. Finding new contractors that can meet your quality specifications, designing, manufacturing, manufacturing at scale, fulfillment, and shipping, all with multiple rounds of approvals, can take a while for a company that already takes 6-24 months to get its flagship products out the door.

So if it’s the coin—okay, I can see why there might be such a delay. WotC’s not a coin company. They’re not a glue company, either, and we all saw what just happened to Unfinity.

That being said, this is not to excuse WotC. I just think we need to seek accountability in a way that accounts for the potential manufacturing snafu.

For example—the Unfinity issue was resolved with only a six-month delay. Why isn’t that muscle being applied to an egregiously late Secret Lair?

Assuming I’m right about the coin, they must have explored options that involve solving the issue without the coin, and decided against them—why haven’t we received a statement explaining those choices?” – Radiophage

Radiophage makes the deduction that, since other Secret Lair products released after Heads, I Win, Tails, You Lose have been released without an issue, the problem likely lies in what makes this Secret Lair unique from the others. The coin promised as part of the product is expected to be what that unique thing is. Once again, there is no confirmation as to whether this is the truth, but it is what most MTG members think the problem was. Fortunately, since this Reddit post started making its way through the community, MTG members have received an update on a perceived shipping date for this product just this morning.

Our previous Redditor returns with a new post regarding an email received from Wizards representatives after his other posts had made rounds in the community. It looks like they will finally ship this nearly-year-old product on October 24 this year. Well, more specifically, they “are expected to enter the shipping process on 10/24, Monday after next.” As pointed out by Redditors in this thread, that is an important distinction:

“”Entering the shipping process” = some customers will only receive their decks after Thanksgiving.” – Hmukherj

“Europeans will get it sometime in December” – 5edu5o

“Australians due to receive it some time in 2024” – Ratgay

While customers will likely still have to wait some time to see their Secret Lairs ordered last year come to light, this information is better than nothing at all.

It’s not difficult to see that a near-year delay with minimal communication can raise some red flags. Wizards of the Coast did take the initiative to send Heads, I Win, Tails, You Lose Secret Lair customers a few Collector Booster packs to apologize for the major delay.

“In the email I got about the delay on secret lair on Heads I Win, Tails You Lose it said they would be sending out 2 NEO collectors boosters in a separate wave of shipping to make up for the delay.” – TinTitan88

As mentioned above, these manifested as Kamigawa: Neon Dynasty Collector Booster packs. This set has aged relatively well, with multiple staples like Boseiju, Who Endures, and The Wandering Emperor having relevance in older formats. These packs were shipped out in July of this year.

One last secret related to this product has remained throughout its year-long hiatus: what is the Bonus Slot for this product? For those unfamiliar, Secret Lair products generally come with a Bonus Slot, commonly featuring cards that went unannounced. This results in some incredibly expensive favorites with exclusive art, as well as some poorly judged full-art cards that end up being extremely common. Redditors are hoping that the elusive card ends up being a Mana Crypt. This multi-hundred-dollar Commander Staple interacts with coin flipping which matches the deck’s theme. Most players, however, believe it to simply be a Basic Mountain. Whatever the card, I hope the reveal will be worth the year-long wait.