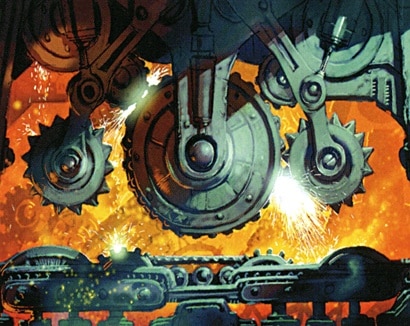 Even though Phyrexia: All Will Be One cards have driven the marketplace into disarray, some MTG artifact cards have continued rising in price in the background. While the cause for these price spikes has varied dramatically between sources, it’s undeniable that, since the release of The Brothers’ War and the rise of Underworld Breach on the secondary market, artifacts have been a massive force in various MTG formats. Here are the artifacts breaking financial headlines, and why they’re spiking in price!

While this may look like a Commander card at first glance, Grinding Station has actually seen a massive uptick in price as a result of Underworld Breach’s popularity in Modern. Grinding Station, Underworld breach, and Mox Amber plus a win condition like Thassa’s Oracle and Grapeshot have dominated the last few months of Modern. While that strategy is starting to fall off now, MTG streamer Aspringspike came up with a fancy brew this week that highlights Grinding Station once again. This artifact-heavy combo deck tries to assemble two Myr Retrievers in hand or graveyard with Grinding Station and Semblance Anvil (imprinting an artifact) on the board. You can mill your opponent’s deck out through this loop by cycling Myr Retrievers.

Grinding Station’s rise to fame has been monolithic, and it doesn’t look like the card is cooling down anytime soon. A year ago, Grinding Station was worth about $10. This is mainly due to it having only one relatively rare printing from Fifth Dawn. Outside of its recent competitive prominence, the card is also a powerful combo tool in Commander.

Grinding Station saw a huge uptick in price in October following Underworld Breach’s first major appearance in competitive Modern when MTG player Ross Miriam won an SCG open. This caused Grinding Station to rise from $15 to $26 over the course of a week.

Since early October, Grinding Station has seen a consistent increase in price as people slowly began to realize just how powerful the Underworld Breach combo deck was in Modern. The card has continued to rise in price from $26 to $31 in early January. Following Aspiringspike’s new brew and a very strong showing of a new Temur Breach combo archetype in NRG’s championship event, Grinding Station is selling for around $38, quickly pushing towards $40. Notably, stock Breach lists nowadays are no longer combo decks, but combo variants of the deck are still thriving and strong, as demonstrated by the Temur variant of the Grinding Station combo deck that appeared at the NRG championships.

As far as grabbing a Grinding Station goes, I think this card could be reprinted in the near future. This makes picking up the card very risky. If the card is reprinted in a Secret Lair, it will likely regain its value after some times passes. That said, if you want to play some of the best combo decks available in the Modern format, this may simply be your bar to entry.

It took a bit of time for Cityscape Leveler to increase in price, but once things started rolling, this card saw, and still sees, play in Standard, Commander, Modern, and Pioneer. Leveler’s transition to Pioneer was almost immediate, as it was a direct upgrade to a Karn, the Great Creator wishboard in Mono-Green Nykthos. The Leveler then started to see play in Standard, off the back of an Izzet Artifact Ramp archetype, and saw play in Modern Tron as a response to the popularity of Izzet Murktide decks.

Myr Turbine’s explosive spike marks the rebirth of a historically beloved archetype: the Myr. Unlike the previous two artifacts in this article, Myr Turbine’s spike is relatively recent, and it’s due to something that we reported on recently.

A leak for Phyrexia: All Will Be One has revealed new Myr support targeted for the Commander audience. While we won’t talk about this card here since it’s not an official spoiler as of the writing of this article, you can find more out about the card in our coverage of the event here.

This card’s spike looks ridiculous, especially considering it is seemingly based on an, admittedly, very believable leak. Myr Turbine was worth $3 a week ago, and has taken off to $16 in seven days. If you managed to cash in on the hype, there’s a lot of money to be made here. I otherwise hope you’re not a Myr fan because I do not think this card will retain its price. I would wait to purchase this card unless you’re willing to lose a little cash in the long run. If you’re looking to sell this card, I would also remain a bit, as Myr Turbine’s spike does not look like it’s quite over yet.