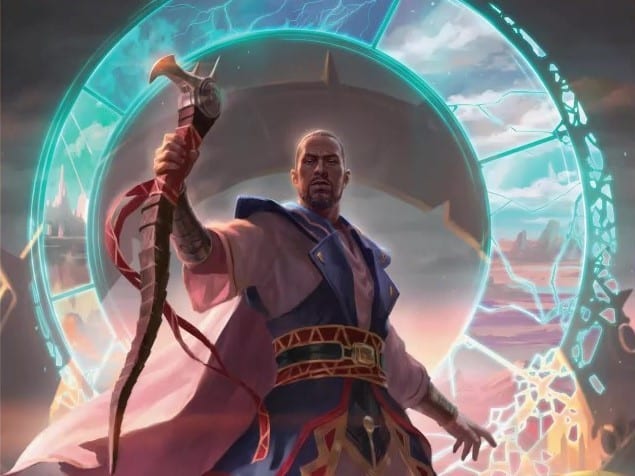 Price movements for this week can be summarized pretty quickly: there are two essential things fueling market movements for the week: tribal synergies being absurd in Dominaria United and Pioneer. The Planeswalker in question is a Standard legal one, but its presence in Pioneer almost entirely causes his movements. Teferi, Who Slows the Sunset, has seen massive gains in the past few weeks! Perhaps more interesting is speculation we’ve cooked up that may signal a new price increase in the coming weeks.

Teferi, Who Slows the Sunset is the new hotness for Mono-Green Devotion decks in Pioneer. Generally, Teferi is now replacing the slots that were Nicol Bolas, Dragon-God, and Nissa, Who Shakes the World. These Planeswalkers are used to create extra untap abilities to continuously float mana with Nykthos, Shrine to Nyx, but Teferi does this job better. Not only can you continuously untap lands, but you can also gain two life per activation, allowing you to successfully go infinite and mill your opponent out with Restorative Burst loops a lot faster. Because Teferi can untap both The Chain Veil and Nykthos simultaneously, it dramatically accelerates the rate at which Mono Green can unlock their infinite win condition.

The most significant increase financially comes from the Double Feature version showcased above. We’ve mentioned time and time again that this set may be a major sleeper in terms of value, and this is just another example of why. Teferi, Who Slows the Sunset’s spike is still incredibly fresh, but NM copies sell for as much as $20! Considering its market price is still around $9, it’s easy to see the massive increase here.

Teferi’s original version from Innistrad: Midnight Hunt has also significantly increased. The market price for Teferi about three weeks ago was about $3. Nowadays, a copy of Teferi will run you about $9 on average. These spikes are still occurring daily, so Teferi’s rise may not stop soon.

Alongside Teferi’s rise to relevance, The Chain Veil has also seen consistent price increases over the past few months. Three months ago, this card’s price tag was around $15, bottoming out at about $13 over the past year. Back then, The Chain Veil primarily only saw play in Commander decks. Every single Superfriends deck will want a copy of this, as the potential power boost offered by Liliana’s signature weapon is immense.

That being said, now that Mono Green Devotion players also want a Chain Veil, the price has risen to about $21 on the lower end of things. It seems like The Chain Veil goes through inconsistent bubbles where it sells for as much as $40. These price spikes seem incredibly inconsistent and somewhat engineered. Unless this becomes a consistent price across all sources, if you are in the market for a Chain Veil, try to aim for a price around the $20 mark. This should be yet another reminder as to why doing your market research is essential to make your money go the mile.

A new episode of Game Knights dropped yesterday. Past price movements show that this content creator can have substantial market implications for Commander. Some cards in the last Game Knights had huge impacts, but Kederkt Parasite was the sleeper card that stood out. Combined with Tor Wauki, The Younger from Dominaria United Commander, Josh managed to deal a ton of damage to his opponents by drawing cards.

This card has already seen a very slight price increase only one day after the video was released, nearing $10 for near-mint copies. The more notable tell for a potential spike here is a mass increase in copies sold. Kederekt Parasite was only selling a couple of copies per day but sold over 20 (for only ONE of its printings) copies yesterday and is looking to compete with that number again today as of the writing of this article. If you’re interested in this card, pick it up ASAP.

With Regional Championships nearing competitive players’ attention, Pioneer may continue to see a spotlight in market drive for the coming days. As a new Game Knights continues to enter the player’s contemplation, any interested in some of the cards showcased may want to buy those cards sooner than later. I am sure we will get some of these cards are going to spike – the question is: which ones? Should there be any relevant market movements, you’ll undoubtedly hear from us!