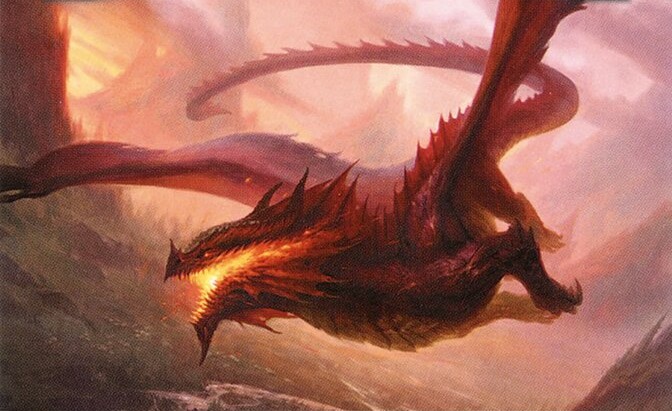 Dominaria United Prerelease spikes are in full force, and the most significant spike covered by multiple market watches looks sketchy! We actually mentioned this card just a few days ago, and that attention allowed us to notice a questionable pattern with this card. This involves a particular sale that was more than quadruple the card’s MSRP. This sale presents an opportunity to demonstrate a case study behind some more dishonest marketplace spikes. If you’re in the market for a Klauth, Unrivaled Ancient, make sure you do your research!

It is not secret at this point that Klauth, Unrivaled Ancient is incredibly powerful in Commander. Featured on the Command Zone in Ashlen Rose’s Ur-Dragon deck, Klauth is capable of hitting the board and immediately generating a ton of mana. Dominaria United is also pushing many cards that could synergize with Klauth. From the hyped-up Jodah, the Unifier, to Rivaz of the Claw, Klauth enthusiasts have a lot of new toys to play with.

From early June-July, Klauth was averaging out around $5. Only 48 hours from the writing of this article, Klauth was pushing the $20 mark. Fast forward to now, and Klauth is beginning to push $30 in average sales. Even though this is the case, many market watches are covering this spike to as high as $45 in average prices. The alarm bells start sounding when you consider one particular sale we mentioned in our last finance article is brought to light. This is why, if you’re in the market for Klauth at the moment, you really need to make sure your price is a fair one.

In addition to highlighting the outlier in recent sales, this snapshot of Moderately Played Klauth also highlights just how severe the spike to Klauth sales has really been. Only two days before the writing of this article, a Moderately Played version of Klauth sold for $100. This was also the last instance where Klauth saw some attention from us, and we mentioned that this particular sale might throw the market averages off. Signed cards on the MTG secondary market are considered Moderately Played at best. As a result, this $100 Klauth was most likely signed by a notable party, but we have no way to confirm this. While Klauth looks like a fantastic card when paired with many of Dominaria United’s cards, it is rather suspicious that Klauth saw a $10 increase only 24 hours after this sale was recorded.

The problem with a market average spiking due to an outlier sale is that it can create a false spike. Once demand goes down due to Klauth’s sudden spike, the card has a higher risk of crashing incredibly hard. Anyone who bought Klauth at its elevated price stands to lose some money as a result (should this happen).

Honestly, in the grand scheme, $20 lost on a hype train is not the end of the world. If one tends to make market purchases on cards going through similar spikes, the losses can add up. The purpose of outlining a trend like this is to encourage readers to research the initial market for cards they are interested in before making a purchase. One good investment won’t save a lot of money, but multiple good decisions can add up quickly. Take this, therefore, as a case study of what could be. For all we know, Klauth’s demand may not slow down, and it could stabilize at $40 a piece.

Here, we have a screenshot of TCGplayer’s most recent sales of Klauth, covering all of the sales from the 31st onward. The actual spike for this card occurred on the 30th, shortly after our article covering the card in passing (the focus was on zero mana artifacts like Jeweled Lotus and Mana Crypt, which have continued to increase). If you are looking for a Klauth at the moment, a price around $29 should be what you’re gunning for at the highest. Considering that some market averages assess this card for as much as $45, this suggests there will be higher listings than $29.

Is Klauth a Good Purchase?

Klauth is a powerful MTG card that can easily up your Commander game. The question right now is more so if the price you’re spending to buy Klauth is actually worth it. Because of the strange nature of these spikes, there is a good chance that Klauth will stabilize and drop in price shortly. That said, there is a lot of uncertainty. Klauth could behave like Ledger Shredder, a sleeper card that saw a considerable price increase when players realized the card had huge potential. In that case, there is the chance that Klauth’s increases may continue, but this is less likely. Whatever you choose to do with Klauth, this example of MTG market fluctuations makes for a great case study of why doing your research is essential. Here is another example of potentially dishonest market manipulation.