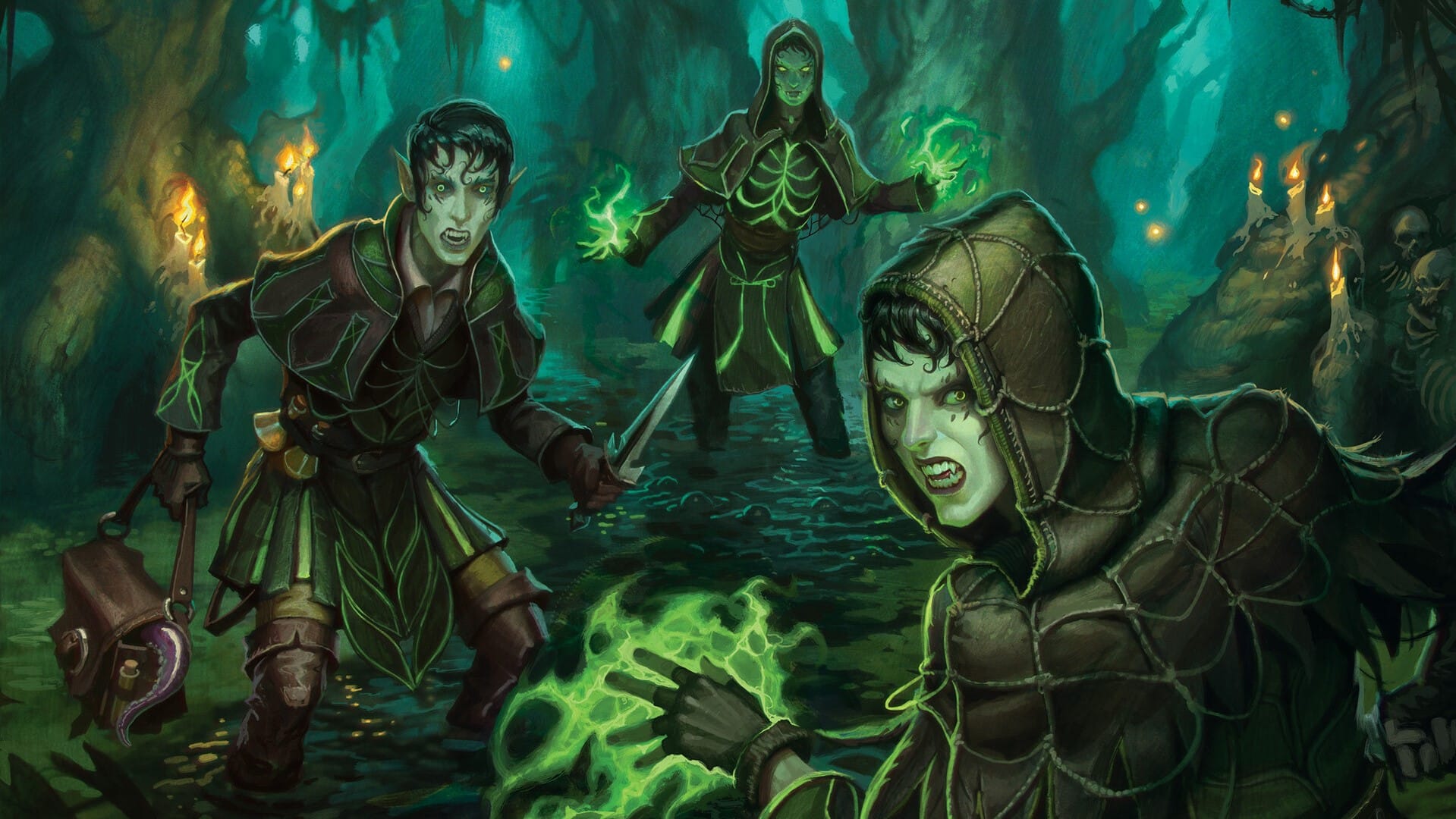 Should There Be A Witch Creature Type?

Innistrad: Midnight Hunt introduces us to new mechanics, new legendary creatures, new powerful spells, and plenty of excitement. The new mechanics are all interesting twists on ones we know and love too, with decayed feeling a bit like undying, and disturb being a fascinating new way to unearth a creature.

We’re also about to mess around with the coven mechanic, one that triggers if you have three creatures with different powers under your control. It’s going to be a tricky one to manage, because there’s a lot of good removal around now, but that’s not what we want to talk about. Instead, we’ve come to ask why there are no witches in Magic: The Gathering.

What is a coven?

So, first of all, why are we talking about witches? Well, a coven is a term used to describe a group of witches. The general theory states that a coven needs at least three to be considered a coven, although they would often consist of twelve or thirteen witches.

Twelve was considered with the devil being an honorary thirteenth member, to mimic Jesus and his disciples, and thirteen was the same, though with the absence of the devil. The latter was promoted by Margaret Murray around 1921, which is when the term came into the more common lexicon.

As we’re in less God-fearing times, the idea of witches has evolved substantially, and while you’re not likely to see any flying around on brooms, there are still some who consider themselves witches who apparently deal with hexes. Anyway, the phrase coven is undoubtedly linked to witches, and it’s odd that there are none on Innistrad.

Witches in Magic: The Gathering

Now, if you’ve been playing Magic for a while, you’ll already know that there have been witches in MTG, but it turns out that there’s never actually been Witches in MTG, and that’s a bit odd. Take, Accursed Witch, for example, from Shadows over Innistrad. They’re a Human Shaman. There are a few Human Shamans with the Witch in their name, but it’s not the only typing.

Alongside those, there are also Human Spellshapers, like Bog Witch, Human Wizards like the Caligo Skin-Witch, Human Shamans like Bitterheart Witch, and even Human Warlocks, like the some of the new Innistrad: Midnight Hunt creatures like Candlegrove Witch. There are then other species who dabble in witchcraft too, like Vampires, Elves, Goblins, Elementals, and even Treefolk.

There are even a couple of Human Cleric witches too, which seems like an unlikely pairing, and signs that the Clerics aren’t always holy, and sometimes become corrupted, especially as two of these are Blood Witches, which isn’t exactly what we’d call friendly. None of these is witches, even though that would fit well within MTG, and it feels a bit odd.

Where are the witches?

There are many creature types within the covens of Innistrad: Midnight Hunt. There are Peasants, Druids, Warlocks, Knights, Soldiers, basic Humans, Nobles, and even Angels. It seems that coven on this plane isn’t always about magic as such, but merely about being part of something that allows you to fight back against the horrors of Innistrad.

However, that’s not to say that witches aren’t present here, not at all. Leinore, Autumn Sovereign has the flavor text of “She keeps the festival’s revels from faltering, infusing the witches’ rituals with hope.” This explicitly mentions witches, and while Leinore is part of the new Commander decks, rather than the actual set, that doesn’t change the fact that she’s a part of the lore.

Basically, everything points to the idea that witches should be Witches in MTG, and we’re a little perplexed by the fact that this isn’t the case. We’re assuming part of this is due to how much effort doing a big old errata to the older cards would be, but given how varied the creature types are that are part of the coven, it almost just feels like Wizards has something about witches in particular. Maybe they’re cursed, or they’ve been picked up as part of anti-witch campaigners? We’re not really sure, but we do feel as though Witch should be a creature type in Magic.