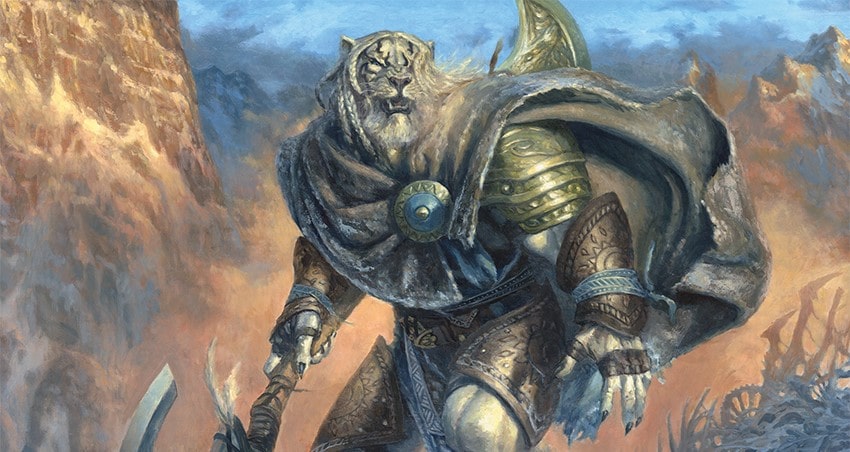 New Dominaria United Spoilers May Change MTG as we Know it!

Dominaria United is penned to come out in early September. Lately, MTG has had a sort of ‘endless’ spoiler season, with new cards or new treatments to cards getting previewed constantly. That being said, it’s been quite a while since we have heard anything about MTG’s next core set. There’s a lot of information expected to drop this Thursday at the Wizards Presents. Until then, we were not expecting to hear anything about the new set. Mark Rosewater has given some Dominaria United spoilers on Blogatog, and they are so massive that MTG may be changed as we know it.

With the release of Dominaria United, MTG will be getting yet another evergreen counter. The impact that this could have has a lot of room for variance. Since the counter is evergreen, it is safe to assume that it will return in future sets, pushing aside a corner case counter like the corruption counters that Geyadrone Dihada makes.

A recent counter that was introduced into MTG that may make for a better example of what a new evergreen counter may look like is a shield counter. While these may end up being exclusive to New Capenna, shield counters can prevent damage dealt to (or the destruction of) a creature once. Keyword counters introduced in Ikoria (trample counter, vigilance counter, etc.) could be another example.

A Popular Planeswalker Card Gets a Reprint

This teaser is rather exciting! The opportunity for potential players to get a strong Planeswalker for cheap is something that everyone can celebrate. With the information that we have now, we should be able to narrow down some of the candidates for this reprint. It’s safe to say that this reprint will be a Planeswalker that we know is on Dominaria. We can also eliminate Jaya since she already has a Planeswalker card spoiled for the set. A card that this may indicate could be Teferi, Hero of Dominaria.

The only worry is that specific Planeswalker may be too powerful for the Standard format. Teferi, alongside The Wandering Emperor, also Standard legal, makes up a surplus of control strategies in older formats. It’s not a vast stretch to speculate that this strategy would be oppressive in Standard. Don’t even talk about Teferi, Time Raveler. That card is way too powerful for Pioneer, let alone Standard.

According to the story leak seen at the end of last month, the Planeswalker is unlikely to be Ajani. Liliana has a good amount of popular printings. Still, the first ones that come to mind (both of her three mana iterations) were recently printed in Double Masters 2022 and may also be too powerful for the Standard format. This still leaves Karn as a potential Planeswalker. While Karn, the Great Creator is noteworthy for an infamous reason, Karn Liberated could be another possible candidate for Dominaria United. This Planeswalker is popular in Modern Tron builds, is powerful, and has a high mana value, making it potentially more balanced in a Standard setting. This is our pick for the most likely Planeswalker to see a reprint according to this tidbit. Karn, Scion of Urza is another somewhat popular Planeswalker card that fits this spoiler’s criteria.

Rosewater has previewed a blue card with ‘Destroy all Creatures’ in its text will be present in Dominaria United. This is, frankly, besides potentially being a monumental shift in the color pie, terrifying for anyone who is not a control player. Control players have had to splash into different colors to address the lack of hard answers in blue outside of counterspells. If blue gets a board wipe, it could raise the efficiency of control strategies to an entirely new level! Now that they won’t have to consider board wipes in their splash plan, they can prepare more robust and consistent strategies with fewer limitations.

Rosewater specifically stated that there would be “a five mana value creature that can be a 10/10.” This means that the creature will likely have a stat line dependent on outside factors. Think of something like Tarmogoyf, whose stats are determined by the number of card types in players’ graveyards. These cards have the potential to be incredibly powerful if the requirement for stat boosts is minimal. Since the card’s mana value is five, it will likely come with additional keywords, like Trample, to complement its huge stat line. Regardless, these Dominaria United spoilers have a ton of potential.

It sounds like only one card in the set will grant Poison counters, but Poison will be returning to Dominaria United! We mentioned previously that Infect is a popular Phyrexian mechanic, so its return is exciting but not entirely unprecedented. Rosewater specifically avoids ‘Infect’ in his spoiler here, so we may expect something similar to Fynn, the Fangbearer from Kaldheim.

Most Lotus Artifacts have, at worst, seen a decent amount of Commander play. This should ensure that a powerful mana rock is coming in future Dominaria United spoilers. Dominaria had Gilded Lotus, so that we would expect something of a similar power level.

Something that Gives All Vehicles Crew 1

Players are always looking for ways to crew their gigantic one-mana vehicles, and this card may be exactly what they were looking for! This card’s effectiveness will highly depend on its mana value and any other hoops it may have players jump through to use it. It may share some similarities with Sigarda’s Aid for it to be really broken.

On a side note, those considering playing Consulate Dreadnought with this new card may want to buy these quickly. This card seems prime for speculative buyers right now.

Like all of the exciting abilities on this list, its power level will heavily rely on its mana value. If something like this is available at three mana, it will see some play. Even more so if the card has additional effects like Hidetsugu Consumes All. This card will likely be relegated to sideboard status in Standard at four or more mana.

Izzet decks like small instant and sorcery spells. Between Phoenix in Pioneer, Murktide in Modern, and Delver in Legacy, a card that cares about small instants and sorceries could be played everywhere. However, developers should be keenly aware of this, so we wouldn’t be surprised if this were on a 3-4 mana value Legendary creature aimed at Commander play.

A Popular Character Finally Gets a Printing

Judging from recent Dominaria United lore, the most likely character to fit with this clue is the Raven Man. This character was a leading force in Liliana’s development as a character. He recently revealed his true identity, which is a big deal. If you want to learn more about the Raven Man, we recently outlined his history.

This is Just the Tip of the Iceberg

• a popular planeswalker card gets a reprint

• a blue card with “destroy all creatures”

• three original Weatherlight crew members are in the set

• a card that grants poison

• a new artifact with Lotus in the name

• “As long as enchanted creature is legendary”

• “You may exile an instant or sorcery with mana value X or less from among them.”

• “exile each nonland permanent with mana value 2 or less”

• “Enchantment creatures you control have”

• “For each opponent who doesn’t, that player loses 2 life and you draw a card.”

• “instant or sorcery card with mana value 1 or 2”

• “Vehicles you control have crew 1.”

• “where X is the number of legendary creatures you control.”

Rosewater then reminds readers how monumental the Wizards Presents event occurring this Thursday will be. We’ve already outlined everything you need to know before the event, but we will also cover the event’s details for those who miss it. Make sure to keep your eyes here for future Dominaria United spoilers!