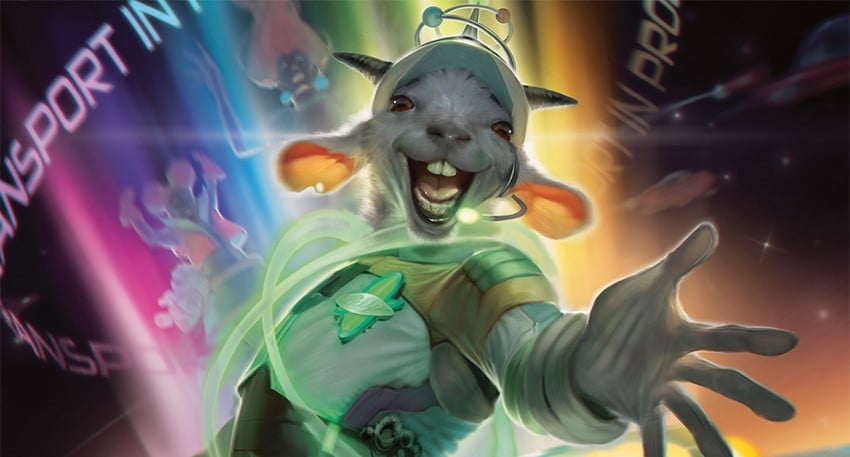 Following the release of Double Masters 2022, Wizards of the Coast had a moment of reprieve. Endless spoiler seasons have been on players’ minds, and some prominent personalities had things to say. It looked like we would have a more significant chunk of time for a few weeks without any spoilers being announced. As of today, alongside the Dominaria United stream announced earlier today, we know that Mark Rosewater will be leading our first look at Unfinity this weekend!

For those Acorn enthusiasts (and Commander alike) looking to get a front-row seat for Unfinity’s latest updates, you can do so in San Diego. Mark Rosewater will discuss Unfinity at his San Diego Comicon panel this Saturday. While we do not know what exactly Rosewater will reveal, the new sticker mechanic will likely be mentioned.

Will This be Online?

While we have no confirmation whether this will be made available online, last year’s MTG SDCC panel was made available on multiple platforms. Wizards of the Coast streamed Mark Rosewater’s panel on Twitch live. SDCC also recorded most of its content and uploaded it on Youtube. That being said, last year’s SDCC was mostly (if not completely) online due to the pandemic. With Covid restrictions essentially being wrapped up, there will be a physical presence to the SDCC Comicon this year. Because of this, we are unsure whether Mark Rosewater’s Unfinity panel will be available digitally.

Unlike the Dominaria United set, which has a stream scheduled this Thursday, we already have some contents from Unfinity spoiled. Unlike past silver-bordered sets, Unfinity is dropping the silver border altogether and is using a different categorization system. Since this is the first ‘silver bordered’ set to introduce Eternal-legal cards, an Acorn Security Stamp will be used to identify cards that will not be legal in Eternal formats.

We know there will be some potent Commander cards in Unfinity. Saw in Half is an incredibly versatile Instant that doubles as a combo piece and protection against targeted removal. Being able to Saw in Half a crucial creature in response to a Path of Exile will not only waste your opponent’s spell but also create two copies of the crucial creature! The most obvious card to do this with is the recently reprinted Double Masters 2022 Mythic Dockside Extortionist. This card exhibits a high price point solely because of its Enter the Battlefield effect. Imagine getting the first trigger, then immediately getting two more from Saw in Half! If this is something that interests you, consider picking up Dockside Extortionist soon, as Mythic Rares from Double Masters 2022 are seeing significant price increases.

Silver Bordered sets have traditionally displayed beautiful art pieces on Basic Lands as a driver for purchasing the product. Unfinity is no exception. While multiple beautiful Basic Land arts are available, Unfinity will also have Shock Lands to offer! Like the Sacred Foundry above, these artworks are stunning. Not only will you be able to find these great inclusions, but you can even obtain them in a new style of foiling! Want more information? We covered everything that we know so far here.

Will you be Live?

Will you take time out of your weekend to join Mark Rosewater for these Unfinity previews? If not, no need to worry! We will be there to ensure you can find the juiciest information MTGrocks! Hopefully, whatever is to come will stand to excite MTG players without overwhelming them.