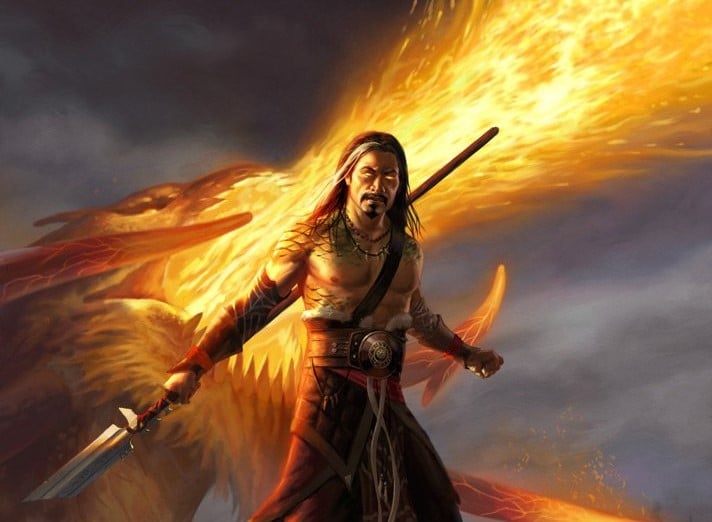 Of all the card types currently available in MTG, Planeswalkers have been around for the shortest time. Because players can choose to attack Planeswalkers instead of players, you need an excellent reason to play them in a multiplayer game. Instead of only having one enemy to worry about, you have to fend off three different players whose best interest is to have your Planeswalker die. Because these cards underperform, however, many MTG EDH players will not pack direct removal that targets Planeswalkers. This opens a small opening that can be exploited if the payoffs are worth it. There are some incredibly powerful Planeswalker effects in Commander, and we’re here to show you which of these Planeswalkers may be taking it too far!

Sarkhan is a particularly popular Planeswalker in Commander. Its plus ability is strong, allowing for some card advantage and mana fixing. What puts Sarkhan apart from the rest, however, is its ultimate ability. There is very little that a Commander player would like to do more than flip through their deck and slowly and monotonously dump an entire arsenal of Dragons onto the battlefield. While this is fun for you, it may not be the most enjoyable thing for your opponent to watch you slowly pick cards out of your library. If that doesn’t scream EDH, I don’t know what does. Not playing Dragons? Sarkhan’s plus ability is decent, but there’s probably a better card out there.

Any card that has a ‘Win the Game’ effect in its text is bound to see some Commander play. Between Laboratory Maniac and Thassa’s Oracle, Commander’s most common alternate win condition generally has something to do with your library being empty. Cards like Demonic Consultation can magically make your library disappear, allowing Jace to swoop in and win the game out of nowhere.

Unlike our Honorable Mention, Tezzeret offers potent abilities that can be applied to various strategies. Tezzeret is a ridiculous mana sink, allowing to untap two artifacts as its plus ability. Tezzeret can also search for artifacts from your library and put them into play. Whether it’s a mana rock or a win condition like Aetherflux Reservoir, Tezzeret has many different uses. His ultimate is lacking compared to Tezzeret’s other abilities, but it can be used to win the game in a pinch after some players have already died.

This Planeswalker has the highest mana cost of all the Planeswalkers on this list and arguably the highest cost of all the Planeswalkers in the game. Even with this restraint, [/tooltips]Nicol Bolas, Planeswalker[/tooltips]‘s Loyalty abilities make the wait worth it. Ironically, Nicol Bolas’s ultimate is the least impressive on this list. While it’s still the most powerful ability, the cost makes it lackluster since it only affects one opponent. The +3 ability is capable (most of the time) of dealing with the most impactful permanent on the board. If that permanent happens to be a creature, Nicol Bolas can -2 and steal it instead. Even better, your opponent won’t be able to return their Commander to the Command Zone in response to this, allowing you to hold it hostage while continuing to impact the board with Nicol Bolas, Planeswalker. No one likes having their Commander taken away from them for extended periods.

Commander is a format where significant splashy effects are at their best. What better big flashy effect than an eight mana Planeswalker? Ugin can take down key threats as a plus ability, wipe the board while leaving its caster ahead, and flat-out win a game of Commander if opponents allow it to ultimate (or it resolves with a Doubling Season in play). Ugin also has its place in constructed, being a staple win condition in Modern Tron decks. This is a fantastic way to significantly impact a Commander board state if you can get it out. Compared to Nicol Bolas above on this list, Ugin’s plus ability is considerably worse. Ugin does make up for it, however, by being much easier to cast and having two other abilities that are incredibly powerful. With this Planeswalker recently seeing Standard play, many more casual MTG players have a less than favorable opinion of this walker.

Teferi, Master of Time is the Planeswalker that gets the most considerable boost in a game of Commander compared to a game of Constructed. Because Teferi, Master of Time can activate its abilities at instant speed, you essentially get two extra activations on each table rotation. This not only allows you to filter your had a fair bit with Teferi’s +1 ability, but it also allows you to phase nasty creatures out more often and reach your Ultimate faster. The only reason there are any Planeswalkers above this one is because their creation is considered by many to be a mistake in every environment. From this point on, the Planeswalkers being addressed are incredibly powerful. Please seriously consider the power level of your table before you bring these.

One commonality with every Planeswalker from this point on is that they’re all going to cost three mana. Three mana Planeswalkers have a history of impacting formats significantly whenever their abilities are up to snuff. Commander is no exception.

Dack Fayden is significantly weaker than the Planeswalkers above it on this list. His plus ability is fine since most Commander decks can take full advantage of Faithless Looting’s ability to smooth one’s hand while setting up Graveyard effects. Where Dack really gets to shine is its -2 ability. With the massive amount of mana rocks present in Commander, Dack generally ends up stealing a Sol Ring or something of the like. This is an incredible effect for three mana, as you get to ramp yourself ahead while denying your opponent the same amount of advantage. Suppose you manage to Ultimate Dack; it’s incredibly powerful. When putting it into the right deck, Like Hinata, Dawn Crowned, a Dack Emblem can result in taking control of your opponent’s entire board state. Have fun watching your opponents tilt off the face of the planet if you pull this off.

Ashiok isn’t oppressive like the Planeswalkers above it on this list, but it does stop your opponents from doing unjust things. Ashiok can shut down both Tutor effects (the most potent ability in Commander) and Graveyards for the cheap cost of three mana. To make things even better, the Tutor shutdown is a passive ability, meaning it’s always active. Because of its ability to shut down oppressive play patterns without being oppressive itself, Ashiok, Dream Render is one of, if not the most commonly played Planeswalker in Commander. If this card makes you salty, chances are you deserve it.

People already have a genuine dislike of wheel effects in Commander. Wheel effects refer to a card that makes players discard their current hand to draw a new one (inspired by Wheel of Fortune). Narset, Parter of Veils is one of the many cards in Commander that ensure these wheel effects turn into something disgustingly one-sided.

Card advantage is more relevant in Commander than in other formats because of how long games tend to go. This makes Narset, Parter of Veils’ static ability incredibly toxic. By allowing your opponents to draw one card max each turn, Narset cuts off an opponent’s ability to keep up with its owner’s card advantage. To top this all off, like all of the Planeswalkers from here on out, you get this insane payoff for only three mana. Fortunately, Narset’s Loyalty abilities leave something to be desired compared to its position on this list. In a void, this is definitely one of the saltiest Planeswalkers out there.

This isn’t even the end of it. Due to the recent release of Displacer Kitten, Teferi has become even nastier. As long as Displacer Kitten and Teferi are on the board together, you can go infinite with any mana positive mana rock. This will probably happen a lot, drastically increasing the salt meter on Teferi, Time Raveler. Kill this on sight when it resolves. Otherwise, you’ll regret it.

Oko commonly comes up in any discussion regarding what the most powerful Planeswalkers ever released in MTG are. After his ban in multiple competitive formats, players are convinced that Oko was a significant oversight on R&D’s part. As discussed earlier, Planeswalkers that cost three or fewer mana already have the potential to cause trouble. If this wasn’t enough, Oko also starts with a ton of loyalty, making it hard to get rid of.

Oko’s ability to turn creatures into an Elk sets it apart from other Planeswalkers in Commander. This transforms the creature into a 3/3 Elk with no abilities. While this can be devastating in normal circumstances (partially why Oko is banned in everything under the sun), its even worse in Commander. Transforming an opponent’s Commander into an Elk can be devastating, as the Elk cannot return to the Command Zone until it dies. This creates an Oubliette-like effect that can trap Commanders for an undisclosed amount of time. Oh, and before I forget, that Elk ability Oko has is a +1… Because of its ability to shut down Commanders for an extended amount of time for no cost, Oko is an incredibly salt-inducing Planeswalker to face down in Commander.