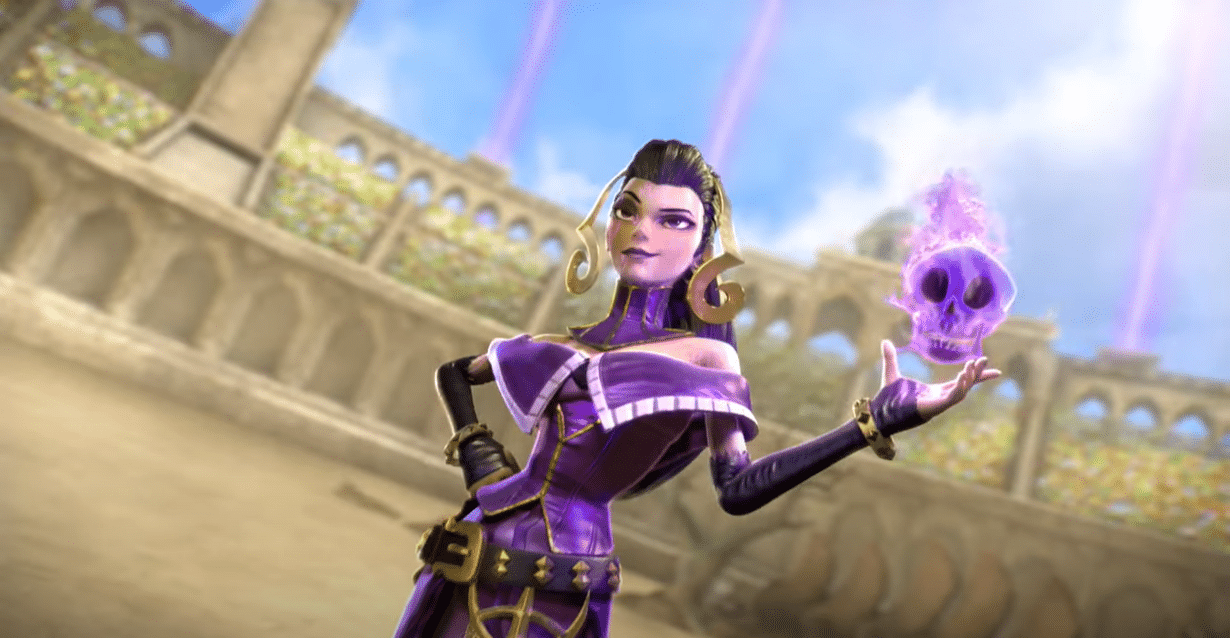 MTG’s Spellslingers had a relatively quiet official release last week but is quickly picking up speed. This mobile game has been in beta for a few years and was finally released for public access! This mobile game plays like a mix between MTG and its digital competitor Hearthstone (leaning more on Hearthstone’s direction, in my opinion). If you have a history with these games, like me, or have even fancied trying them, this game may surprise you. It’s pretty good!

MTG Spellslingers How to Play

Much like Hearthstone, MTG Spellslingers has a ‘Spellslinger’ or Planeswalker that you can play as. This is similar to playing as a class (Mage, Shaman, Warlock, etc.) in Hearthstone. Each Planeswalker has a special ability and unique cards and is allowed to play different cards in their deck.

Much like MTG, there are five colors of cards available in Spellslingers. Following MTG’s color pie, these colors are White, Blue, Black, Red, and Green. In addition, there are also colorless cards that can be played everywhere and multicolored cards that count as two different colors at the same time.

Generally, the colors that Planeswalkers can play match their color identity in MTG. Mono-colored Planeswalkers like Jace and Liliana can only play their respective colors (Blue and Black) while splashing a few cards in another color of their choice. (generally, six is the number of cards you can splash in a 30-card deck). Multicolored Spellslingers like Angrath and Teferi can play both colors in their identity but cannot splash. There are exceptions to this rule. Nissa, for example, can play green while splashing six cards in any color.

There are no Lands

Like Hearthstone, mana is instead gained per turn rotation. All of the cards in your deck are essentially threats with mana costs. However, there is more interaction in Spellslingers than Hearthstone since combat still functions similarly to MTG terms.

You can kind of choose to attack whenever you want, but whenever you do attack in a turn, that’s your combat phase for the turn (you can’t attack with something, play something else and attack with it). In Hearthstone, you’re free to attack whatever legal choice you want to. In Spellslingers, like MTG, the blocker still decides what creatures are fighting one another and what gets through without resistance. Be careful though! There is no double or triple blocking in Spellslingers. Only one creature can block another. This makes gigantic trampling threats a lot scarier. Yes, this means that Colossal Dreadmaw is actually a decent card.

Another distinct difference from MTG is that your creatures will not regenerate their toughness on their own. Like Hearthstone, damage needs to be healed by outside sources to disappear from a creature that’s endured injuries in combat.

Unfortunately, the economy is confusing and challenging to understand. It is, in my opinion, manageable once you learn to navigate it.

The crafting system generally requires the player to join a team of some sort to take advantage of it properly. This makes it much more challenging to play Spellslingers alone. Even if you just join a team to get some of the mission rewards, it will help you craft the cards you need to complete a deck.

Should you actually play with the people on said team, you can request crafting resources from your teammates to help craft the cards you need. This alone is a considerable benefit unique to Spellslingers. If you communicate with your playgroup, it’s not impossible for all everyone on the team to have something close to a meta deck rather quickly. Since your crafting resources care about colors, you can each pick a color to play and optimize that way.

There are only a few other ways to get cards. Daily deals will be available in the store to exchange your coins (comparable to gold in MTG Arena) for some underpriced singles. Otherwise, you can craft the cards or open packs. It takes a while to grind for free packs, so time is an important factor here. This will impact heavily what Spellslinger decisions you make. While all the characters are relatively playable with a complete collection, some are much harder to assemble. Depending on your play style, we will recommend what Planeswalkers you should consider when starting off.

To start, we should clarify that you must unlock Spellslingers as you progressively obtain cards and other rewards throughout your gameplay. You need a decent amount of resources to unlock a Planeswalker, so your early decisions will be crucial in how easy it is for you to unlock more of them. Multicolored Planeswalkers can only be unlocked once you progress to a certain point in the game (the bronze league, which should be easily obtainable by playing some games with a slightly upgraded starter deck), so we recommend you hold back on your decision to choose a Spellslinger until then unless your heart is set on your favorite Planeswalker.

In terms of class division, MTG Spellslingers shares the common archetypes that the TCG has. Aggressive decks are aimed at… well, being aggressive. Your goal is to kill your opponent before they can get the core of their game plan up and running. Notably, your starting Spellslinger will be Chandra, who is clearly slated for aggressive strategies. Her ability allows you to deal four damage to your opponent out of the gate, pressuring them before the game even starts. Since you have Chandra at the beginning, you should already have some good aggressive cards to play. Angrath seems like the best aggressive Spellslinger currently available in the game, but Gideon’s ability to attack with an indestructible 4/4 whenever three or more creatures attack should not be slept on. If you’re interested in aggressive strategies, I would recommend one of these. That being said, there are better heroes to pick at the start of your journey.

This is where the majority of the Spellslingers fall. A good amount of midrange characters are quite powerful at the beginning of the game, so if you’re comfortable playing this strategy, I would stick to it. Liliana and Kiora are both incredibly powerful picks that have good toolboxes out of the gate. Relentless is sort of like Persist from MTG, but instead of coming back with a -1/-1 counter, the creatures that return cannot block. Liliana even boosts their stats and gains life whenever something comes back, making each of her Relentless cards essentially a two for one.

Kiora is also a pretty powerful pick. Green has some insanely powerful common cards like Angler Wurm that can regenerate its toughness at the end step. Kiora can also access some incredibly powerful leviathans at certain mana thresholds. Kiora has access to powerful common ramp spells like Plot to speed things up. The point is, Kiora and Liliana can build pretty powerful decks without investment. These aren’t the only midrange Spellslingers available, but they are the ones I would consider when the game begins.

To the surprise of absolutely no one, Jace and Teferi are the control Planeswalkers of choice on Spellslingers. Counterspells are available in Spellslingers, but they function similarly to Hearthstone’s Secret cards.

Referred to as Traps, you can choose to set these cards with open mana that you possess at any time. All of these spells have a condition that causes them to trigger. Teferi’s Absorb, for example, functions similarly to the spell in MTG. The Trap triggers whenever an opponent tries to play a spell with a mana value of three or more. The spell is countered, and Teferi gains three life. Unlike Secrets, Traps can trigger on your turn. This was used to emulate combat tricks in the form of Giant Growth.

In terms of what control Spellslinger you should pick, we recommend Teferi. Like Kiora, you cannot unlock Teferi immediately, but the wait is worth it. While Jace’s innate ability is an Omniscience-equivalent that cares about drawing cards, it ends up being too slow at low-level play for the most part. Teferi’s core cards are also potent, making him an adept choice with some work. Midrange and Aggressive strategies are more friendly for starting players, but control can be done.

Combo is, apparently, a potent archetype in Spellslingers. Interaction is generally weaker, so this makes sense from an MTG standpoint. I say apparently, however, because Combo decks are hard to put together at the beginning. Ral Zarek is your go-to Spellslinger for Combo aficionados but is terrible without some investment. You can make this a goal if you think your Spellslinger stay will be long-term, but this is not the place to start.

MTG Spellslingers is an excellent investment should you be playing it with friends. Not only is the crafting system advantageous to a group, but you can also share decks amongst others in your group with little effort, a function admired by my friends and me. You don’t need to even be playing at the same time. As long as you can communicate, you can take advantage of the game’s benefits in a group setting. Spellslingers is much more challenging to get into alone, but the game plays smoothly.

Spellslingers has a relatively easy learning curve, with the only downside being how difficult the economy can be to navigate, especially as a free-to-play player playing alone. Regardless of your situation, Spellslingers is good enough to warrant a try from anyone interested in the mobile TCG genre. This is a very general review and introduction to MTG Spellslingers from the perspective of an MTG and Hearthstone player. Should the game pick up speed, we will be sure to write some more detailed guides and deck techs to help you get ahead! Take up Liliana, Kiora, or an aggressive Planeswalker, and see what you can do! You can find more information and links to download MTG Spellslingers from Wizards of the Coast here.