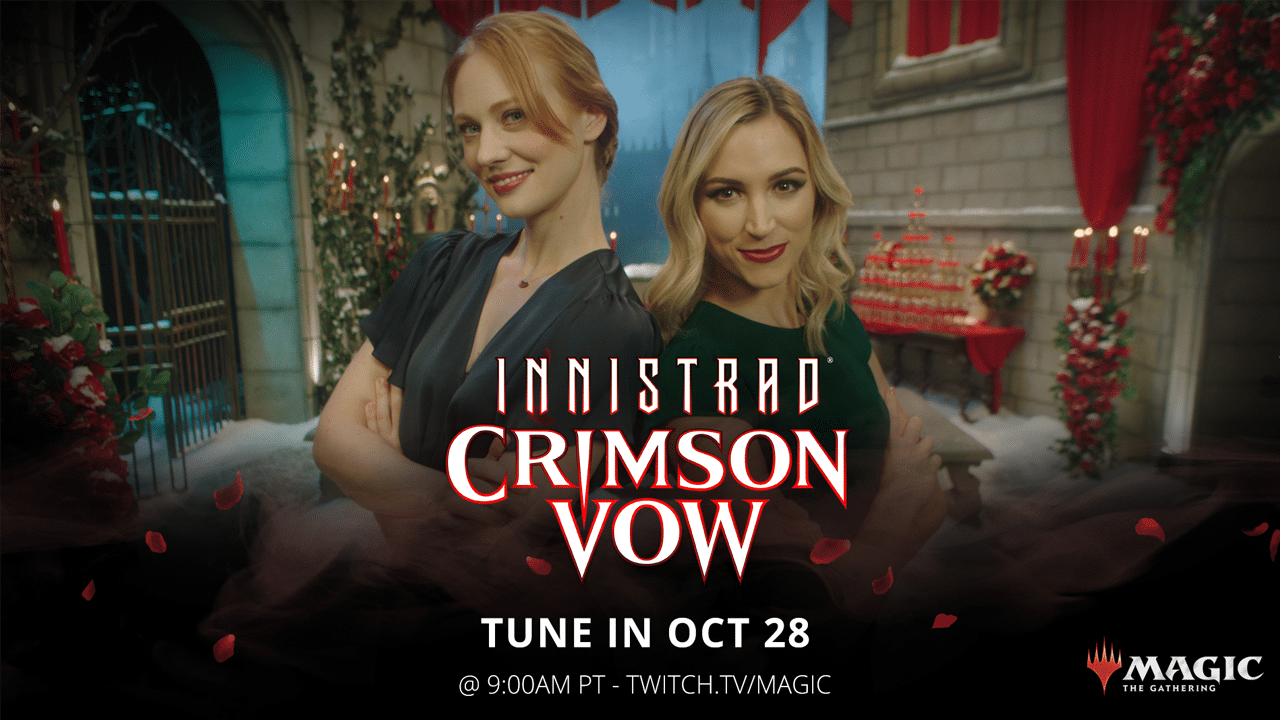 The time has finally arrived for the start of Innistrad: Crimson Vow preview season and boy oh boy is this one going to be awesome! Today we had the very first look at some of the amazing cards from the set in the Crimson Vow debut video, featuring Becca Scott and Deborah Ann Woll!

We got treated to a good number of sweet new cards from the video, so let’s get into it!

The lady of the hour, Olivia Voldaren, was the first to be shown in her new form Olivia, Crimson Bride. We also got shown the Showcase frame for the set, the Fang Frame. Olivia is aimed to be the big boss monster in Vampire decks, and she has a very powerful ability to go with it.

Next up, we have our first Planeswalker of 3, Sorin the Mirthless. Sorin got a little face lift, and he’s showing more of that traditional gothic vampire style. This card fits in nicely to the vampire aggro decks. The last Sorin art that’s in the Fang Frame is done by Legendary artist Ayami Kojima, who is known for her art in Castlevania. The art is stunning and by far my favorite Sorin art.

We now know what the “powerful and popular Innistrad creature” card that MaRo teased is, and it’s a doosey. Thalia, Guardian of Thraben is making her way back to Standard! We’ll talk more about her in another article, as she could have a pretty big impact on the Standard format!

READ MORE: 10 Most Expensive Magic: the Gathering Cards in Innistrad

We also got shown the finishing of the dual land cycle from Midnight Hunt, with the enemy versions of those dual lands. These are also getting the same borderless treatment from the last set as well and the art on these looks awesome.

We got a host of other cards during the stream as well, some of which are showing off some of the new mechanics in the set! We’ll cover those in another article, but some of the notable cards here are Dorothea, Vengeful Victim / Dorothea’s Retribution. The back side of the card is effectively Geist of Saint Traft‘s ability, which is pretty cool. Also, Torrens, Fist of the Angels is a crazy card for humans decks.

There’s plenty of more cards to come, a bunch of them dropped today! Make sure that you check out our Preview Gallery to stay up to date with all the new cards! Innistrad: Crimson Vow will be releasing on Magic Arena and Magic Online on November 11th. Tabletop Prerelease is November 12th and 13th. The set releases on Tabletop on November 19th. Innistrad: Crimson Vow product can be preordered over at Amazon and TCGplayer as well.