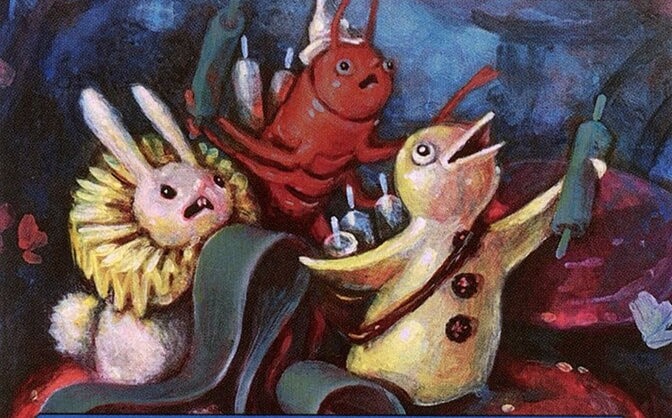 New MTG Secret Lairs are now out in full force! These direct-from-Wizards of the Coast products take an excruciatingly long time to ship out for what is only a few cards. That being said, the Bonus slots for this round of shipments have been incredibly versatile, with new cards being discovered daily. Sure, there are many new Secret Lair Bonus cards out there, but with the sudden flood of undiscovered cards, players are now starting to ask a different question: how rare are these?

This is more of a player than a company issue, but with these cards being unannounced, we have no idea how rare these cards are. Persistent Petitioners are a series of full-art bonus cards that have been present in Secret Lair Bonus slots since the last round of products went out. Even though these have been around for a little while, one Reddit user discovered yet another art for these chase cards just this morning. A few of these have been spoiled on Reddit, so there’s a good chance they are not as rare as their previous counterparts. That being said, this Persistent Petitioners’ art is just as beautiful as the rest. In terms of price, Persistent Petitioners are all over the place. At this point, prices are arranged as a guess as to how rare each artwork for this card is.

Prices between these cards have huge variation, and it is purely based on speculation. If you’re lucky enough to open this recently discovered Sliver Hive Bonus Card, you just chanced upon a $400 windfall! That being said, these may not be rare at all, as players are still waiting for their Secret Lair to be received. This puts potential buyers into an awkward position where there aren’t any market expectations on these cards. Don’t get me wrong, these are an incredibly cool promotion for the Secret Lair bonus slot, but I sure as heck don’t want to be in the market for these. There’s too much uncertainty.

Waiting is a Double-Edged Sword

These cards are going to have a pretty niche market surrounding them for the most part. Cards like this Ornithopter discovered by a Reddit user don’t have a ton of playability across different formats. If players are disinterested in these promos, or they are way more common than what secondary markets are experiencing right now, then a potential buyer gets ahead. Once again, the issue with no information is that the player base has no idea. Maybe there are only ten copies of this in the world, and the price will spike in the future.

Read More: MTG’s Treasures May Soon be a Thing of the Past

Pringles are Lessening the Impact

Whatever sort of marketing strategy Wizards of the Coast is implementing with this, there is a significant hole with the foil cards being sent. A majority of these promotional cards are being mailed to owners pre-bent. This ‘pringle’ issue has been around for a while. Unfortunately, because of the material that WoTC uses to create foil cards, they are negatively affected by humidity and curl. While players can find products to counteract these curls, they shouldn’t have to buy a different product to fix another company’s faulty product.

One nice thing about the mirrored Viscera Seer promos is players knew precisely how many were being printed. Because these were numbered, everyone knew that only 100 Viscera Seer were in existence. Even though these cards are rare, there won’t be much demand for them. Viscera Seers aren’t even worth a dollar in their most common version. For players who want the card to play with, there is little reason to spend hundreds of dollars on a fancy one unless that collectible factor is what you’re after.

How Much Would you Spend?

The treatment of these cards makes their status on the secondary market different. Large stores are putting a hefty price tag on them, but that doesn’t necessarily mean that these cards are worth it. There are no competitive play aspects or expected rarity. The whole thing is a guessing game, so as cool as these promotions are, be careful if you want to purchase them.