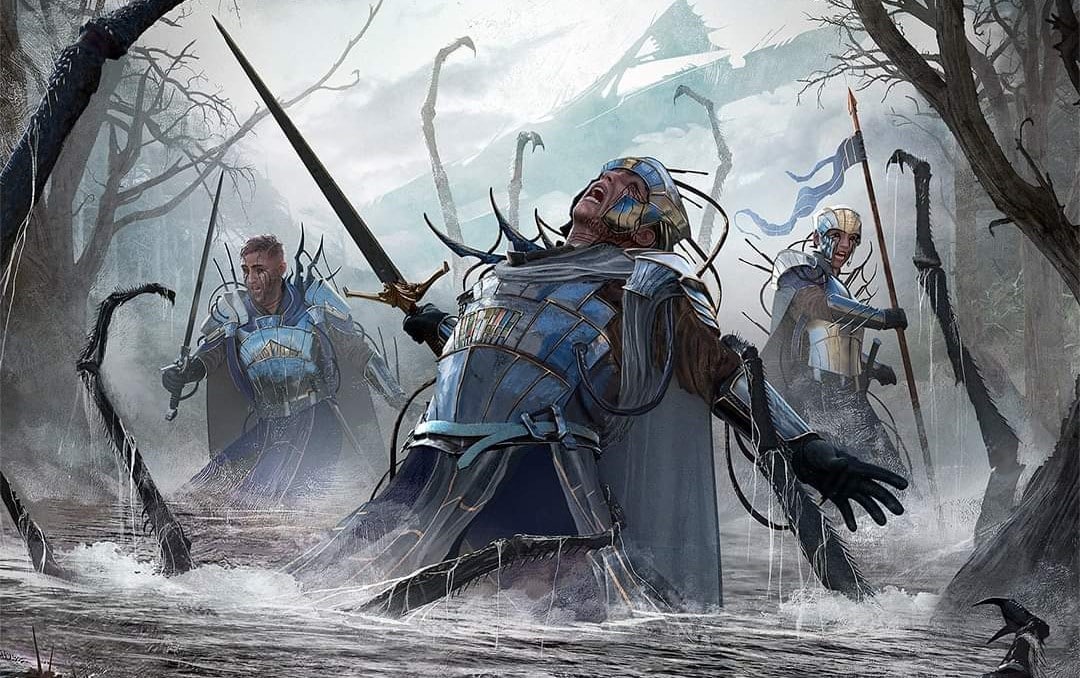 The MTG secondary market is going through a lot of change. As players play in paper more often, the secondary market slowly comes to life. Dominaria United preview season has also joined in, spoiling new incredible cards that make the market go nuts with predictions. Commander players seem to be the overall winners here, with recent market trends indicating it as the biggest mover. While this is all going on, some MTG financial experts fear one particular trend. We may be witnessing the end of one of MTG’s oldest product lines.

What seems like an average price for a Booster Box is actually a lot more than that. As Redditor u/GSOwner and some financial Youtube personalities pointed out, some stores selling Dominaria United Booster Boxes on TCGplayer are currently doing so at a net loss. That means these stores are losing money on every box they sell.

The math is not available to those on the front end, and while no one has given exact percentages, everyone is sure that some sellers are suffering a loss. Considering that TCGplayer’s fees are about 15% and the new cost per Draft Booster Box for Local Game Stores (or LGS for short) is $85-95, it is not difficult to construe that the original seller may suffer a loss, especially when shipping is included. For an LGS to make any money at all, Dominaria United Draft Boosters may need to be sold at $120 or more.

MTG Products Are Getting More Expensive

For those wondering why some LGS may be losing money on boxes, manufacturing prices worldwide may be the culprit. For those who forgot, a few months ago, Wizards of the Coast announced that all of their products would see an 11% increase in terms of price. This is because “the costs of goods, transportation, and manufacturing have increased significantly and steadily for just about everyone across nearly every industry.” As mentioned in the picture above, this price increase mainly comes online during Dominaria United’s release. Even though Dominaria United Draft Boosters match the price of older sets for buyers, they are more expensive for sellers to buy from their distributors.

Wizards of the Coast is going all-out for their 30th anniversary. Collector Booster Boxes will have access to cards from MTG’s original Legends, multiple Commander legal Box-toppers, a foiling technique thought to have been exclusive, and a new stunning Stained-Glass art. These boxes look incredible, and it’s easy for MTG players to get excited about them! What about plain old Draft Booster Boxes? None of these shiny new promotions are going in those. It is simply what we are used to for a higher price.

We have already begun to see price hikes appear on the market in the form of New Capenna’s Commander decks. Wizards offset this price hike by offering players a special Collector Booster pack that provides a few cards as a teaser for players to consider Collector Boosters in the future. This should not cost very much for Wizards to produce, and it helps players digest the price increases. No such supplementary product has been announced for Draft Booster Boxes.

The revelation stated in the title likely means one of three things for the future of the Draft Booster Box line. As has hopefully been portrayed by the article at this point, LGS aren’t going to settle for this business model. Multiple stores that do not have an intense draft scene are already opting out of carrying this product at all, with MTG guru Alpha Investments, who arguably spearheaded this topic, stating that he will not be selling this product in any way. One possible end of this story is that Draft Boosters will disappear from the online marketplace. They may only be carried by LGS, expecting to host drafts, as these stores may be the only ones making money from MTG’s base product. Take this a step further, and Wizards of the Coast may discontinue Draft Booster Boxes entirely, leaving Limited for online players to enjoy.

Another possible end to this story is that these boxes will see a price increase simply because they have to for sellers to make a profit. This seems to be the most likely candidate at the moment since Dominaria United Draft Boxes are seeing an uptick in price on TCGplayer. That being said, sellers are unlikely to make much of, if any, profit off these boxes. The $85-95 dollar distribution price is incredibly significant here, as that difference in price may be all the money that an LGS is making per box. For a while, these Dominaria United boxes were selling for $106. This is undeniably a loss for sellers.

At the current price of $115, stores stand to make about $5-15 depending on the Distribution price of these boxes. Should they have to pay for shipping in any way, this profit may disappear. Because of this, players who want some Draft Booster Boxes for themselves may want to consider picking them up as soon as possible. If this solution is the one to stick, Booster Box price increases will likely not end here.

The last possible line may be a combination of Draft and Set Booster Boxes. This one is a bit more speculative, but as long as Set Boosters follow the Common and Uncommon slots for Draft Boosters, we could see a fusion of these products; following the discontinuation of Draft Booster Boxes. What may result are Limited formats with more Rare cards in them. As long as there aren’t too many Rare cards that have heavy impacts on the game, like Dreadfast Demon from Crimson Vow, this may not be a bad thing.

What Will be the Fate of Limited?

Limited is my favorite format. I love meeting up with the regular LGS crowd, throwing a deck together, and battling it out with something different every week. For the sake of the many who also enjoy an occasional draft amongst the diehard fans that make up MTG, Draft Booster Boxes should find a home. If that means that these boxes are going to increase in price, so be it. That is still a better end than the disappearance of one of MTG’s oldest product lines. This is how they’ve been doing things from the beginning. It’s all the older players have left. Much like the symbolistic representation of the Compleation of one of MTG’s oldest icons, we may soon be sunsetting some more MTG history.